Controversial when it was built in 1970, the Hôtel Sofitel Bellecour eventually became an integral part of the Place Bellecour, the landmark main square of Lyon, France. Over the years, however, slapdash renovations left the hotel a “patchwork catastrophe,” Patrick Norguet recalls. Its owner, Groupe Accor, commissioned Studio Norguet to update the property as part of a master plan to reposition the aging hotel as a luxury property.


Norguet’s $10 million, two-year renovation did not include the facade or the guest rooms, just 23,000 square feet of public areas: the lobby and adjacent bar and brasserie and the penthouse restaurant and bar. His plan was to restore what he calls the hotel’s “nobility.” He began by delving into Lyon’s illustrious silk-weaving past. From the Renaissance until the early 20th century, the Rhône capital’s sumptuous silk brocades and jacquards furnished grand châteaus, including the Palais du Louvre during Napoléon’s reign, and clothed their privileged residents. 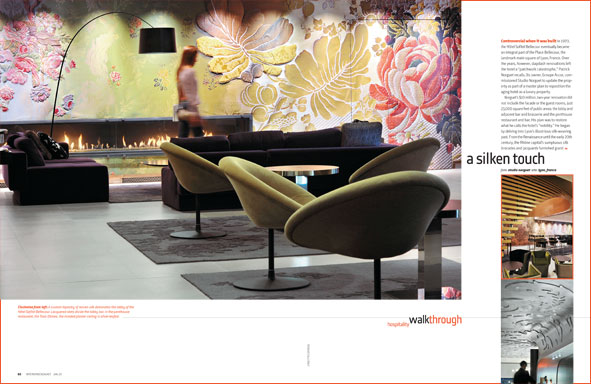 Little is left of the silk industry, but Norguet found a local manufacturer, established in 1680, that still produces silk on wooden looms alongside modern technology. Plowing through the company archives, he had hundreds of historic patterns photographed and combined via computer magic—mixing periods, motifs, and sizes. The images were then printed on simple cotton, with embroidery added to produce floral tapestries for the hotel lobby. A similar pattern appears on the silk rugs scattered across the stonelike ceramic floor tile, anchoring chairs by Pierre Paulin and Arne Jacobsen.

Leggy white button-tufted armchairs by Philippe Starck were Norguet’s choice for the hotel’s Michelin one-star restaurant, the Trois Dômes. Here, he brought in another artisan to create the silver-leafed molded plaster surface that wraps part of the ceiling and walls. In the adjacent Melhor bar—which he describes as “red, dark, and sexy”—the ceiling is a multilayered composition of floral cutouts, a nighttime version of the lobby’s mural. Light shines through the gaps between the floating flower shapes, reflected in the mirrored tops of the round cocktail tables scattered among the aubergine tub chairs.

The ground-level brasserie’s armchairs are black, either upholstered designs or an update on Michael Thonet’s bentwood classic. Orange banquettes run along opposite walls, backed by black-and-white photomurals of local architecture, while shorter, freestanding banquettes are wrapped by white marble partitions. Long a favorite with Lyonnais regulars, the brasserie has now been rechristened . . . what else? Silk.