Talk about the intersection of talent and luck. Not every day does a speaking engagement segue into an 8,000-square-foot commission. But that’s what happened, somewhat circuitously, to Hagy Belzberg. When he presided over a fundraiser at Patina, the restaurant that he’d designed for the Walt Disney Concert Hall in Los Angeles, a married couple planning to open a restaurant had the chance to experience his work firsthand, and they really tuned in to his thinking as he discussed the behind-the-scenes spatial strategies and digital applications that played out in Patina’s carved wood paneling and ceiling. Several months later, when the couple approached Belzberg Architects about a proposed site, he did the due diligence and told them the property wasn’t viable. “I just talked myself out of a job,” he recalls lamenting to his own wife. But the clients returned. This time, the site was an acre in Kona, on the lava-rich side of Hawaii’s Big Island, and the plan was to build a family vacation compound, the sole contemporary residence in the traditional enclave of Hualalai. 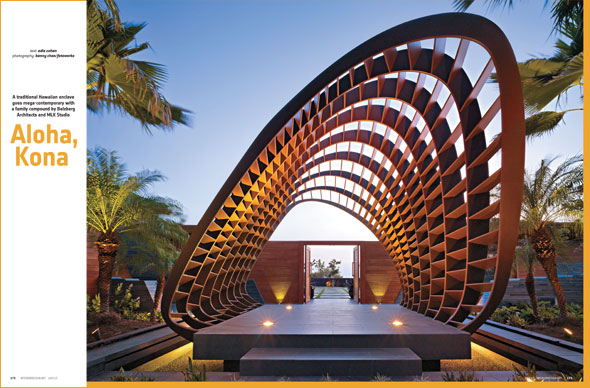 Broad strokes came fast. The couple were looking for “a series of pods and a strong visual element pointing to the sea on one side, the volcano on the other,” Belzberg says. All, naturally, would stress an indoor-outdoor connection. The architect, for his part, pictured “a Hawaiian influence with an edge.” Nothing remotely kitsch. Indigenous materials and sustainability would factor into the program. And, this being an island, he thought that there should be water everywhere. So the concepts coalesced. The main pavilion would house the living and dining areas, kitchen, and master suite. Two separate structures, for the couple’s three children and guests, would have three bedrooms and bathrooms apiece. A fourth structure would house a screening room.

Knowing Belzberg, we were almost expecting to be met with an introductory splash. Call it a folly. Call it a gazebo. This latticework plywood parabola—an inverted basket, to his eyes—was first digitally broken down into a kit of 600 parts to be made in L.A. He then shipped them across the Pacific and assembled them to arch over a lava-stone plinth surrounded by water. Originally meant for nothing more than the wow factor, the gazebo has become a favorite hangout spot, soon to be outfitted with built-in plywood seating.

Only past the gazebo and the screening room does the main pavilion come into view. Its bold forms, slide-away walls, and interplay of warm and cool materials unfold via a breezeway that runs through the center of the complex, beneath beams of reclaimed teak. Belzberg clad walls on both sides in the same wood, on which he mounted a row of conical glass vases displaying the owners’ beloved orchids. Appreciation of the extraordinary detailing requires up-close-and-personal examination. Around the teak wall surfaces, Belzberg built a stepped frame of lava stone. The stacked slabs are held together by precision cutting, supplemented by mortar hidden behind. As you walk along, 9-foot-high windows offer enticing views of a living area dominated by an off-white linen-covered Antonio Citterio sectional on a striped Andrée Putman rug. But nothing forces the entry issue until you reach the breezeway’s end point, a reflecting pool. Now there’s nowhere to go but in.

A firm in the same Santa Monica building as Belzberg’s furnished the interior: MLK Studio , so named for principal Meg Joannides’s maiden name, Meg Lois Kalhammer, not for the civil-rights leader. The living area’s sectional faces a reappearance of the breezeway’s stacked-stone treatment and, sliding out of it, a plasma screen TV. “When Hagy and I work together, it’s like spokes in a wheel,” Joannides notes. “Everything works, from communication to ideas to styles.” Behind the sectional is the dining area, which she mapped out with an oak rectangular table, chairs in oak and raffia, and ethereal black fiberglass pendant globes in three sizes. In the adjacent kitchen, she installed cabinetry of sustainably harvested walnut and counters of crystallized glass or stainless steel. Floor tile throughout the great room is gray sunblock-proof porcelain.

In a sense, the space looks like a transported city loft-but minus the urban toughness, partly thanks to Belzberg’s intervention overhead, a domed ceiling lined with strips of cedar. The Hawaiian reference? “Grass skirts,” he says. Seemingly simple, the installation actually comprises a series of complex curves. It also required searching for a wood able to expand and contract with the humidity. (Once he got it right in the living area, he created smaller versions for the bedrooms.) At the far end of the great room, a wall slides away for access, again, to the outdoors. Here are some choices. How about lunch on the lanai? Or a swim in the infinity-edge lap pool that starts right under the lanai’s teak canopy? Belzberg calls this black monolith a “quiet art piece to reflect the sky, the clouds, and the setting sun.” And you thought the smaller reflecting pool was a stunner.

When the real world infringes, husband and wife have their own offices. His feaures a massive desk with knife-edge drawer detailing. Made from a single oak slab cured for more than 10 years, the custom design was a gift from Belzberg. Did he receive one in return? Absolutely. A bona fide restaurant commission in L.A.