Case Study. That’s the name Dan Wheeler bestowed on an exquisite house built by his firm, Wheeler Kearns Architects, in an increasingly posh Chicago neighborhood. Wheeler intended the project to pay homage to California’s experimental Case Study Houses by Richard Neutra, Pierre Koenig, and other mid-century masters. This residence, however, is a bit more Seagram Building: an art-filled gem finished in sumptuous walnut, limestone, and—just like Ludwig Mies van der Rohe’s landmark tower—bronze. “It’s a ‘case study’ in that we were conscious of fully developing every component of the house and of pushing limits,” Wheeler says. 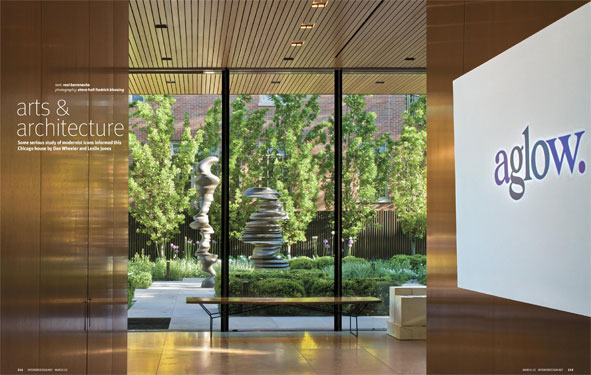 Not even the bronze ventilation grilles and the recessed ceiling fixtures in this deceptively simple 12,700-square-foot structure are off-the-shelf. In the end, Wheeler Kearns and consultants of every stripe produced about 200 architectural and engineering drawings and another 500 shop drawings. “We assembled an amazing body of knowledge,” Wheeler says. “A lot of brain cells were put to good use.” Leslie Jones & Associates, an interiors firm, rounded out the team.

Told that a pair of columns in the living and breakfast areas would distract from the pristine glass curtain wall, the clients asked if the offending columns could be removed. They could, Wheeler explained, but with great effort. So they OK’d an ambitious, expensive structural redesign that resulted in a cantilever more than 40 feet and vertical post tensioning of the underlying concrete caissons that reach 35 feet into the bedrock. That permitted vast column-free public areas and an impressive span of glass.

An unobstructed expanse, however, was imperative. Part of a prominent philanthropic Chicago family, the clients are major modern and contemporary collectors. Works by the likes of Andy Warhol and Sigmar Polke are displayed on all four levels. Cascading through a two-level light well is an installation of metal letters commissioned from Jaume Plensa, whose video fountain flashes 50-foot-high portraits in Millennium Park.

A radical departure from the family’s previous Lincoln Park home, a redbrick Victorian filled with arts and crafts furniture, the new house has multiple modernist precedents: the Mexican courtyard houses of Luis Barragán, Alvar Aalto’s Villa Mairea in western Finland, a Carlo Scarpa Banca Populare di Verona in Italy, and the pristine box that is an Indiana house by Eero Saarinen, with its deft blending of indoors and out. Given the Chicago clients’ request for a strong connection to the landscape, half the 1/3-acre property, assembled from five city lots, is given over to a lushly planted south-facing sculpture garden. This garden visually flows into the public areas through walls of impeccably clear low-iron glass and bronze-framed doors that telescope open to connect the breakfast area to a shady dining arbor complete with outdoor fireplace. Tawny limestone pavers throughout the garden blend with the brush-honed floors inside. Quarried near Dijon, France, it’s the same stone found on the exterior of the Musée National Picasso Paris.

With precise, museum-quality detailing and construction, the open-plan house is as comfortable forthe day-to-day family life as for frequent fund-raisers for 200 guests. The ground level is extroverted, with a 10 ½-foot ceiling and glass everywhere. A double-height dining area, bracketed by towering bookshelves of oil-rubbed bronze, seats 16 at a long walnut table that breaks down into three six-tops. Upstairs, the two bedroom levels are the diametric opposite: inwardly focused, hidden behind stucco walls. Light wells and interior courtyards bring in the sunshine.

Natural materials further tie indoors to out. “The colors and textures were driven by the exterior, what you see through the glass,” Leslie Jones says. Interior walls are lined in various varieties of stained American walnut. And bronze is everywhere, from the door pulls on the mudroom’s cubbies and the basement-level gym’s lockers to the sliding panels that close off a ground-level office, transforming an open work space into a metallic jewel box.

To harmonize with the garden as well as the architectural materials inside, Jones went for furnishings organic in color and form. “It’s a consistent palette,” she says. “Knowing the clients had a major art collection, we didn’t fill the house with too many things.” The public areas’ wool rugs, in different colorways of the same pattern, mimic the sculpture garden’s squared-off islands of reflecting pools and planting beds.

Furniture runs the gamut from Wiener Werkstätte pieces to expressive mid-century chairs by Franco Albini and Osvaldo Borsani and custom seating in sensuous eel skin, goatskin, suede, and mohair. Jones kept the profiles simple and similar in deference to the diverse art collection around them. “The furnishings needed to be sculptures on their own,” Jones suggests. Like the house itself.