As Good as it Gets: Antonio Zaniovic Designs A Cape Town, South Africa House With a View

Born in Chile, Antonio Zaninovic has lived in South Africa since 2006. Ask him why he moved there, and his response is emphatic: “The natural environment is overwhelmingly spectacular, and there are great opportunities to design architecture that relates to the landscape.” Indeed, the site of a house that he built for a Peruvian man is breathtaking. Right at the foot of Table Mountain, the hillside property affords not only a sweeping view toward downtown and the ocean beyond but also a great sense of seclusion­, with only one neighbor on the same street. Lucien Rees Roberts, brought in by Zaninovic to handle interiors and landscaping, finds the tranquillity particularly appealing. “I like houses that are a refuge from the chaos of life,” he enthuses. 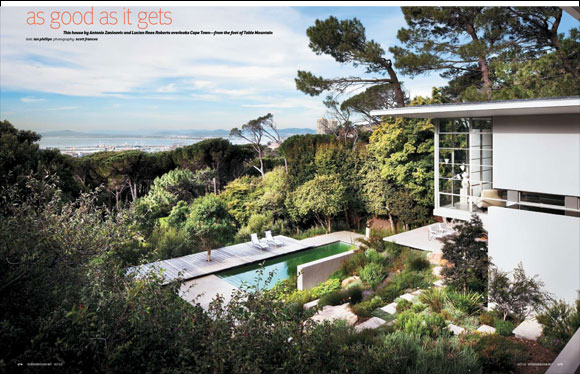 The 4,250-square-foot project isn’t the first collaboration between Rees Roberts and Zaninovic. Before founding Antonio Zaninovic Architecture Studio, he worked at New York’s Steven Harris Architects. That’s the firm most closely affiliated with Rees Roberts + Partners, since Harris and Rees Roberts, inducted simul­taneously into the Interior Design Hall of Fame, have lived and worked together for many years.

While plantings for the Cape Town project include shrubbery that grows wild at the base of Table Mountain, making the house feel at one with nature, Zaninovic’s architecture acts as a deliberate counter­point to organic. He describes the design as “austere,” marked by pure volumes and strong horizontals. (The only vertical element is a tower housing mechan­ical systems.) However, windows frame the views beautifully. A clerestory and a window seat, for instance, offer different perspectives on Table Mountain.

Opening up the house unfortunately risked exposing it to the Cape’s sometimes ferocious wind. “Its quite terrible,” Zaninovic says. “Even for me, it becomes a bit much after two weeks.” In order to protect the structure, he came up with a number of solutions. Positioning the house below street level allows the slope to act as a buffer, as does a series of courtyards. He also oriented most windows and doors away from the direction of the prevailing winds. Other climate considerations had to be addressed, too. To shade a patio’s sitting area, the volume that contains the living area juts out 8 feet. “Even in winter, the sun is very, very strong,” he says. And water elements, strategically placed, cool the breezes before they reach the interiors. For example, a reflecting pool runs alongside small operable windows at the base of an otherwise solid plaster wall in the living area.

Although the owner had few specific demands, he was keen on indoor-outdoor interaction. To that end, the reflecting pool outside the living area actually starts in the foyer; a glass wall dips only 4 inches into the 16-inch depth, allowing the water to flow freely. In the master suite-which is like a big loft with the bed, a sitting area, a desk, and a bathtub all out in the open-the tub sits in a corner where one wall is practically all window, and the other is a glass pocket door that slides completely away. The patio directly outside the master suite can be used for watching movies when a projection screen is pulled down, and a patio next to the dining area is where barbecues take place.

The landscaping imitates the muted palette of the inte­riors-decoration is definitely more about texture than color. “Enjoying sumptuous, tactile materials” is how Rees Roberts describes it. Among them are the living area’s paneling in a hardwood similar to mahogany, the pony skin on chairs in the living and dining areas, and the goatskin rug in the master suite. For flooring, vanities, counters, shelving, and platform beds, the designers used a mixture of white cement, marble dust, and sand, a combination specially concocted to produce a grittiness reminiscent of limestone. “The goal was to see just how minimal and sculptural the interior could be,” Rees Roberts says. “It lets the furniture be read quite simply.”

Many pieces have impressive pedigrees. The foyer’s cantilevered side chair is by Preben Fabricius and Jørgen Kastholm, and a pair of lounge chairs by Milo Baughman sit by the window wall in the living area. Items from South America give a nod to the owner’s origins. There’s a rosewood armchair by a Brazilian, Jorge Zalszupin, in the living area, not far from a large, colorful canvas by a Chilean, Francisco Bustamante. A low glass-topped rosewood table in the master suite was bought in Rio de Janeiro. Local sources were rather less helpful. “It’s not easy finding good modern furniture in the Cape,” Rees Roberts laments. One of the few things that originated in Africa is the spa’s 19th-century stool from Mali. He bought the two 1960’s swivel chairs in the living area because their upholstery reminded him of the hides of cows indigenous to southern Africa-a strange coincidence, given that he found the chairs at an antiques store in Hudson, New York.