The royal palm is the tree most associated with Miami, where Chad Oppenheim is based. You’re more likely to find a cedar or a pine south of Zurich, on the shore of the Obersee in Rapperswil-Jona, where the landscaping firm Enea was planning an arboretum. 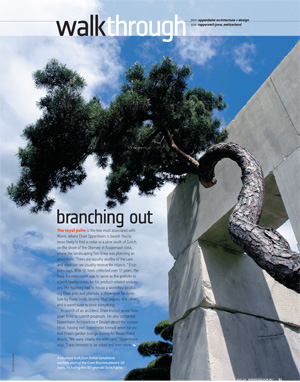 “Trees are equally worthy of the care and attention we usually reserve for objects,” Enzo Enea says. With 50 trees collected over 17 years, the Enea Baummuseum was to serve as the prelude to a joint headquarters for his product-related endeavors: The building had to house a workshop producing Enea pots and planters, a showroom for furniture by Paola Lenti, Jerome Abel Seguin, and others, and a warehouse to store everything.

In search of an architect, Enea invited seven European firms to submit proposals. He also contacted Oppenheim Architecture + Design about the competition, having met Oppenheim himself when he visited Enea’s garden lounge during Art Basel/Miami Beach. “We were clearly the wild card,” Oppenheim says. “I was honored to be asked and even more honored to win.”

Long and low, his 27,000-square-foot building is a paean to the surroundings. In front lies the Enea Baummuseum, where such rare specimens as a saucer magnolia and a full-moon maple range from 30 to 130 years old. Leased from a Cistercian monastery, the 2 ½ acres belong to a much larger park that stretches behind the building. “It’s a place of contemplation with an aura of immortality and an awareness of time,” Enea says.

Oppenheim explains that he “decided against a bravado piece in favor of a building that would establish a quiet boundary between the tree museum and the park.” He goes on to note that, beyond mere pragmatic components, the structure is a poetic gateway, sited “at the end of the entry axis, an allée of trees.” In fact, that kind of thinking pervades every Oppenheim project, whether it’s a condominium tower in Miami Beach or a hotel in Washington. “We’re always trying for the garden moment,” he says. “Then we build around it.” Credit his five-month fellowship in Tokyo, studying Japanese gardens during his undergraduate studies at Cornell University.

Which isn’t to imply that he ignores functionality. To differentiate the Enea headquarters’s three components from one another, he set the workshop at a 20-degree angle from the showroom and warehouse on either side. Distinctive vertical fins, camouflaging and unifying the front of the workshop and warehouse sections, were inspired by the sight of the forest clinging to mountains in the distance. The wood for the fins is a local cedar, sustainably harvested-“the Swiss are great at that”-and glass strips between some of the fins allow plenty of sunshine in, as do skylights.

An uninterrupted glass curtain wall fronts the showroom, so approaching customers can see in, while people inside enjoy the view of a man-made pond, a factor that figured prominently in Oppenheim’s scheme. Profiting from Swiss precision workmanship, he engineered more than a dozen of the curtain wall’s steel-framed panels to retract mechanically into the ground. When they do, personnel and visitors can drift outside to share conversation, coffee, and chocolate on the deck, sheltered by a deep overhang.

The interior is as elegant as its container. Flooring is polished concrete, and everything is open but the restrooms, which share a quasi-pavilion wrapped in horizontal strips of reclaimed ipe. The lacquered reception desk backs up to this structure-and that’s pretty much it. Next door in the workshop, materials get more pared-down still. There’s particleboard on the walls, industrial steel shelving and long tables, and the necessary machinery.

A planted roof is the main sustainable element of this decidedly eco-conscious building. In addition, Oppenheim enumerates geothermal climate control, triple glazing, and motion sensors for the fluorescent lights and LEDs. Figuratively speaking, that makes his architecture the same green as Enea’s trees.