Conference rooms tend to be straightlaced places, booked by the hour. Not so at MTV Networks in Berlin. Here, meetings might happen around a kitchen table, in the shade of tree sculptures in a glassed-in atrium, or in a game room while Ping-Pong balls zing back and forth. It wasn’t always this way, however. 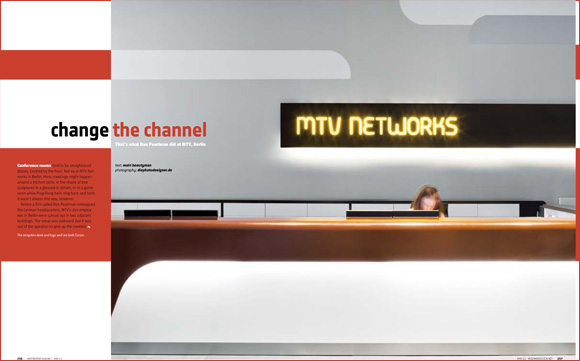 Before a firm called Dan Pearlman redesigned the German headquarters, MTV’s 250 employees in Berlin were spread out in two adjacent buildings. The setup was awkward, but it was out of the question to give up the coveted location near bars, cafés, and the floating swimming pool in the River Spree. So MTV decided to renovate and reconfigure one of the offices to accommodate everyone. While work space, predominantly on the three upper levels, received only minor redesigns, including spruced-up kitchens, the reception, conference, and break-out areas on the two lower levels were transformed to broadcast the MTV brand.

The 7,700-square-foot project was spearheaded by Marcus Fischer, one of the four young architects who invented the name Dan Pearlman as their fictitious older adviser. Starting in MTV’s reception area, Fischer says, he set out “to make this dark, monolithic interior much cozier.” He also embraced MTV’s corporate colors, chocolate brown, sunny yellow, and white. The combo first appears in reception’s backlit Corian logo wall and upholstered modular seating. The adjacent café, where staffers get their morning coffee fix overlooking the river, is a brown Corian box lined with yellow-painted drywall and outfitted with white chairs.

Most dramatic are the changes on two, where Fischer opened up a huge central swath of the floor plate, front to back. “We made a strategic decision to replace seven closed-door conference rooms with two nontraditional spaces,” explains Sebastian Unseld, MTV Networks vice president of finance for Germany and Austria. “This loose format makes work flow more efficient—when you book a standard conference room for an hour, you tend to stay for that hour, even if you don’t need to.”

By far the larger of the two conference spaces is the atrium with the tree sculptures, their trunks sprouting from the tops of six tables to support canopies of finlike branches. “The trees function as umbrellas, creating a bit more of a closed situation. It’s a huge volume, and people could have felt a bit lost,” Fischer says. The long tables are again brown-and-white, with one end that curves downward in a nod to the shape of?the M in the MTV Networks logo. Matching benches accompany half of the tables; the remaining half are paired with klismos chairs from before the renovation—their beech seats now lacquered white. For additional seating, he?designed an upholstered island and clustered a few felt-covered floor cushions that resemble giant pebbles.

To brighten things up, Fischer swapped out the acoustical paneling on four structural columns in favor of light boxes showing blown-up photos of sun-drenched green leaves. But he didn’t ignore acoustical concerns. Though he’d left the existing slate floor tile intact downstairs, he replaced it here with smoked-oak parquet. Its dark honey color was another plus.

With the oak parquet extending beyond the central atrium in both directions, a visual demarcation point toward the front of the floor plate takes the form of an enclosure for fire stairs and elevators. On the far side of them, hugging the window wall, is the smaller conference space, which at first seems to focus more on food than PowerPoint. A kitchen-style table with an ash-wood top and Jasper Morrison’s café chairs gather at one end, on a patch of retro black-and-white checkerboard floor tile set into the parquet. Overhead hang a pair of white-lacquered steel pendant fixures, a 1920’s design still in production. “You can use this area for lunch, but you don’t have to,” project architect Moritz von Voss says. “It’s just an alternative communication possibility.”

Like all good suburban kitchens, this one has a sitting area. Fischer furnished it with three red rockers by Charles and Ray Eames, plus the same seating modules used in reception-only in brown-and-red versus the brown-and-yellow before. In a third iteration, the modules appear in brown-and-blue in a lounge on the opposite side of the atrium. Next to the lounge is perhaps the most popular meeting point: It’s a game room boasting both foosball and a chunky blue-and-white Ping-Pong table straight out of MTV’s Teen Cribs.