From the sidewalk outside Revel Spa, a cluster of black bird­cages can be seen hovering above the reception desk. The desk also floats on a narrow pedestal, creating a sense that all the objects in the bright yet tranquil space are levitating. On a typically foggy San Francisco day, it’s easy to feel drawn into this reflection chamber for sunlight. 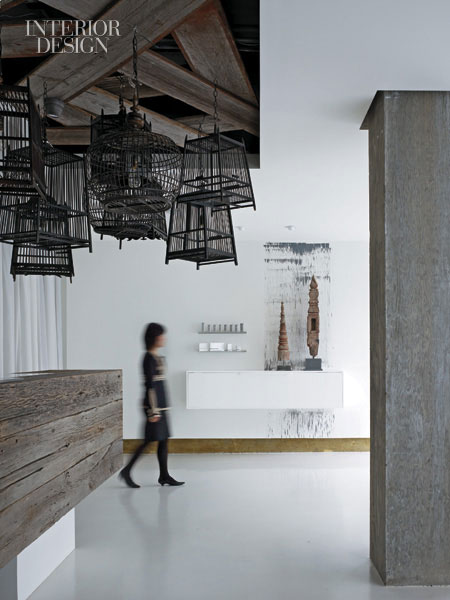 When planning the 2,800-square-foot day spa, Jiun Ho‘s namesake firm transformed the cages into pendant fixtures by placing bulbs where the birds might have been. The installation is intentionally eye-catching, but there remains “a bit of mystery,” Ho says. “You have to come all the way in to really see it.” True to his word, a tour of the spa’s two levels reveals many atmospheric layers beyond the breezy welcome.

A Malaysian of Chinese descent, Ho was urged by the spa’s Vietnamese husband-wife owners, Johnny Nguyen and Mimi Doan, to use Chinese elements as guideposts. Metal, wood, earth, water, and fire all make appearances as the space unfolds. Nguyen and Doan were also interested in following the principles of feng shui and in keeping things simple-an approach that fell agreeably in line with a limited budget and a low environmental impact.

Many elements are either reclaimed or antique, including the birdcages, which Ho found while traveling in Thailand. The ethereal cages, in pristine condi­tion, find a raw, weighty counterbalance in the weathered oak planks that he used both for the reception desk below and for a rectangular aperture in the dropped ceiling above. As the cages hang from the crisscrossed planks, the ad hoc composition “resembles a nest, echoing the birdcages,” Ho says. “It’s also a great way to gain height while concealing the pipes and ducts that the building code required us to leave in place.”

Code and budget restrictions became catalysts for ingenuity­. Just below the exposed pipes and ductwork in the nail salon, oak strips cross from side to side, then wrap down the walls to become manicure stations. It’s a simple concept that works on a psycho­logical level, Ho says. Customers asked, after they’ve left, what they remember about the ceiling tend to mention wood, not pipes and ducts.

Customers who instead descend from the celestial street level to the earthier basement are escorted by water that cascades through the center of the stairwell and into a gold-leafed urn. As a thematic through-line between the two levels, a flock of abstract bird sculptures flies across a wall in the waiting area at the bottom of the stairs-each winged piece is reclaimed metal hand-dipped in white acrylic. From here, a corridor leads to four treatment rooms for massages, facials, and skin therapies.

In three of these low-lit chambers, cozy flannel covers the walls. The East Asian connection is most apparent in the largest treatment room’s en suite bathroom, where a feature wall’s teak paneling is actually the facade of a 150-year-old house, shipped from Thailand. Once the panels were reassembled, Ho replaced the windows with mirrors but left the wood in its original rough state.

After a long hot soak in the presence of this disembodied dwelling, the sensation of relaxation is reinforced by the sight of the framed photographs throughout. All were taken by Ho during his sourcing trips to Vietnam-partly as a way to keep art costs low but, more important, as a way to connect to his clients’ culture. “I believe in only original art,” he adds. Gazing at the mysterious mountains and placid seas, one feels it’s almost possible to cross the threshold into another time and place.