Few things are as emblematic of Brazil as Havaianas—never mind that they’re named for the Hawaiian Islands and inspired by Japanese slippers with rice-straw soles. Launched at markets throughout South America’s largest nation in 1962, these inexpensive rubber flip-flops are now a global phenomenon, sold in 60 countries. The original versions had white soles and pale blue thongs. In 2004, Rio de Janeiro-based jeweler H. Stern introduced an 18-karat gold version encrusted with diamonds. Elsewhere in Brazil, you can find Havaianas at groovy surf shops, rough-and-tumble roadside food stands, and even Daslu, São Paulo’s temple of chic. But there was never a stand-alone store. Until now. 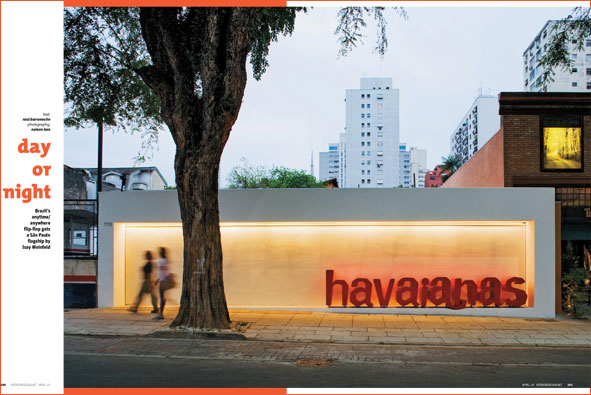 For the first Havaianas flagship, executives chose São Paulo’s fashionable Rua Oscar Freire and fashion-minded Isay Weinfeld. The new 3,200-square-foot building joins several other Isay Weinfeld-designed locations on Oscar Freire, including stores for the Brazilian labels Clube Chocolate and Forum. The street is the equivalent of Rodeo Drive—and Havaianas, although it may have fashion cred, is ultimately about a $25 pair of flip-flops. Weinfeld calls the incongruity “the excitement and joy of the work.”

For Weinfeld, the brand represents “comfort, well-being, freshness, casualness, Brazilian-ness.” Translating that vibe into architecture started with a barely-there facade: a wide, low white-painted concrete frame with nothing inside during shopping hours, except nine red-painted fiberglass letters spelling out the company name. With the store so completely open to the elements, he says, “It’s practically an extension of the sidewalk.” At night, a white-painted steel security shutter rises from a recess at the threshold.

Inside-outside blurring continues with a partially retractable aluminum roof and a checkerboard of skylights. As a result, all is light and air on the double-height sunken sales floor, reached via a sparsely furnished entry at street level, jutting forward into the void, and a staircase that descends to the right. At the bottom, a giant cube with video screens on four sides presents the history of Havaianas in vivid colors. Palms and other tropical plants, growing along the white sidewalls, create the sensation of an outdoor village marketplace. Weinfeld enhanced that mood with the striped awning of a cart packed with baskets and bins of original Havaianas and the latest multicolored flip-flops, standing in the center of the gray stone pavers.

The store sells the complete Havaianas line. Past the cart with the awning, a rehabbed shipping container holds racks of flip-flops made for overseas markets and previously unseen in Brazil. A clear acrylic cylinder showcases new products: towels and tote bags for the beach as well as another footwear-related foray, socks for city life. In an area set off by a few more steps down and a white epoxy floor, shoppers can customize their flip-flops by mixing and matching soles and straps and embellishing the latter with plastic, metal, or crystal pins. Children’s sizes sit on fiberglass display fixtures that fit together like puzzle pieces. On the rear wall, basic monochromatic flip-flops hang in color-coded rows to create a rainbow effect. (Doors set discreetly to either side offer access to a hidden staircase that leads up to a private garden for employees and down to offices and storage.)

Typically, Weinfeld’s interiors are set off by rustic materials. This one is no different. Tree-trunk stools dot the lounge and sales floor, and an entire tree trunk, lying outside the shipping container, serves as a bench. Coconut-fiber matting covers the staircase. In an alcove next to the stairs, beneath the entry, the cashier’s desk is veneered in a striated Brazilian hardwood, as is cabinetry in the mix-and-match area. Still, with the tropical greenery and the market cart, this space is a bit more literal and a lot less subdued than your average high-style Weinfeld interior. That’s well suited to the happy world of Havaianas.