“An intense religious experience,” no less, is what Nuno Pinheiro and António Teixeira of E/348 Architecture intended for the Chapel of Saint Anne in sleepy Santa Maria da Feira, Portugal. The Roman Catholic chapel is the architects’ first nonresidential project, and they saw its completion as a higher calling. “We tried to represent spirituality in terms of space and light,” Pinheiro says. One might draw parallels to the organic curves and irregular constellation of windows found at Le Corbusier’s Chap­elle Notre-Dame-du-Haut in Ronchamp, France. Yet E/348’s design is rooted in local conditions as well. 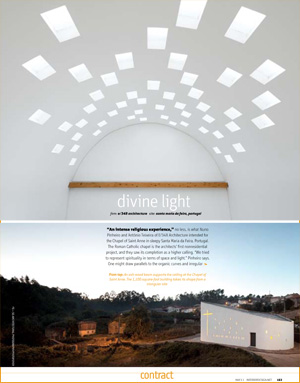 A tiny triangular site suggested the 1,100-square-foot building’s asymmetrical footprint, and the exterior’s sweep of rough-cast white stucco draws churchgoers around to the narthex protruding from the side. Empty except for a solitary statue of Saint Anne, this vestibule establishes an atmosphere of contemplation that increases in the sanctuary, where the scattered windows diffuse the sunshine. “As the small holes ascend toward the apse, they focus attention and elevate devotion,” Teixera says. That’s even more true when a slender cruciform aperture near the altar is illuminated by afternoon rays.

Natural-finished ash wood appears everywhere from the altar to the flooring and what Walter Gropius’s assistant, architect Ernst Neufert, memo­rably described as a “samba” staircase—in reference to the way the floating treads are cut at dynamic alternating angles. The stairs ascend to a concrete pulpit that cantilevers over a terrace used for outdoor religious celebrations. For this congregation, the most important is of course July 26. That’s the feast day of Saint Anne, the mother of the Virgin Mary.