As with many department stores, Printemps, founded in Paris in 1865, grew dramatically over the years, expanding into surrounding buildings. The result was definitely unwieldy. When Yabu Pushelberg was asked to redesign a three-level section of the store, to be rebranded­ Prin­temps de la Mode, what Interior Design Hall of Fame members George Yabu and Glenn Pushelberg found there was hardly Parisian chic. “It was a dump,” Pushelberg says—with a measure of poetic license. “Run-down, worn-out. It was a hodgepodge of stuff, a little bit here, a little bit there. There was no master plan, no vision.” The makeover was a key part of a push to reposition Printemps at the top level of luxury retail after the Borletti Group acquired the brand from François Pinault’s PPR, as in Pinault-Printemps-Redoute. 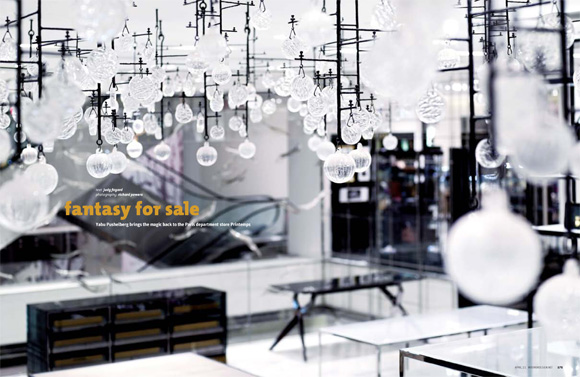 Totaling 107,000 square feet, the basement, ground, and second levels were slated to house high-end accessories: designer handbags, gloves, other leather goods, eyewear, watches, and jewelry. “The sheer size of each sales floor was a problem. You didn’t know where to turn,” Yabu says. “How could we create delight and reduce shopper fatigue?” The first step in the two-year project was, accordingly, to cut a large square hole in the center. Voilà, a 30-foot-high atrium that links all three levels. Ripping out the elevators and centering the atrium with crisscrossing banks of gleaming escalators reorgan­ized foot traffic both vertically and horizontally. Around the atrium on every level is open space ringed, in turn, by rooms or bays for individual luxury brands. Yabu compares the setup to “a piazza or a town square surrounded by shops.”

With so much diversity, maintaining overall unity was important. “It’s not just a collection of brands, like a shopping center,” Pushelberg says. “We treated the different levels as one place. When you’re in the basement, you don’t feel like you’re in a basement.” The three levels share a quiet palette: white, cream, gray, silver, and black, reflected in lots of transparent glass. Floors are gray-veined white marble; tall shelving units that double as dividers are blackened steel. “It’s a visual relief, instead of the cacophony there was before,” he continues. Brighter colors come from the merchandise.

Also crucial to the concept, site-specific installations create “surprise, mystery, and intrigue,” Yabu says. Scores of white polycarbonate flowers dangle from the ceiling of the circular main foyer, echoing the art nouveau floral pattern in the floor’s mosaic while adding a playful note to the formality of this entry point. Suspended from the top of the atrium are dozens of winglike stainless-steel sculptures. Abstract birds in flight, they reinforce the impression of airiness and, seen from the basement, “draw the eye up,” he adds. Conversely, an installation of stainless-steel ribbons, flowing above an esca­lator to the basement, invites the customer down.

The levels are hierarchical, Pushelberg notes: “good, better, and best” from bottom to top. Handbags, costume jewelry, and eyewear from such relatively affordable labels as Longchamp and Miu Miu are sold in the basement—also home to a salad-and-sandwich bar and a Russian-themed tea salon, situated next to the atrium to be enticingly visible from above. The ground level offers a galaxy of top brands including Chanel, Christian Dior, Louis Vuitton, and Lanvin. And the second story is reserved for fine jewelers and watchmakers, among them Bulgari, Cartier, Van Cleef & Arpels, Rolex, and Tiffany & Co. “Working with multiple luxury brands under one roof was a challenge,” Yabu says. “They can be a bit like unruly children, each one clamoring for more attention­. You have to nurture them and instill some discipline in order for everyone to shine, as a family, in one home.”