Since starting out as a mechanical contractor a half century ago, McKinstry has evolved into an integrated enterprise offering construction, energy, and facility-delivery services. Headquarters is a campus not far from the small Seattle airport where the Boeing Company tests 737s. When employees needed a garage, eyes turned to an underused warehouse ripe for demolition. McKinstry first replaced the warehouse with a tilt-up concrete structure, a hybrid with two levels of parking topped by raw office space. Then the vice president of marketing and business development, licensed architect Tony Stewart, called up his former employer, NBBJ, where his friend Brent Rogers is a design principal. 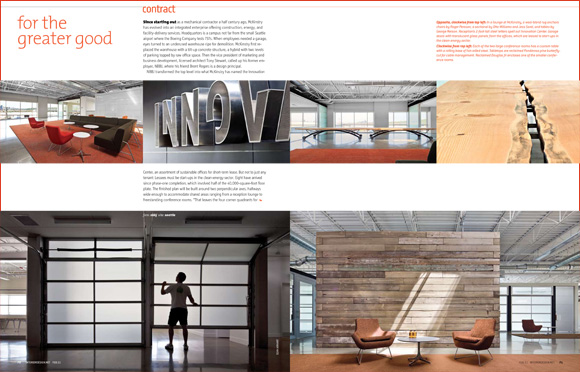 NBBJ transformed the top level into what McKinstry has named the Innovation Center, an assortment of sustainable offices for short-term lease. But not to just any tenant: Lessees must be start-ups in the clean-energy sector. Eight have arrived since phase-one completion, which involved half of the 40,000-square-foot floor plate. The finished plan will be built around two perpendicular axes, hallways wide enough to accommodate shared areas ranging from a reception lounge to freestanding conference rooms. “That leaves the four corner quadrants for individual offices,” Rogers explains. They’re essentially steel-framed boxes behind garage doors. Some are as large as 400 square feet, and all are easily divisible with metal studs and drywall.

Smaller conference rooms are enclosed in wood from the demolished warehouse. Tables in the two larger conference rooms have tops made from a fallen Ponderosa pine-found on a central Washington ranch owned by McKinstry’s CEO-and set on custom steel rolling bases. With woodwork and metalwork shops on-site, the client was also a partner. NBBJ designed; McKinstry built.