When the curtain rose on the Metropolitan Opera’s first-ever production of Attila, Giuseppe Verdi’s patriotic fantasy about the Huns invading Italy, expectations ran dizzyingly high, not least because the costumes were by Miuccia Prada and the scenery by Jacques Herzog and Pierre de Meuron. A round of applause greeted the opening set, depicting the barbarian-sacked city of Aquileia. It was stupendous. “Attila describes a moment in history when an old world is collapsing, and something new is rising out of the rubble,” Herzog says. “We took Verdi’s vision of destruction even more literally than he probably did.” 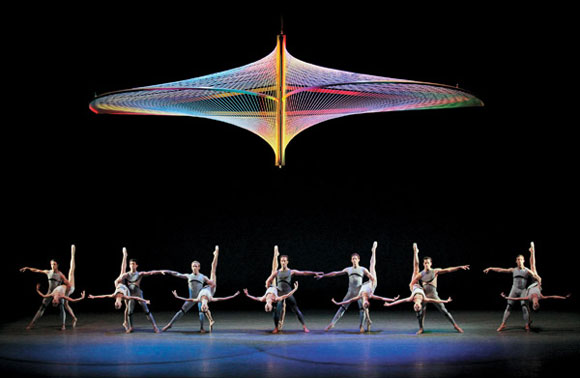 Filling the immense stage was a hyper­realist mountain of what appeared to be smashed concrete slabs and twisted rebar, brilliantly evoking urban devastation both man-made and natural. For an audience with New York real-estate savvy, there was an additional frisson: The ruins read irresistibly as an allusion to Herzog & de Meuron‘s spectacular TriBeCa apartment tower, a recession-stalled project almost certain never to be completed. 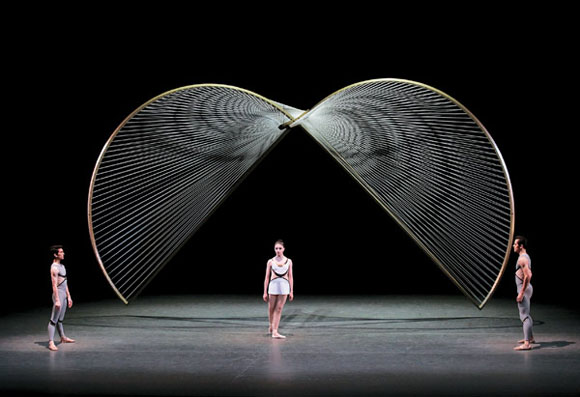 The opera’s second set, Verdi’s prescribed “forest,” was a proscenium-filling plant wall. As lush and impenetrable as a jungle, the vegetation pressed up close to the front of the stage, leaving only a narrow apron for the principals and chorus. On occasion, this vertical rain forest rose slightly to allow some of the action to take place as if on a dimly lit, low-ceilinged subway platform. Other scenes played out on ledges or in oculi high amid the foliage. As the performance moved up and down, the effect was disconcertingly like a Brobdingnagian ant farm.

Any designer working on the Met’s stage must come to terms with its vastness. Herzog and De Meuron’s strategies proved surprisingly close to those of Franco Zeffi­relli, a trained architect, in his elaborately detailed, flamboyantly overscale production of La Bohème. This performer-dwarfing staging, revived three nights before Attila premiered, has come to epitomize the “old” Met, the one that general manager Peter Gelb has sought to revolutionize through mold-breaking collaborations with artists from other disciplines. 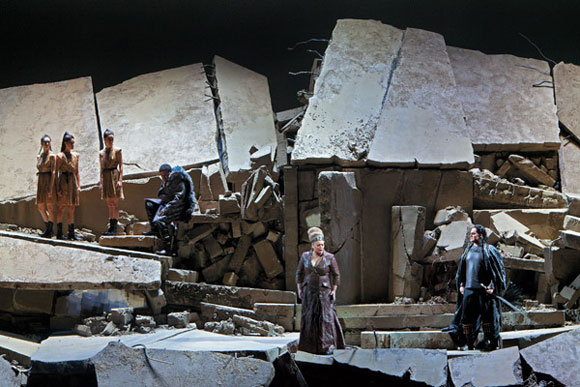 Architects have been designing sets and buildings for the stage at least since Andrea Pall­adio’s Teatro Olimpico opened in Vicenza, Italy, in 1585. In 1981, Philip Johnson and John Burgee devised an ingeniously transformable modular set for New York City Ballet’s Tchaikovsky Festival. Philip Johnson Associates had previously collaborated on the New York State Theater, the company’s home base.

Johnson, Herzog, and De Meuron have all won the Pritzker Architecture Prize, and their fellow winners Frank Gehry, Zaha Hadid, and Daniel Libeskind have made operatic debuts in the past decade. Libeskind not only designed the sets, costumes, and lighting for Olivier Messiaen’s St. Francis of Assisi but also directed it. Still, it was extraordinary when, only two months after the Met’s Attila, City Ballet mounted the Architecture of Dance: New Choreography and Music Festival with scenography by Santiago Calatrava. In a further coincidence, the plug had also been pulled on Calatrava’s headline-grabbing apartment tower in the financial district.

For the festival’s new productions, ballet master in chief Peter Martins says he asked Calatrava to emulate Johnson and Burgee with “some sort of scenic element that could transform itself in different ways for different choreographers.” Calatrava is no balletomane and had never designed for the stage. He is, however, a sculptor and a painter, and he modified Martins’s single-unit concept somewhat. 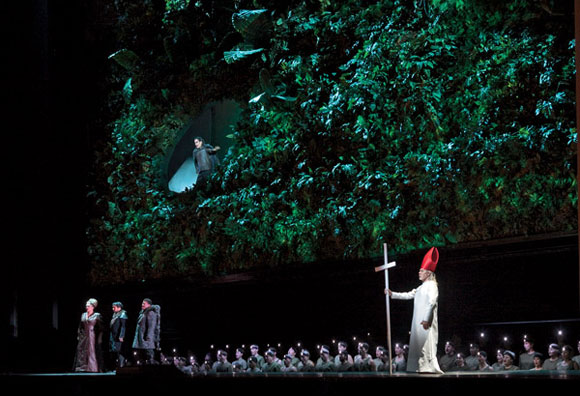 Two of the choreographers, Melissa Barak and Christopher Wheeldon, asked for painted backdrops depicting palm trees and the pampas, respectively. Mauro Bigonzetti got a suspended sculpture, an expanding and contracting mechanism comprising nine sunlike disks. Martins and Benjamin Millepied each received an architectural set of his own. Both of the latter strongly recall Calatrava’s celebrated bridges, fine-boned structures glistening white against dramatic landscapes.

Millepied’s comprised a graceful pair of parabolic arches with a harplike fan of tubing strung between. As the dancers moved around the structure, the tubing trembled gently, creating beautiful moiré effects, but there seemed to be little other relationship between the set and the choreography-something Millepied obliquely acknowledged in the program booklet, where he says, “It’s a large sculpture that sits on the stage, so I had to incorporate it.”

Perhaps because Martins initiated the project and presumably had closer contact with the design process than the other choreographers, he got the festival’s most distinctive architectural element, an articulated “space frame” shaped like a fortune cookie and strung with quivering cords. He was also able to integrate it convincingly into his plotless ballet, Mirage, set to a superb new violin concerto by Esa-Pekka Salonen. Calatrava’s marvelously ethereal construction opened or closed, rose or fell, rotated or tilted in response to the concerto’s four movements, giving each musical and choreographic section a distinct mood. As Martins says, “Passages in the score lend themselves to stillness and absence-for the architecture to take over and move.”