When Allen Klein, the legendary manager of rock bands from the Beatles to the Rolling Stones, bequeathed ABKCO Music & Records to his son, Jody, the younger Klein inherited more than just an independent record label, music publisher, and film and video production company. He also got a New York office as dated as Pat Boone. 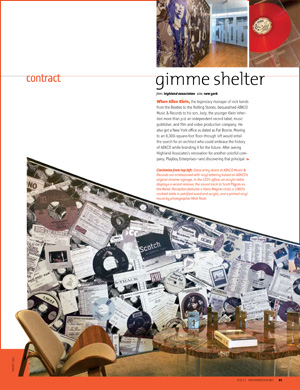 Moving to an 8,300-square-foot floor-through loft would entail the search for an architect who could embrace the history of ABKCO while branding it for the future. After seeing Highland Associates’s renovation for another colorful company, Playboy Enterprises—and discovering that principal Glenn Leitch is “the world’s biggest Iggy Pop fan”—Klein signed on.

“Great projects take clients who trust you to go on an architectural journey with them,” Leitch says. That journey begins in reception, where a groovy table topped in petrified wood and a chandelier made from retrofitted microphones appear against a collage-style mural of rock-and-roll memorabilia. In the lounge, stainless-steel display walls frame gold and platinum records. The open office’s CD wall shows off the cornerstone of ABKCO’s business: the Stones’s greatest-hits collection Hot Rocks.

The music references notwithstanding, Leitch never forgot the practical aspects. He made sure, for example, that the internal office area benefited from the main window wall by fronting perimeter offices with low-iron glass. And the natural light is bolstered by fluorescents cleverly concealed in a continuous cove.

“As an arts company, when we believe in talent, we let the talent do what they’re supposed to do,” Klein says. His one complaint about Leitch: “He’s too skinny!” The architect’s quick reply: “Like a rock star.”