Back in the day, in this case the 1980’s, jeans were, well, just jeans. The fancy-schmancy phrase “premium denim” had not yet entered fashion parlance. Price tags hovering at $300 were unthinkable. Nevertheless, Guess, launching in 1981, distinguished itself from the get-go. Who can deny the brand’s sex-appeal-by-association, achieved via ads featuring Claudia Schiffer, Anna Nicole Smith, and Carla Bruni? Those Marciano brothers’ campaigns are etched in our cultural consciousness. 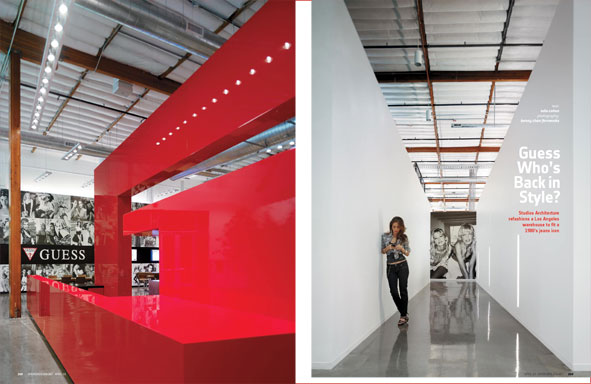 Almost three decades later, Guess is a public company producing full-spectrum fashion: women’s shoes, bags, and dressy dresses, men’s jackets and watches, kids’ denim. You name it. There are 1,200 stores worldwide, many of them company-owned, not franchised. However, command central is still Los Angeles, just south of downtown on a four-warehouse campus once owned by Howard Hughes.

Studios Architecture arrived on the scene as part of a design-build consortium competing to transform one of the warehouses into a design headquarters for Guess. But principal Chris Mitchell ultimately said no deal. “What you need,” he told his potential clients, “is something bespoke, sur mesure , not a project built by a contractor.” This was on a Friday. “OK. Show us what you’ve got on Monday,” the president and COO responded. Maurice and Paul Marciano, chairman of the board and CEO, respectively, would be on hand for the crit.

Over the weekend, Chris Mitchell and his wife, associate principal Sandra Mitchell, ditched a preliminary plan that Guess had drawn up. Out went a maze of rooms and doorways. In came two large ground-level studios for design and development, plus five conference rooms 12 feet up in the air: glass boxes set on the tops of drywall-enclosed service areas. These “tree houses,” as Chris Mitchell calls them, were what sealed the deal for Studios. They not only give each Guess division its own meeting space but also take advantage of the warehouse’s 30-foot ceiling height.

The project was completed in 14 weeks for just over $90 per square foot, excluding the kitchen but including all mechanical, electrical, and plumbing costs. Fine-tuning the program, the Mitchells designed a combination workplace and showplace to dazzle vendors and personnel alike. The open front-of-house area encompasses a full-service Wolfgang Puck—operated café, a lounge overlooked by an Andy Warhol-esque silk-screen portrait of Schiffer, and a reception desk shaped like a massive capital letter G, lacquered Guess red. Starting in reception, a black-and-white photomontage of Guess ads over the years wraps around the café. For a double whammy, turn around to see the images reflected and fragmented by the canted mirrored squares of a partition. “It puts the passerby on the runway or the stage,” Sandra Mitchell says. Seemingly complex, the piece’s design and construction couldn’t be simpler, with identical modules rotated 90 degrees inside an ink-black frame.

Taking up two thirds of the 78,500 square feet, work space proper stretches almost 250 feet long. Circulation was therefore a challenge. To improve flow, the Mitchells ran a corridor nearly the entire length of the building. This main thoroughfare is lined by meeting rooms and service areas and overlooked by the conference rooms. Staircases to the conference rooms rise perpendicular to the corridor. Down the middle run in-ground planters for stands of living bamboo. “The ‘bamboo way’ introduces a natural element in what is otherwise a concrete jungle,” Chris Mitchell explains.

The design studio got plenty of tackable wall area as well as worktables with zebrawood-laminate tops. The development studio represents the first U.S. installation of Korb + Korb’s Sense desking system, easily assembled by snapping, twisting, and locking, no tools needed. Both studios have rows and rows of modular wall systems with hang bars, drawers, and shelves for any conceivable type of sample.

When the clothes are ready for district managers and global partners to see, four times a year, fashion shows take place in the 1,000-person-capacity multipurpose room. Studios earned major points for providing this money-saving home-base venue—previously, the company staged its shows at pricey L.A. hotels. At the open end of the multipurpose room are black concrete bleachers. On the black wall behind them, neon script spells out a sentence: “The world is our field.” As Paul Marciano explains it, “That’s my take on global opportunity. It’s my handwriting, too.” The bleachers themselves are lined with seating pads made with crocodile- and python-patterned vinyl, remnants from Guess handbag collections.