Head Out on The Highway: A Groovy Service Station Outside Madrid

Despite its location on the arid Spanish plain—21 miles outside Madrid on the A-1, one of six major highways radiating from the capital—this Repsol service station looks like it could be a locale from American Graffiti. And just as that movie classic put George Lucas, Richard Dreyfuss, and Harrison Ford on the Hollywood map, these soaring canopies by Moneo Brock Studio have turned the sleepy town of San Agustín del Guadalix into an architecture-world destination. 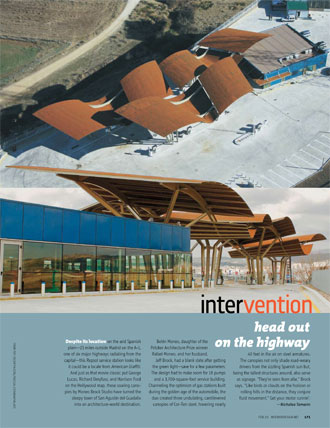 Belén Moneo, daughter of the Pritzker Architecture Prize winner Rafael Moneo, and her husband, Jeff Brock, had a blank slate after getting the green light—save for a few parameters: The design had to make room for 18 pumps and a 3,700-square-foot service building. Channeling the optimism of gas stations built during the golden age of the automobile, the duo created three undulating, cantilevered canopies of Cor-Ten steel, hovering nearly 40 feet in the air on steel armatures. The canopies not only shade road-weary drivers from the sizzling Spanish sun but, being the tallest structures around, also serve as signage. “They’re seen from afar,” Brock says. “Like birds or clouds on the horizon or rolling hills in the distance, they conjure fluid movement.” Get your motor runnin’.