Seoul’s 63 Building was proclaimed South Korea’s tallest when it topped out at an impressive 817 feet in 1985. Subsequently forced to surrender that crown, the development maintains its status as a national symbol of the economic boom that followed the Korean War. The structure includes an IMAX theater, an aquarium, and even a wax museum in addition to offices and 80,000 square feet of event space officially known as the 63 Center. 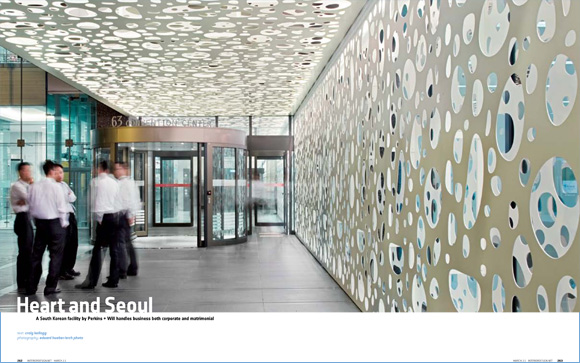 “It may have been built in the 1980’s, but its heart was in the ’70’s,” Perkins + Will principal Joan Blumenfeld recalls of the decor. While acceptable for business meetings, the corporate vibe was all wrong for a key demographic, young brides looking for a place to hold ceremonies and receptions. “Weddings are a big business in South Korea,” senior associate Lawrence Kim adds. A native speaker of Korean, Kim was invaluable not only for his professional skills but also as a cultural liaison, coordinating with local designers and contractors for Perkins + Will’s radical restyling—with a budget to match. “We came up with suggestions we thought were going to be too expensive, and the owners thought they were great ideas,” Blumenfeld marvels.

To tour comparable venues, mostly ornate ballrooms in five-star hotels, she and Kim traveled from New York to Seoul. Following that adventure, they resolved to use earthy, natural themes instead. Existing floors of slick white marble were high on the hit list. Replacement tile is brownish-gray porcelain that resembles slate. Labor-intensive custom elements were made in China. For the central atrium that connects all four levels, one manufacturer built vast aluminum wall grids to hold acrylic bud vases. The idea started as a way to display seasonal flowers, but the owners balked at the sheer numbers: There are more than 30,000 tiny vases in the finished installation. Ultimately, another company supplied hyperrealistic artificial roses in yellow, orange, and red.

The event rooms formerly shared the podium base of the 63 Building with a bank branch and a traditional Korean restaurant. To avoid the distraction of strangers in shorts and T-shirts mixing with formally dressed wedding guests, Blumenfeld and Kim suggested moving the bank and turning the restaurant and its broad terrace into another rental space. They also replaced the terrace’s concrete parapet with clear glass, so seated diners can enjoy the view of the Han River.

To reach all seven event rooms, the most dramatic route is via the atrium’s escalators. They’re partially screened from the surrounding lobbies by runs of double-layered panels perforated with a water-droplet pattern, smaller on the outer layer and larger on the one facing the atrium, to better echo its multistory scale. To test the opacity of the overlapping perforations, the team in New York used foam-core board for a full-size mock-up. The final verson is white-painted aluminum sandwiching LED strips mounted at the top and bottom. Depending on the occasion, the cutouts glow with one of several preset colors: warm white for weddings, blue for concerts, etc. Blumenfeld and Kim were so pleased with the result that they made the illuminated panels the project’s signature by using them to build ceremonial canopies for the curbside drop-offs.

Such theatrical gestures are central to the culture of contemporary Korean weddings. In the event spaces, dedicated ceiling fixtures light the “virgin road” that the bride walks down. The biggest space, which seats more than 1,200 at round tables, also comes with a pair of preparation rooms for wedding-party use. In both these rooms, the plush carpet is as close to white as Blumenfeld and Kim could choose, in good faith, for a high-traffic area. A forest metaphor defines the groom’s room, where wall panels are wood and translucent ceiling panels are emblazoned with a magnified tree-branch pattern. Meanwhile, the bride’s room has a heavenly motif. Glass paneling is back-painted sky blue, and frosted-acrylic tubes, massed on the ceiling, create a cloud. People already seem to love the room so much that, ironically, it’s become a mandatory stop for every bridezilla touring the facility-even when an actual bride is inside with her family, trying to primp for the most important day of her life.