Life on the streets isn’t pretty, and the transition from a shelter to an apartment can be almost as rough. That’s less so, however, for those who make it to the subsidized Osage Villas in an area bordering South Central Los Angeles. 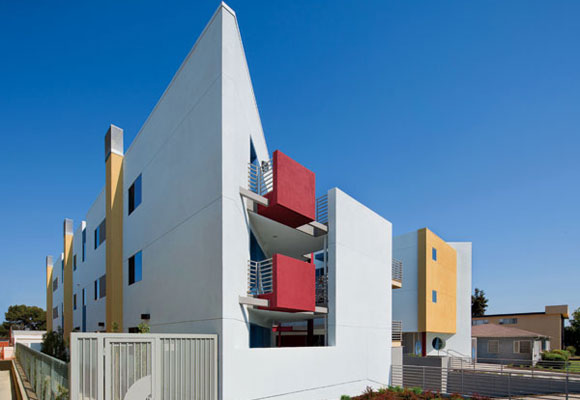 The nonprofit PATH, which stands for People Assisting the Homeless, commissioned Jeffrey M. Kalban & Associates, which had designed PATH’s L.A. headquarters, to construct the building. It’s three stories, divided into apartments with one, two, or three bedrooms and square footage ranging from 500 to 1,000. Working hard to break the institutional mold, Jeffrey M. Kalban configured all 20 units to open onto a central courtyard, which functions as an outdoor living room. A turf-covered segment is a playground for kids. Adults can sit on the concrete benches built into the sides of raised planting beds. “Residents benefit from a shared space that both looks good and facilitates social interaction,” Kalban comments. “Courtyard housing also offers security, in that ‘eyes’ are watching at all times.” Including from the bridges crossing the courtyard on the diagonal to connect the walkways that provide access to each apartment. These substitutes for interior corridors terminate at mini balconies painted red-the architect color-blocks as skillfully as any couturier.

“A local councilman called it the best building in the city,” Kalban says. PATH must agree. The nonprofit has already signed him on for a third project. This time, it’s senior housing that will include a branch library and retail.