In 2005, Frenchman Emil Humbert was fresh out of Ecole Nationale Supérieure d’Architecture Paris-Belleville and living in Monaco, designing, under his namesake firm, what would be the first of several Beefbar restaurants. But, being young and green, he felt it would be more productive and interesting if he wasn’t working alone. When a decorator friend introduced him to Monegasque Christophe Poyet, who’d just earned his interior architecture degree from Académie Charpentier, the two jumped at the chance to collaborate, establishing Humbert & Poyet in 2008. “In the creative process, it’s great to have someone who’s your equal next to you,” Humbert, now 38, says.

Their first joint venture, a Monaco apartment, was a smash. Today, with multiple residences, as well as another Beefbar in Paris and an Aquazzura shop in New York, their first stateside project, under their belt, Humbert & Poyet is 20-strong with a main office in Monaco, a satellite in Paris, and high-end commercial and residential com­missions all over the map, including in Mexico City and Hong Kong.

Humbert and Poyet have designed ground-up houses but prefer focusing on interiors, often entering projects when the shell is done but the inside is still raw. There’s nothing raw about their completed work, however, which 36-year-old Poyet describes as “like a movie set, the perfect environment for the perfect place for one particular moment that makes people feel beautiful and good about themselves.” Although their commercial projects tilt toward the glamorous, Humbert and Poyet love combining the rough with the refined in their residences.

That contrast can be seen in a recent home, a three-story ski chalet in the Swiss Alps. The architects situated the public spaces on the top floor, to take best advantage of the mountain views, and paneled nearly the entire 7,000-square-foot interior in rustic reclaimed barnwood. But then luxe slabs of veined marble appoint bathrooms and even the mudroom, where ski gear is stowed. Further, upholstery materials include cashmere and royal-blue velvet, shower fittings have an antique gold finish, and alabaster light fixtures are everywhere. The latter are among the house’s myriad custom pieces. Artisan-made creations feature prominently in all the firm’s projects, and it just launched a limited-edition lighting and furniture line last year.

Word of Humbert & Poyet’s talent is spreading fast. In process now are the interiors of a 19-story apartment tower in Monaco. Two tenants admire the public spaces so much they’ve already hired the firm to furnish their apartments.

Christophe Poyet & Emil Humbert: A few of their favorite things 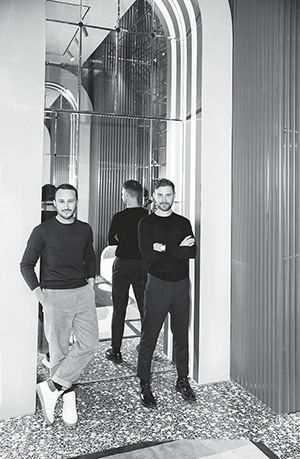 Paris restaurant: Anahi for its incredible Argentine meat and rich history—it was the fashionista place to be in the 1990’s.

Monaco restaurant: Song Qi is like having dinner in a jewelry box.
(Full disclosure: We designed it!)

Furniture designer: Gio Ponti,
a humanist and a genius who had a unique, joyful vision of the world.

> See more from the January 2019 issue of Interior Design