The Oklahoma City campus of the Chesapeake Energy Corporation is certainly a place that Rand Elliott knows well. Over the past 21 years, Elliott + Associates Architects has completed both architecture and interiors for more than 150 projects in 13 buildings on the 30-acre site: a garage, a boathouse, a fitness center, auditoriums, and exhibition spaces, just for starters. His fourth Chesapeake Energy restaurant, Elements, is the most recent phase. And he’d given each of the previous three restaurants its own design and food concept. Wild Cat, featuring “rustic surfaces and home cooking,” he says, shares a kitchen with the glassed-in Conservatory, which has a menu heavy on comfort food. A haven for pizza fans, Fuel, taps into the high-energy culture of the open kitchen. So what could be left for Elements? 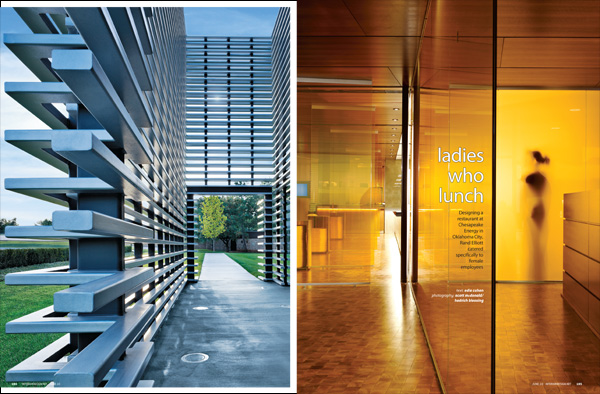 Food-wise, Elliott took inspiration from the designated site, a satellite location a short drive from the main campus. The two six-story office buildings there are pop­ulated by the mostly female, highly health-conscious accounting department, so a salad-centric spa menu was clearly it. But there would also be a deli station and grilled fare to lure diners from the rest of the campus, per client mandate. As for the design, it was driven by another concern of Chesapeake Energy’s chairman. “He likes the idea of providing restaurants as cool as any in the community,” Elliott says. That meant anything goes. Anything but a corporate cafeteria.

An Interior Design Hall of Fame member, Elliott is particularly masterful with light. He paints with it. He makes interiors glow and transforms exteriors into studies of light and shadow. That he was able to reinvent a drab 1980’s building as one of his characteristically striking compositions, inside and out, is a testimony to both his skill and his eco-sensitivity. “The building was ugly, like thousands all over the country,” he says. “But you can’t ignore this building stock. You can either tear them down or renovate them. It would’ve been easy to tear this one down, but renovation is the highest level of responsibility.”

Boring and brown, the building was in dire need of rebranding. Simple paint for the outside was the first step: charcoal gray for all horizontals except a bronze-toned band at the bottom. But the architecture still needed oomph. Since the restaurant’s dining area is on a corner, Elliott wrapped it in louvered steel screens. “They add texture and humanity to a scaleless building,” he notes. Multitasking, the screens create a 10-foot-wide interstitial space for outdoor dining and shade it from harsh southwestern sunlight. He used similar louvers to build a freestanding tower that identifies the new entry, on the opposite side of the building. Voilà, a procession with mega-presence.

Inside, Elliott inherited a 10,000-square-foot, split-level situation that would actually prove perfect for a self-service setup. The upper level, with a ceiling just a little more than 8 feet high, encompasses the entry, serving stations, and kitchen. A few wide steps down, the space opens up to a 35-foot-high volume, the 150-seat dining area.

To make the upper level friendlier, he relied on a pair of materials. One is oak: rift-cut white oak for the ceiling and end-block red oak for flooring. The other, laminated glass, glows with a sunny yellow while serving several purposes. Seen from the entry, a partition to the left separates the restaurant from a conference room and the office lobby. To the right, a panel forms a translucent scrim between the entry and the kitchen-giving diners some back-of-house buzz.

When it’s time to eat, further panels perpendicular to the serving counter help people line up according to their choices: salads in one spot, sandwiches in another. No cafeteria-tray setup, by the way, this smart piece of rift-cut white oak and stainless steel is accompanied by techno-cool touch-screen monitors where patrons enter orders. When the food’s ready, names pop up, opposite, on monitors built into walls detailed with horizontal bands of the same wood.

The steps and a curved ramp allow for grand entrances into the sunken dining area, which, considering its scale, puts Elements on equal footing with any of Oklahoma City’s best restaurants. Louvers, tabletops, and low partitions are again of the pervasive white oak. Twinkle, in the meantime, comes from varying lengths of fiber-optic filaments suspended from the ceiling. A poet by avocation, Elliott calls them “fireflies.”