Major in Majorca: An Island Getaway With Urban Flair

From the second-floor terrace of this house on the Spanish island of Majorca, it’s clear that this is no typical Mediterranean villa. A connected volume swells up from the earth on one side, a skeletal staircase curls down to a swimming pool on the other, and parts of the exterior are literally awash in graffiti. With contributions from Tec Design, Marcel Wanders Studio, and a handful of street artists, this resort retreat stands way, way apart from its neighbors. 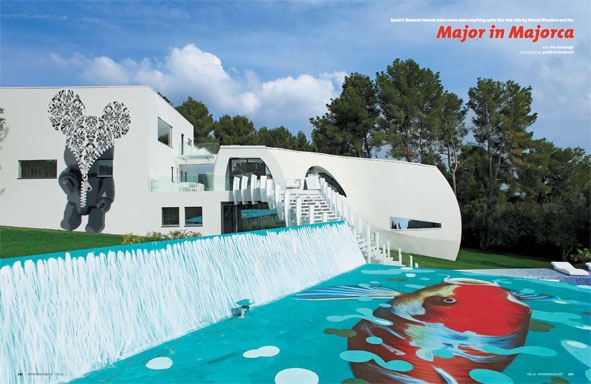 It wasn’t always that way. When a Berlin real-estate developer and his wife bought the house for themselves and their two teenage children, it was a traditional pastiche built in the ’60’s at half the current size. “It was like the dream of a 15th-century Majorcan finca, only a little bit wrong,” Tec CEO Sebastian Knorr recalls. Instructions to the architect were clear: Transform it into a vacation getaway unlike anything anyone has ever seen. So Tec stripped the house down to its frame, rebuilt it in white-painted concrete, and expanded the total square footage to 8,500 by adding a wing shaped like a banana, vaguely recalling the optimistic lines of Eero Saarinen.

According to Knorr, the addition is as much about framing the outdoors as about creating new living spaces. “When you have a house in Majorca, you’re outside 50 percent of the time. The garden really becomes part of the architecture,” he says, pointing out how the addition curves around an enlarged swimming pool and ipe deck, both gently rounded. “When you’re out there, it feels like somebody is spreading their arms out and embracing you,” he continues. “It’s intimate but still open to the view.”

To design the interior, Knorr suggested bringing in the exuberant trickster Marcel Wanders. “I thought he was just wild enough for this kind of project,” Knorr adds. Although Wanders had designed countless products as well as hotels and shops, he’d taken on few private residences. “It’s not something I want to do so many of in my life,” he admits. However, he says he was encouraged by the clients’ desire for a house that would be totally alien for Majorca: “These are people who really appreciate creativity and are really open to crazy ideas.”

Just how crazy Wanders decided to get is apparent as soon as you step through the door and encounter his cartoonish white resin tree sculpture sprouting from the slate floor tiles. The tiles’ smoky gray, similar in color to the asphalt parking area right outside, is one of several intentional links between exterior and interior; another, overhead, is a circular skylight. “The foyer is the central square of the house,” he continues. From there, you can go upstairs or down in the original structure, which contains the spa, the gym, six bedrooms, and their en suite bathrooms, to which Wanders gave individual personalities in the form of oversize floral mosaics. Or you can cross into the banana, with its open-plan public spaces.

Wanders says that his primary challenge was to figure out how to work with the banana’s space-agey architecture without bowing down to it completely. One way was to transform an entire sweeping wall with a plaster treatment that has a contoured horizontal profile like a gargantuan crown molding. He then brought in his signature neo-baroque furniture, for example the Carved dining chairs and New Antiques tables.

The vast majority of furnishings are custom, including the heavily patterned carpet that covers not only the floor of the home theater, upstairs in the banana, but also the walls and the ceiling. Among the few exceptions are the dining area’s black crystal chandelier by Philippe Starck and the master suite’s charred chair by Maarten Baas and cactus-shape clothes stand by Guido Drocco and Franco Mello.

Still not quite unique enough? Those street artists, flown down specially from the U.K., added their own imaginative touches. C6, a multimedia collective, masterminded the Muhammad Ali mural between the entrances to the spa and the gym; the three-story-tall teddy bear emblazoned on one of the pristine white exterior walls; and the giant flaming-red or yellow koi images cavorting in the turquoise pond painted on the roof of the combined pool house and garage. Four other works, inside and out, are by Nick Walker, a sort of pre-Banksy graffiti avenger. The compound may be a secluded island outpost, but urban energy is definitely in the house.