Headed up by partners Gregor Hoheisel, Lars Krückeberg, Wolfram Putz, and Thomas Willemeit, Graft Gesellschaft Von Architekten is the design studio behind several prominent recently completed and upcoming projects in Berlin. Interior Design asked Putz for his input on the changes to the city’s urban landscape.

Interior Design: What is your firm currently working on in Berlin?

Wolfram Putz: We have tons of residential projects underway on all scales— from 250 apartments in a condo complex to Teltown, a collection of 93 row houses in the town of Teltow outside of Berlin. There’s also two high-end villas and apartment complexes that are conversions of former hospitals.

We also earned a commission from the City of Berlin to be the first office to think about what can be done with Tegel Airport after it is closed—to invent some sort of incubator design for an entire new city district that they want to develop there. The working title is Urban Tech Republic, where we expect a German version of San Jose, or Silicon Valley. It will not only be web based but tech based, with inventor start-up companies with more of a tech-invention background.

The Euro crisis is sending real estate investors to the safer European countries, so what we are seeing in Berlin is an explosion of the residential market.

ID: How do you hope these projects will add to the city?

WP: The row houses—some in the south towards Potsdam and some towards the east—are for what we call starter families, the people having their first kid, moving out of the city and wanting a little house with a little garden.

Our goal is to transform the typical row-house model into something better than what’s on the market right now. Like Frank Lloyd Wright, we dream of a house for every man—a small budget but smart architecture, with sustainability elements. We learned a lot from our New Orleans project in 2006, when we rebuilt an entire city district with Brad Pitt.

ID: Is there a trend architecture and design in Berlin is following at the moment?

WP: It’s quite conservative. We’re still very much ruled by the idea of reconstruction, even if they call it “critical reconstruction.” Buildings pop up left and right, but half a year later you kind of forget they are actually new because they blend in and pretend to look 100 years old. Legislation in the building permitting process guides this, and a lot of designs are scrutinized to become more historically analogous.

The exception is temporary projects like Platoon Kunsthalle Berlin, which we collaborated on, or a group-build type approach, where 20 people join together and finance a house or apartment building and everybody gets a place. In contrast to the music scene or the art scene in Berlin, architecture is a struggle between two parties: the official party and the creative party. 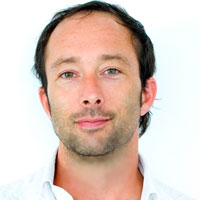 ID: Is there a Berlin project currently under development, in planning stage, or recently completed that you find particularly interesting?

WP: The cluster of developments around the former West Berlin center and the Berlin Zoologischer Garten train station—the Waldorf Astoria Berlin high rise project, for example, and the renovation and addition of the large development, Bikinihaus. These will bring bigger brands of operation into the city, and revitalize certain areas forgotten after the reunification.

Before the Wall came down, Berlin had two centers divided by the Tiergarten park—the West Berlin city center and the East Berlin city center—and the West was obviously the hip place in town for a long time between the two Germanys. Now it’s coming back up, so there’s a lot of buzz.

ID: Do you think these large-scale developments in West Berlin will be successful?

WP: There is definitely an audience. It’s not going to be the colorful, multi-ethnic, cosmopolitan creative place, but it is not the worst area to put these investments in. There are other areas in town and other audiences—students for example—that would really go for something else.

ID: What projects under development are the most talked about by Berliners?

WP: Over the last two years, the project that everybody is most concerned about, that takes the most public attention, although it is not really moving at the moment, is the Tempelhof Airport field.

It is now a huge park, but there is also going to be a new district around it. A lot of citizen initiatives want to claim certain areas for alternative models of living or urban farming projects. In terms of positive interest, although critical, this is obviously the dreamscape: an empty canvas. Our proposal for the area, Columbia Quarter, would allow these alternatives models of living.

Then there’s Berliner Stadtschloss, or Berlin’s royal palace, which is so crazy and will be so expensive. In terms of contradictions in our architecture field, we have fantastic, young creative avant-garde people in town, but the official policy is so backwards in terms of rebuilding old palaces verses finding crazy new ideas for cheap sustainable living in a diverse city. This is the love-hate relationship that we as architects have for this place.

However, the absolute winner, and it’s not a positive example, is the Brandenburg Airport scandal, because it is getting delayed, delayed, and delayed.

ID: What part of the city has a particularly intriguing trend of development at the moment? Where should people be moving and buying?

WP: For sure still in Neukoelln, further out towards Köpenick, and the Spree River. You also see a lot of people moving into Pankow, beyond Prenzlauer Berg, because once Tegel Airport is closed, flight corridors will close and suddenly unattractive real estate will become quiet, nice interesting districts. There’s also a lot of talk about Wedding. But it’s not like the newborn child that you don’t know the name of and I know it—it’s the usual suspects.

ID: With the development of the Spree and rising rents, some say that Berlin is rapidly becoming more commercialized and loosing some of the gritty soul that makes it so popular. Do you think this is true?

WP: I hope not. Obviously, as an architect, I have a two-take approach on this: Unless we all become revolutionaries and get rid of capitalism it is naive to think prime real estate will not be developed.

In every city in the world, waterfront and city center plots are considered attractive, and this desire will raise prices. We are not living in a dictatorship where legislation by city officials can totally forbid this process from happening. Yes you can slow it down, you can create rules that install diversity of rich and poor, rich and old. I am totally for this, but it is always a difficult path of compromise. It’s the law of nature and you just need to be smart by steering it, not blocking it.

Secondly I also think it’s a generational change problem. A lot of the people who came to Berlin after the reunification, the so-called urban nomads, were easily convinced to move from district to district to find the newest, hippest place, to pick up and leave when it became too expensive.

Suddenly a lot of these people are now of a generation not so interested in moving around. These early adopters of 10 years ago or 20 years ago have turned conservative, and want to protect their turf.

But we need that moving around group of people, because they are the pioneers. They are the people that discover these places. That’s the irony—those people that made Berlin such a gritty, always changing type of town are now part of the problem of not wanting it to change any more.