Why should only product designers design furniture for today’s market? Amaryllis Jacobs and Kwinten Lavigne, founders of Brussels-based design collective Maniera, believe two other disciplines are uniquely qualified. To make its limited edition series of tables, chairs, shelving, and room dividers, Maniera works with both local and international architects and artists. The result: a laboratory of creativity and signature pieces defined by unique, functional geometry. We asked Jacobs to explain her methodology.

Interior Design: What gave you the idea to collaborate with architects and artists versus designers to make your furniture?

Amaryllis Jacobs: Architects once felt the need to design furniture. Mies van der Rohe, Corbusier, Gerrit Rietveld—a lot of architects made iconic furniture because at that time there was the craftsman who made furniture but there was not yet the industrial designer. So architects were the first that made truly good furniture, new modern furniture. 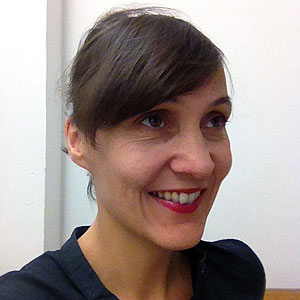 ID: You work with Office Kersten Geers David Van Severen (Office KGDVS). What drew you to them?

AJ: Their first utopian concepts were really great and interesting and their real projects turned out to be great. I have a strange hobby. I love to look at lectures on Youtube or on videos by architects because I love to hear them talk about the concept behind their buildings. Office KGDVS’s first series of projects were very mathematical and I really liked their way of wanting to repeat the same room in a rhythm of rooms—and their architecture is aesthetically very beautiful.

ID: Could you describe a few pieces you produced together with Office KGDVS? What were you looking for?

AJ: We left them completely free, we really didn’t want to interfere. Office KGDVS began with an existing table that they then bettered. It’s a very simple table with a slim profile and a very thin panel on top. They kind of evolved it because of our collaboration, and said, “Ok, a table is not a real table if the legs cannot come off.” So they came up with this solution to have the legs separate for flat packing. The system they used became a very beautiful detail of the table.

Also, the tabletop they first made was in steel. Steel is very cold and not very nice, say, to work on as a desk. They said, “We’d really like to cover it with leather, but it would be so dirty! It would be hard to use or keep the leather nice.” So they went searching for another kind of leather look and found an epoxy coating that is usually used for flooring. They poured it on top of the table so that it makes it a very warm piece. It’s a bit rounded, because when we put the coating on we had to walk around it for four hours to keep the drips away. They also very quickly decided to make the top in aluminum and polyester.

With an industrial engineer, they decided the dimensions of these three tables would be decided by the strength of the material. That is why the polyester table is much smaller than the very long and elegant steel table. We present the three tables together as a set, forming a 9-by-9-foot diagonal.

Then Office KGDVS said, “Ok, wouldn’t it be funny to design a totally different kind of chair?” They were very much attracted to a chair by Michael Thonet—the Austrian craftsman—called the Walking-Stick chair. It’s a small chair with a round seat which can be folded together. We copied the chair and then froze it. Our chair is not foldable, it’s more a little side table where you can put a glass or a computer. It has only three legs, so one of the legs now has a beautiful counterweight—it looks like a flamingo that puts its leg out, a game of balance.

ID: You also worked with architect Anne Holtrop. What did you do with him?

AJ: His work is totally different—all his buildings are very organic forms and he always starts from an idea that has nothing to do with architecture. For example, he made a beautiful temporary museum near Amsterdam, the Temporary Museum (Lake) based on a drawing he made influenced by a painter. He likes forms that can be interpreted by people in a very different way, [like Rorschach inkblot tests.]

[Holtrop] wanted to start his furniture off in the same way, so he began with a collection of stones he was really attracted to—these are very small stones like agate, jasper, and onyx. He found a book written by Roger Caillois—a French writer who was first a surrealist and then focused more on the power of ritual and other aspects of communal life—with lots of pictures of these small stones. . .Caillois wrote two books about what he [saw] in these stones.

[Holtrop] chose the stones he liked best, enlarged them, and then [selected] fragments to compose his furniture. So he made four shelves, one desk, and a mirror that is also a room divider—a very dramatic but beautiful piece. Every stone he used has a story. We were at a fair last week and everyone came up close, asking, “Eh? is this a real stone?” When you come closer you see that it is painted [in oil with] a lot of different layers so that it becomes a rocky material. . .He really liked the idea of them being very shiny.

ID: What’s up next for you?

AJ: We have two projects in the works. We are going outside of Belgium, with a new series in London, by 6a Architects, with Tom Emerson and Stephanie Macdonald, and we are now talking to a very good architecture firm from Belgium.

ID: How do you feel the design climate in Brussels influences you?

AJ: There’s a big contemporary art scene in Brussels, with lots of art galleries, but not that many design galleries. So with Maniera, it’s a new market to explore a little bit. We come from the contemporary art world and we try to convince the art collectors to also collect design—but it is a big challenge as there are only a handful of design collectors.