Marc Peridis is an interior designer and owner of a contemporary design gallery called 19 Greek Street in London’s Soho. He came to the city in 2006 from Montreal, Canada, and studied briefly at Central St Martins art school before freelancing and eventually founding his own design consultancy. Peridis launched 19 Greek Street in 2012 as a platform for experimental sustainable design and has hosted exhibitions by designers including Werner Aisslinger and Nina Tolstrup.

Interior Design: What attracted you to move to London and set up your business here?

Marc Peridis: I came here from Montreal because, although Canada’s a great place, it’s not really on the world scene, especially for design. I felt that if I wanted to further my career in design I needed to go somewhere where I could be part of the global conversation. 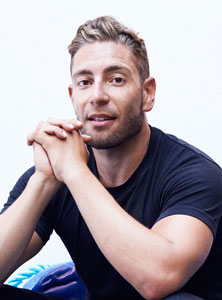 ID: How has the design industry in London changed since you arrived?

MP: There was a lot more business back then, but when the financial crisis hit it made everything a bit more difficult. I think it was good because suddenly you couldn’t just be a designer anymore, you had to be a really good designer to get work.

ID: What projects have you been working on recently?

MP: We’ve done a show apartment in a development called St Martins Lofts, which is a renovation of the famous old Central St Martins art school building. We’ve also designed interiors for two new private members’ clubs in Soho and we’re working towards a new collection that will be presented at the gallery during the London Design Festival.

ID: How do you choose the designers you represent at the gallery?

MP: People bring us things from all over the world and I began to gravitate to the ones who think in a sustainable way but without compromising on style. I started to find people who did things that looked great but were sustainable, experimental and pushed boundaries. At this point we have over 30 designers and we’re trying to focus on helping them develop their ideas.

ID: Which parts of the city do you think people should be looking to for interesting architecture and design at the moment?

MP: I like what’s happening in places like Hackney Wick and Peckham, with the emergence of pop-ups in more industrial spaces. We’re seeing more alternative ways of thinking about space, like houseboats, bar boats or warehouses that have become food markets. I like the raw nature of the approach to architecture and interior design that’s happening around London, especially in the east and south of the city.

ID: What sets London’s design scene apart from that of other global cities?

MP: I think what’s unique about London is that it’s a melting point for ideas from different cultures. The design industry has completely changed as a result of so many foreigners coming in; it helps to create new ideas and new ways of thinking, but at the same time it generates competition and keeps us all on our toes.