Twin sisters Salwa and Selma Mikou, after working respectively for Jean Nouvel and Renzo Piano, opened their own Mikou Design Studio in Paris in 2005. The Franco-Moroccan duo completed an educational double header on Paris’s outer rim last September. The Ecole Bobigny, a nursery and primary school, spirals around a closed courtyard with multicolor timber panels alternating with timber-framed windows. Not to mention, the Jean Lurçat High School nearby in the Paris suburbs follows the Polytechnical Campus near Lausanne, Switzerland; the Innovative Campus in Augsberg, Germany, and the House of Culture in Beirut, Lebanon. Among their current projects: the Feng Shui swimming pool in Paris suburb Issy-les-Moulineaux, with a rooftop garden and sundeck scatted with skylights.

Interior Design: What are your current projects around and about Paris?

We’re very happy to be starting on the Feng Shui swimming pool complex in Issy. It’s a very interesting building from a spatial point of view, with an interior ramp that extends out to the exterior to reach the rooftop solarium, which has large skylights scattered like “rugs” that illuminate the indoor pools below. We’re also very interested in urban design problems, and working on a project in Massy, another Paris suburb, where they are trying to renovate the town center, by creating a pedestrian zone with shops and duplex or triplex apartments. And in Clichy, just outside the Paris périphérique , we’re working on a project to open the town up to the Seine, giving it a new waterfront along the quays—it’s an urban plan with small sections of housing, shops and activities.

ID: Why have you chosen to concentrate on schools, housing and other public buildings?

We like working on sets of urban and sociological problems. Fairly often the public institutions we work on are located in difficult areas, where it’s essential to sew back together a frayed urban fabric, and reestablish a functional ensemble. Public buildings like schools and universities can serve as catalysts for restructuring the existing social fabric.

ID: Are you particularly focused on ecological questions?

Absolutely. The ecological question is central to our work, and we integrate it into our projects right from the start. It becomes an inherent factor in any architectural proposition we develop. For example, we’re about to complete a school in Saint Ouen with zero energy consumption, where we were determined from the start to capitalize on the use of indirect sunlight. The project is like a square standing on a point, turned toward the south, in graduated levels to optimize the sunshine. Big full-south courtyards have photovoltaic panels that provide the building with autonomous energy. 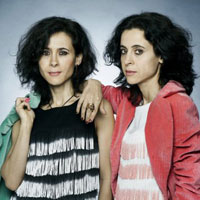 ID:  Are there particular problems working in Paris, both in terms of ecological considerations and in general?

Yes. The environmental constraints are very heavy, and force us to integrate them even into our preliminary planning. The thermic calculations and the HQE (High Quality Environmental) targets are more and more exigent.

ID:  What current projects in Paris do you find the most interesting?

We find it’s very exciting to give a new height level and a new horizon to Paris. The [proposed] towers would bring a new urban landscape, and above all erase the image of Paris as a “city as museum”. For us, the city must evolve and reinvent itself. In that respect, London is much less chilly to the idea of skyscrapers, and those buildings—well constructed— often can create a spatial reference and reorder new central focuses.

Paris is a remarkably agreeable city from an aesthetic point of view. It’s a city that has integrated the dimensions of beauty and hedonism. When you come back to Paris from a trip you are always astonished by the  harmony of the buildings, their relationship with the Seine, the Haussmanien composition that sets the buildings in perfect relationship to one another. Paris is a city with a very clear urban plan.

On the other hand, it has the defects of its virtues: a certain measure of rigidity and lack of reinvention. It’s a city that gives in a bit too much to its habits, and that presents few challenges in the sense that surprises are rare. We love Shoreditch, in London, for example; wandering in those streets is a happy discovery of improbable meetings, whether it’s with buildings, art galleries or new concept stores —a non-conventional urban attitude that isn’t found in Paris.