Having moved from France to Singapore in 2009 to work as a project coordinator and team leader for the National Gallery Singapore (formerly The National Art Gallery of Singapore), Yann Follain, director of architectural firm WY-TO’s Singapore office, admits that he took a big risk when he decided to start a new branch of the firm in Southeast Asia. Follain describes his move to Singapore as a learning experience that forced him to abandon the notion that architecture is exclusively about buildings and to expand into multidisciplinary projects and curatorial gigs. Now the risk is paying off: Follain and his business partner Pauline Gaudry opened WY-TO SARL in 2012 to strengthen their architectural practice in France and Singapore, securing a number of cultural and residential projects in Southeast Asia and firmly rooting WY-TO as a force to be reckoned with in the Singapore architecture and design scene. 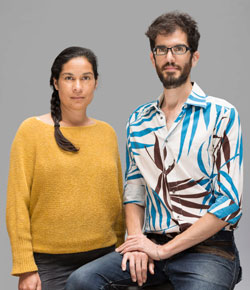 Interior Design: Why did you decide to start your practice in Singapore?

YF: Back in architecture school in France, I attended a workshop studying the globalization phenomenon and traveled to Hong Kong and Indonesia as part of the workshop. I eventually moved to Jakarta, Indonesia to further my studies and lived there for a year, before moving to Bandung, Indonesia, where I was analysing Indonesia during colonial and modern eras. When I returned to France, I began working for Colcol Franzen & Associ é s, eventually getting the opportunity to work on the National Gallery Singapore with Studio Milou, a French company that won the design competition for the project. Concurrently, I started my own practice with my business partner, Pauline Gaudry. First, we were working on projects in France and, when I moved to Singapore, I decided to open our firm’s second office here, while continuing working with Pauline.

ID: What challenges did you face when you started your firm in Singapore?

YF: I thought that it would be simple to start my own firm and I was sure it would be easy to get jobs in Singapore. However, I had quickly realised that I needed to prove myself first by working on something more fast-paced and smaller scale to show my abilities to secure new clients and bigger projects. This pushed me to go beyond whatever I knew, because I couldn’t do what I was used to doing, which was architecture. I had to look into other projects and explore other fields. The very first project that I did was an exhibition/display/art installation in a mall. I worked with cardboard as the main material and had set up and assembled the installation myself. Eventually, the manager of the shopping centre noticed my work and offered another installation commission to me and that, in turn, led to other, bigger projects. I had to forget about the notion of architecture for a while; I had to look outside at other disciplines.

ID: How do you choose which projects to go after now?

YF: I don’t have any specific goals in terms of projects; our firm is extremely diverse. After curating The Essential Eames exhibition, I’ve realised that my work process is actually similar to the approach taken by Charles and Ray Eames. They were furniture designers, but also moviemakers, exhibition designers, curators. Their creative process was very organic and not confined to just one discipline.  Our firm’s process is about contextualising our work, about small details that will tell you something about the client, about the culture and about the context of the space and place, not necessarily about the type of a project.

ID: Besides being an architect, you have taken on curatorial roles for some of the museum exhibitions that you have also designed. How did you get into the curatorial side of design?

YF: The first experience as an exhibition designer and an exhibition art director was for ArchiFest 2010. I did this event on a volunteer basis, as it was a non-profit event organized by the Singapore Institute of Architects. For the first year, the content was more or less established, but the following year I had to generate the content for the event, which was my first time working in a role of a curator. The first big exhibition that I did was the Andy Warhol exhibition at the ArtScience Museum. I was told, “We have 200+ artworks; do something with them.” We worked closely with the Andy Warhol Foundation to curate a narrative for the collection and to create a unique journey through the exhibition. The most extensive curatorial project thus far has been The Essential Eames exhibition, where we had to do all the research, establish the collection and narrative and present the curatorial approach to the museum and to Herman Miller.

ID: What do you think about the architecture and design scene in Singapore now as compared to when you first moved here?

YF: The situation has not changed that much. The architectural landscape is denser but the approach to architecture is the same as it was when I arrived here. Everything in Singapore needs to be a spectacle; architecture serves as urban décor and it took me a while to understand the logic behind that. However, I‘ve come to realize that the city is used as a backdrop, especially for national events like the Youth Olympic Games and the National Day Parade. When you are observing the various events, you see the Central Business District in the background, the spectacle of architecture, and you get the sense of ‘wow’, the sense of pride for the city.

Singapore is sometimes lacking that moment of intimacy and calm, putting much stress on the grandeur and the spectacle instead. Yes, I appreciate the architecture of Singapore because it’s changing the city for the better, but sometimes we should forget about the spectacle and think about what the city needs. It needs domestic architecture: things that are not loud and that are understated.

ID: There has been a big push for preservation of historic, colonial-era buildings in Singapore. What do you think of this trend?

YF: Singapore went through the normal process that all developing and developed countries go through. When you get your independence, you start with demolition to show that you now have the power to take history into your own hands. A lot of iconic colonial buildings were destroyed during that time in Singapore. A little after, there was a period of realization that historic buildings should be protected as much as possible as they are, without any intervention. The third stage of the process is the popularization of the adaptive reuse of buildings; a selective process of which features need to be kept in tact and which ones need to be modified. The National Gallery Singapore and the Victoria Theatre and Victoria Concert Hall are excellent examples of this.

I would say the next step would be to look at the contemporary, post-colonial buildings in Singapore, the ones that have been built by Singaporeans or foreigners that came to Singapore in the time of its independence. Pearl Bank Apartments, Golden Mile Complex are one-of-a-kind examples of the young history of the independent country but are often under the threat of demolition; they are iconic buildings that need to be recognized and protected.