Set on a swamp and veering from polar nights to sublime white nights, St. Petersburg’s uniqueness and battle with its own being is reflected in a perpetual struggle to define the boundaries of its architecture and design. 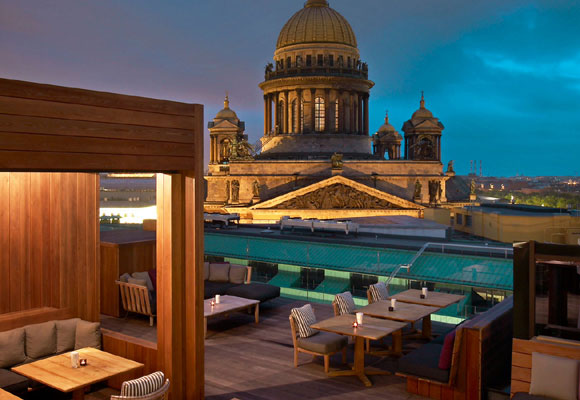 The city came into being in 1703 through the whim, determination and brute force of Peter the Great, who sought to reshape Russia by building a “window into Europe” of palaces and canals. Over 310 years later, the city has survived the rise and fall of the czars, the Bolshevik Revolution, starvation during a Nazi blockade, and three name changes spanning the twentieth century (from Petersburg to Petrograd to Leningrad to Petersburg). Russia’s tortured post-Soviet search for a new identity brought Leningrad native Vladimir Putin to power. The former KGB agent’s roots in the former tsarist capital might have inspired his approach to ruling Russia.

Is modern architecture needed or even possible here? Debates over the Mariinsky Theater’s new second stage and the Lakhta Center skyscraper project, shed light on what many in the city regard as an existential question (see more on this in New Builds and Insider’s Take with architect Sergei Tchoban). For the design conscious, the best way to confront the reveries into which this city plunges residents and visitors alike, is to head to miXup Terrace (open May-September) on the roof of the W St. Petersburg and stare at the dome of St. Isaac’s cathedral next door—it took French architect Auguste de Montferrand over 40 years (1816-1858) to build.