Founded in 2003 by architects Magorzata Kuciewicz, Krzysztof Banaszewski and Jakub Szczsny, and joined by Italian architect Simone De Iacobis in 2010, Centrala Designer’s Task Force has produced some of the most thought provoking and forward looking architecture and design not only in Warsaw, but in all of the EU. In 2012, Centrala made headlines when Keret House, designed by Szczsny in honor of the Israeli writer Etgar Keret, opened its doors to four kilometer-long lines of international visitors hoping to tour the “narrowest house in the world.” Here, Centrala’s Magorzata Kuciewicz and Simone De Iacobis talk about their design approach and how it plays an important role in the lives of Warsaw’s inhabitants.

Interior Design: Can you tell us a little bit about the history of Centrala, how and when you all came together as a task force, what the main mission of your collective is?

Magorzata Kuciewicz: Centrala is usually engaged in an attempt to shape reality critically, without descending into the commercial conformism paradigmatic for most architects. Only some of the tasks and issues we deal with are commissioned by specific ‘clients.’ Most often, they arise by themselves. Centrala’s collective was founded by Magorzata Kuciewicz, Krzysztof Banaszewski and Jakub Szczsny as a platform for architects and with the scope of participating in numerous public competitions. In the summer of 2010, Simone De Iacobis joined the group. Our approach to interior design is to archive highly individualized spaces. We’re often challenging our clients with radical solutions, always providing a backbone for them to build up their own fairy tale. That’s our essential approach when we’re dealing with renovations and with the arrangement of temporary exhibitions.

ID: What are some of Centrala’s current projects around Warsaw?

Simone De Iacobis: We’re currently working on one exhibition for the Museum of the History of Polish Jews, which will open in September this year. We’re now finalizing the arrangement of Martha Rosler’s exhibition that will be shown in the Center for Contemporary Art at Ujazdowski Castle until the middle of May. Centrala is also proudly the studio that has architectural custody of the Hansen’s House in Szumin. We also recently completed a survey of the building for the Warsaw’s Museum of Modern Art. 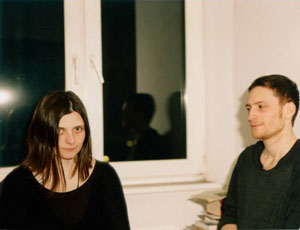 ID: Centrala does a mix of public and private projects. Do you have a preference for either? How is designing for either public or private spaces different in your experience?

MK: I can’t say we have any preference for either. In the private field, we’re looking for innovative solutions to rather traditional spatial programs, while in the public realm, we’re always trying to introduce new programs and non-obvious design functions. The discussion on the co-modification of public interiors and the possibility to create non-profit indoor spaces is always of a vital importance to us, like, for example, our project, the Urban Sports Square in Emilia Pavilion. We ponder how nontraditional and changeable functional systems can provoke unconventional behavior, as well as how nonpermanent spaces for events can function.

ID: You’ve said that Warsaw’s design and architectural history informs what you do. How so? What aspects of its history most attract you and why?

SDI: Many of our projects attempt to provoke public debate on the protection and revitalization of the legacy of the postwar modernist avant-garde. Actions, urban interventions, and publications are impetuses to re-examine reality, allowing us to view Warsaw as strong city for anecdote and experiment. We also want to re-examine the imagination of the structure of the capital. It is chaotic on the surface, but, in fact, it is composed of numerous systems with an interesting internal logic. Popularizing modernist bold visions (like experimental typologies, for example) and systematizing the knowledge of the city in which we live is the first major step toward a possibility of shaping it.

ID: What are some of the Centrala projects you are most proud of? Why?

MK: Any of our projects aimed at evoking reflection among the public about urban space, such as the whole Skwer.eu initiative; our rehabilitation of sensitive architectural heritage (for example, the revitalization of Warszawa Powile Pavilion) and the Hansen’s House in Szumin. Also, any of our ideas that can be illustrated with urban-scale diagrams, such as our design proposal for the main municipal concert hall, Sinfonia Varsovia.

ID: Centrala is involved in a number of educational initiatives. Which ones? How does education play a role in Centrala’s overall mission?

SDI: We’re often opening ourselves up to collaboration with experts and amateurs from outside the field of architecture and urban planning. Education for us is always a two-way street, where we’re sharing our experience, while receiving very different inputs from our various interlocutors. Workshops, lectures, and performances are among our favorite educational tools. For instance, we’re just about to present a performative lecture on the topic of Zofia Hansen’s theories together with dancers for the Bio-Formy Festival at the TR Warszawa.