Mention the Metropolitan Transportation Authority’s subway system, and uplifting interior spaces are not typically what comes to mind. Many residents are unaware that ornate decoration figured large when the first stations opened in 1904. The original planners, in the thrall of the City Beautiful movement, were furthermore concerned that “New Yorkers would not want to ride in a hole in the ground,” New York Transit Museum curator Carissa Amash says. Surface embellishment bore the considerable responsibility of encouraging them to do so, as the underground station architecture was strictly dictated by engineering requirements. 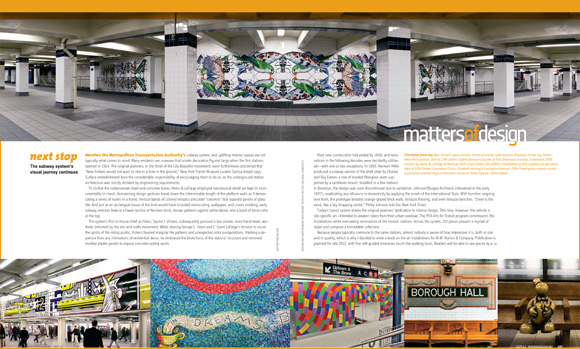 To civilize the subterranean steel-and-concrete boxes, Heins & LaFarge employed neoclassical detail yet kept its monumentality in check. Humanizing design gestures break down the interminable length of the platform walls as if demarcating a series of rooms in a home. Vertical bands of colored mosaics articulate “columns” that separate panels of glass tile. And just as an archetypal house of the time would have included wainscoting, wallpaper, and crown molding, early subway interiors feature a lower section of Norman brick, mosaic patterns against white above, and a band of terra-cotta at the top.

Most new construction had ended by 1940, and renovations in the following decades were decidedly utilitarian-with one or two exceptions. In 1969, Herman Miller produced a subway version of the shell chair by Charles and Ray Eames: a row of molded fiberglass seats supported by a cantilever mount. Installed in a few stations in Brooklyn, the design was soon discontinued due to vandalism. Johnson/Burgee Architects intervened in the early 1970’s, eradicating any allusions to domesticity by applying the tenets of the International Style. With function reigning over form, the prototype boasted orange-glazed brick walls, terrazzo flooring, and even terrazzo benches. “Cheer is the word, like a big shopping center,” Philip Johnson told the New York Times.

Today’s transit system shares the original planners’ dedication to interior design. This time, however, the vehicle is site-specific art—intended to awaken riders from their urban overload. The MTA Arts for Transit program commissions the installations while overseeing restorations of the historic stations. Across the system, 215 pieces present a myriad of styles and compose a formidable collection.

Because people typically commute to the same stations, almost nobody is aware of how impressive it is, both in size and in quality, which is why I decided to write a book on the art installations for W.W. Norton & Company. Publication is planned for late 2012, with five self-guided itineraries much like walking tours. Readers will be able to see pieces by a multitude of artists, including some of contemporary art’s biggest names. Roy Lichtenstein, using his famous comic-book style, illustrated past and future transit in his mural at the Times Square-42nd Street station, while Sol LeWitt’s vibrantly pulsating tile patterns animate 59th Street-Columbus Circle.

Some artists find inspiration in the very confines of subway architecture. Elizabeth Murray transformed a claustrophobia-inducing space at Lexington Avenue-59th Street by covering every inch of the four walls in dreamy images and colors. In Vito Acconci’s trompe l’oeil installation at 161st Street-Yankee Stadium, walls slip away to reveal the infrastructure beyond. Soon to come at Avenue J and Avenue M, Rita MacDonald will depict a span of classic white “subway” tile peeled back to reveal a riff on prototypical residential wallpaper, as if we really are in someone’s parlor after all.