A century ago, the Florida city of St. Petersburg elected to reserve its entire Tampa Bay waterfront for a public park dotted with cultural attractions. It was 80 years later that the Salvator Dalí Museum found itself occupying a nearby warehouse, and trustees decided that the collection’s 2,100 works by Salvador Dalí—the second-largest holding in the world—could benefit from better lighting, more space, and a water­front location with improved access to downtown. Once the city leased the land, HOK began work on a building that doubled square footage to 68,000. 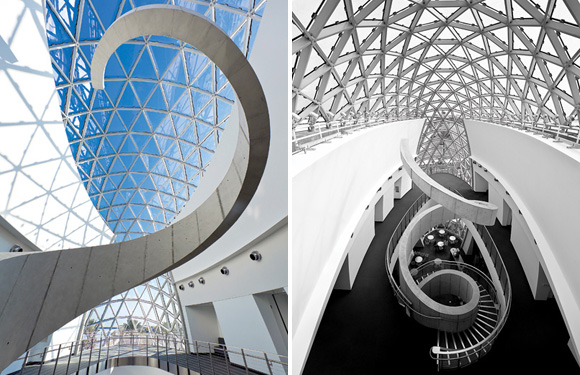 The architecture is carefully scaled to the site, opposite a concert hall, and the massing of the city overall, but the two faceted glass bulges that emerge from an otherwise straightforward concrete box are surprising and enigmatic. “That was our way of acknowledging that the museum is for the best-known surrealist-without falling into trite, kitsch, obvious clichés, like melting clocks everywhere,” HOK design director Yann Weymouth says. “I wasn’t sure what the public would really think of it.” He didn’t have long to wait. Shortly after the museum was unveiled, a single-day record of 2,200 people walked into the lobby and up the concrete spiral staircase that references Dalí’s fascination with the DNA double helix.