London’s members-only Soho House first claimed New York and Los Angeles as U.S. outposts. Now the burgeoning chain’s concept has hit the sand in Miami Beach, at a 1941 oceanfront hotel that had gradually lost its luster. Martin Brudnizki Design Studio re­invented the 16-story building as the Soho Beach House by paying homage to the deco-Cuban interplay of Miami gone by.

Past the lobby, with its restored terrazzo flooring, references to vintage Havana start out rustic at the bar, covered in Spanish encaustic tiles, but turn urban in the drawing room, where guests sip coffee, listen to the piano player, and glance at the artwork by Shepard Fairey. Creature comforts rule the screening room, filled with clubby sofas, and the library, paneled in hickory. To furnish the 44 standard guest rooms and six suites, Martin Brudnizki sourced antiques in the U.S., Latin America, and Europe. The rooftop pool overlooks the Atlantic Ocean, while the main pool adjoins a private beach. If you’ve eaten too much gnocchi Romana at the ground-level restaurant, Cecconi’s-a brand with the same owner as Soho House-it may be time for an afternoon at the upstairs Cowshed spa. 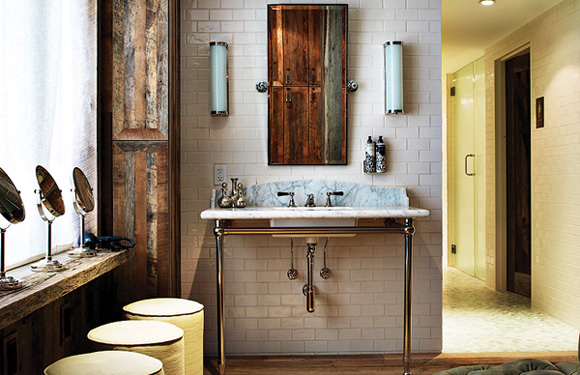