Something to Sink Your Teeth Into: GC Prostho Research Center and Gallery in Kasugai, Japan

Approached from the street in Kasugai, Japan, just outside Nagoya­, the GC Prostho research center and gallery is both familiar and alien. The facade, wrapped in a cubic latticework of aromatic, tactile Japanese cypress and red-tinged zelkova, seems enigmatic, even impenetrable­, when compared to the neighborhood’s traditional two-story houses. Nevertheless, the delicate forms conjure up pleasantly familiar­ associations-from jungle gyms to the intricately carved wooden brackets found on Japanese Buddhist temples. Curiously inviting, the building has great refinement and grace. 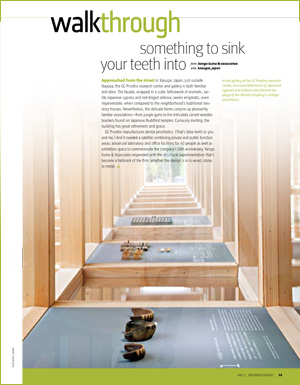 GC Prostho manufactures dental prosthetics. (That’s false teeth to you and me.) And it needed a satellite combining private and public function areas: advanced laboratory and office facilities for 40 people as well as exhibition space to commemorate the company’s 50th anniversary. Kengo Kuma & Associates responded with the structural experimentation that’s become a hallmark of the firm, whether the design is in is wood, stone, or metal.

Kengo Kuma often goes to great lengths to achieve effects of lightness, too. For GC Prostho, he was wary of “thick columns,” he says. “I much prefer a scale that is close to the human body’s, that possesses the delicacy and strength of arms and legs.”

In more concrete terms, the ground level of this three-story hybrid is devoted to a gallery swathed in cypress latticework. Securely attached by steel plates to the walls-which are covered with a cement-board usually intended to be concealed but here polished to a sheen-the latticework actually performs structural duty in addition to being a marvelously deep modulator of the abundant sunlight that spills from the south-facing window wall. Sharply defined shadows, mesmerizing in their complexity, shift across the concrete floor. As you gaze upward, into the lattice vault, your eyes easily get lost among the plethora of patterns that present themselves from different angles.

Kuma based the handmade latticework on a traditional Japanese children’s­ puzzle called cidori, which translates as one thousand birds. “I had been interested in the potential of cidori for several years,” he says. He first used it as the basis for a concept house he designed to exhibit­ during the 2007 Salone Internazionale del Mobile in Milan.

For both that project and GC Prostho, an engineer scaled up the cidori and multiplied it to act as a structural system. “One of my aims was to generate organic forms from simple cellular elements,” he explains. He furthermore considers the fact that the lattices needed to be assembled by hand as an essential statement against dehumanization in the machine age.

Because seismic regulations required that stairs be supported by something sturdier than wood, Kuma translated the lattice forms into steel facsimiles, mating the two seamlessly together. The resulting staircase connects the gallery to the research and office functions occupying slightly more than half the 7,000 square feet, divided between the second and third levels and the basement. The latter is brightened by a narrow light well that Kuma conceived as a minimalist garden-into which a section of exterior latticework dangles like a suspended sculpture.

Other than the intricate lattice treatments, this is not a building with a lot of architectural detail. So Kenya Hara was enlisted to design signage­, display shelving for a number of the gallery’s lattice cubes, and the amusing white plastic tooth forms that stand guard inside and outside the building. With these lighthearted additions by his Hara Design Institute Nippon Design Center, a restrained landmark stimulates and intrigues, possibly pointing to new directions for Kuma.