The Architecture of Memory: Los Angeles Museum of the Holocaust by Belzberg Architects

“In Europe in the 1930’s, the years leading up to the Holocaust, people went about living their lives. Families had daily routines. Schoolchildren played in the parks. But nearby, terrible things were happening.” Hagy Belzberg’s opening remarks describe the scenario that looped through his mind, over and over, when he started to think about designing a new building for the Los Angeles Museum of the Holocaust. Recognized as the oldest of its kind in the U.S., the museum was founded in 1961 and has moved at least four times since then. 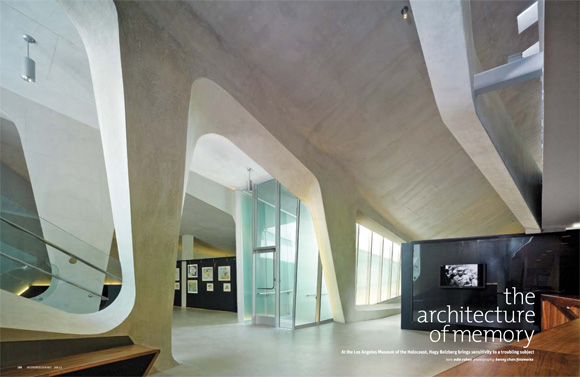 The city donated the latest site, 3/4 acre in Pan Pacific Park, and Belzberg’s design is of the park, tied to its vibrant life, without impinging on it. Given the solemn subject, he opted to bury most of the museum. Galleries, archival storage, offices, and parking occupy three subterranean levels capped by a green roof barely distinguishable from the park’s rolling topography. The underground location also ties in with his intention not to make this a statement building like counterparts by James Freed Design and Associates in Washington and Studio Daniel Libeskind in Berlin. Never mind that the $15.2 million L.A. museum is clearly Belzberg Architects’s magnum opus to date—seven years in the making, including permitting and excavation. “The architecture is just the container,” he explains. But a powerful container it is.

Though constructed almost entirely of concrete, the underground museum is anything but a bunker. Belzberg infused the interior with sunshine from clear skylights and translucent glass walls. He also used form—sloping ceiling panels of preformed concrete and knife-edged complex curves of sprayed-on concrete—to create a procession strictly adhering to history’s time line. There’s no aimless wandering. Instead, the journey begins with a transition from the park, life as we know it. From here, the entry ramp slopes gently down to the sparsely furnished lobby, where the lowered lighting and a sense of compression are immediately palpable. Belzberg maps out the path ahead with substantial columns and archways. More human in scale are framed “vitrine walls”  stopping short of the ceiling, which varies in height from 8 to 22 feet. Displaying graphics, video monitors, or artifacts, the “vitrine walls” reinforce the U-shape circulation route and break down the 32,000-square-foot expanse into exhibition areas.

To bring the subject matter home to the visitors, most of them L.A. students, the lobby features a video telling the story of Jack Taylor, a Hollywood High School graduate and U.S. Navy lieutenant who survived the concentration camp in Mauthasen, Austria. On view just beyond are 1930’s and ’40’s L.A. newspapers recounting events taking place a continent away. Deeper in, the pathway moves literally and figuratively into increasing darkness. The initial series of rooms focuses on the preceding years, Kristallnacht, and the ghetto. Then, at the far end of the U, the space opens up into a gallery mostly empty except for black-painted steel stands supporting computer monitors; each tells the story of a different concentration camp. Terminals with access to the Shoah Foundation database of survivor videos will soon be nearby in a glass enclosure, thanks largely to funds raised by E. Randol Schoenberg, grandson of composer Arnold Schoen­berg and president of the museum’s board of?directors. The return journey passes through a room focusing on resistance, followed by deportation and the camps. In the next room, liberation, interior changes signify hope. “The ceiling rises. The LEDs brighten,” Belzberg explains. “Then you’re back at the park. Natural light helps organize the story and acts as a guiding partner.”

The final stop is an open-air children’s memorial. To correspond to the 1.5 million people under age 15 when they were killed, he dig­itally composed the same number of round holes in lightweight concrete wall panels. Returning to his original allusion, he reiterates, “We’re next to the basketball courts and the jungle gym here. We can hear the laughter yet see the loss.”

Like the everyday environment, technology was part of the program from day one. An iTouch is the tour guide–every visitor receives one on arrival. “How do you connect with kids from different cultures, speaking a number of languages?” Belzberg wondered. His response: “The one thing they share is technology.” Operating technology, however, is almost entirely hidden. The ducts for air-conditioning and heating are integrated into the perimeter.

Another absence one can’t help but notice is the lack of Jewish iconography. That’s precisely Belzberg’s point. “This is not Jewish holy ground,” he states. “It teaches Angelenos about the Holocaust and how to prevent bullying behavior today.” He’s teaching sustainable building practices, too. The museum has already won the Los Angeles Business Council Green Building Design Award and is on track for LEED Gold certification.