The Brightest Smile: Long-Time Friends Come Together for an Arlington Dental Office

Longtime friends, architect Antonio Sofán and dentist Alfonso Patrón are both native Colombians with undergrad­uate degrees from the same university in Bogotá. The former set up Antonio Sofán Architect in Philadelphia, where the latter had specialized in periodontics and implant surgery at the University of Pennsylvania. When Patrón established his dental practice, Implant Logyca, in Arlington, Virginia, there was no question about who would design the office. 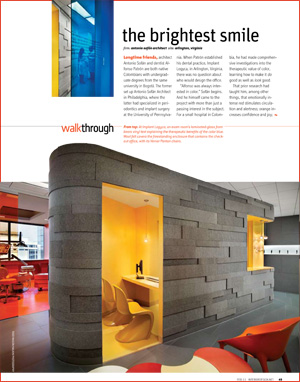 “Alfonso was always interested in color,” Sofán begins. And he himself came to the project with more than just a passing interest in the subject. For a small hospital in Colombia, he had made comprehensive investigations into the therapeutic value of color, learning how to make it do good as well as look good.

That prior research had taught him, among other things, that emotionally intense red stimulates circulation and alertness; orange increases confidence and joy; green reduces claustrophobia and anxiety and aids healing; and blue lowers negativity and stress while promoting weight loss and skin rebuilding. So he picked saturated shades of those colors for Implant Logyca’s four identical exam rooms. Only the operating and consultation rooms are white.

With the exam and operating rooms lined up along the primary window wall, Sofán confronted a logistical issue. “Those rooms needed to be isolated from the waiting area,” he explains. Reception and sign-out were also to be separate from each other. All in a relatively limited 1,850 square feet.

He solved the problem with a single element, a freestanding triangular volume positioned to screen the exam and operating rooms from the waiting area. On entering, patients proceed directly to the wide end of the triangle, where the receptionist sits behind a built-in desk. At the end of a visit, paying or discussing insurance occurs in a small office at the triangle’s point.

Overlapping strips of dove-gray felt wrap most of the triangle’s exterior. To accompany the gray, he chose an energizing sunny yellow for the side that faces the exam rooms. “It’s like a bite taken out of the felt,” he says. The entire interior is an identical yellow, right down to the Verner Panton chairs in the sign-out office.

Sofán applied the same strategy to the color-coded exam rooms. Everything inside-the walls, the cabinets, the upholstery on the treatment chairs-is exactly the same red, orange, green, or blue. So are the glass walls fronting the corridor, and vinyl text on the glass details that color’s particular benefits.

Next to each exam room’s glass front is an open doorway, no door. “Alfonso often works on several patients at once, moving quickly from one to another,” Sofán explains. The exception to that rule comes with the operating and consultation rooms at the far end of the corridor.

Its porcelain floor tile reverts to the gray of the felt wall covering, as do cemen­titious panels on the feature wall across from reception. They’re punctuated by the icy white Corian of three hor­izontal niches where Patrón displays tiny artworks sure to bring a smile to waiting patients: toothpaste tubes printed with portraits of actual food vendors from a Latin American market. The artist is a friend from Colombia.