Development was once implausible along the Iron Curtain. You might have built a watchtower, but the border area flanking the Mur river was essentially a Cold War no-man’s-land between Austria and Yugoslavia. Previously straightened to decrease flooding, the river was restored to its natural bends to improve the lot of native species and ecosystems. An architecture and landscape-architecture firm, Terrain: Loenhart & Mayr , participated in this European Union-driven project, after which Klaus Loenhart and Christoph Mayr went on to build a very different kind of watchtower, one for viewing the landscape outside the Austrian village of Gosdorf. 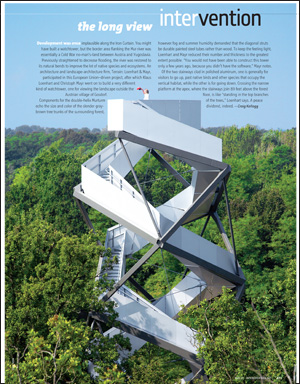 Components for the double-helix Murturm echo the size and color of the slender gray-brown tree trunks of the surrounding forest, however fog and summer humidity demanded that the diagonal struts be durable painted steel tubes rather than wood. To keep the feeling light, Loenhart and Mayr reduced their number and thickness to the greatest extent possible. “You would not have been able to construct this tower only a few years ago, because you didn’t have the software,” Mayr notes.

Of the two stairways clad in polished aluminum, one is generally for visitors to go up, past native birds and other species that occupy the vertical habitat, while the other is for going down. Crossing the narrow platform at the apex, where the stairways join 89 feet above the forest floor, is like “standing in the top branches of the trees,” Loenhart says. A peace dividend, indeed.