The Professor is In: Joel Sanders’ Academic Libraries

Straddling the line between academia and professional practice, Joel Sanders both teaches, as a professor at Yale University, and operates a New York studio, Joel Sanders Architect. The firm’s portfolio includes high-end houses and apartments as well as residential towers, museums, and galleries in the U.S. and abroad. Nevertheless, the healthiest showing is of buildings for prestigious universities.

His first campus commission, in 2007, was coincidentally at Yale: a combined lobby and media lounge at the Yale University Art Gallery by Louis Kahn. Sanders has since renovated facilities for Princeton University, where he’d taught before Yale, in addition to the University of Virginia, New York University, and the University of Pennsylvania. Completed, amazingly, after 2008’s economic downturn, these projects are notable for their diversity, yet all embody his belief that the single-purpose space is obsolete.

Why do your libraries look so similar to cool hangouts?
All the projects we’ve done in the past six years explore the impact of digital information technology on the lives of students, how it transforms the space they occupy.

That means socializing is as common as studying?
Computers allow students to shuttle between entertainment and research. They can work in groups or alone, 24/7.

What was the scope of your Princeton library, which won an American Library Association/IIDA Award?
We had to renovate a 1960’s building, and we wondered, How can we turn an old-school library into a wired, flexible space?

And how could you?
One issue entailed making the connection between the entry vestibule and the reading room more fluid, inviting students to explore. 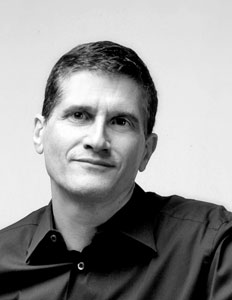 What did you do?
Since the vestibule was an underutilized space, we brought in the “library” aspect with a dynamic ramp. Inspiration was from the Biblioteca Medicea Laurenziana in Florence, Italy.

How do furnishings reinforce the scheme?
The vestibule now has terraced benches and a communal table. A desk for computer terminals is at the top of the ramp, which ushers students into the reading room.

Does the reading room also differ from the norm?
It’s divided into two adjacent zones. The quiet study area has maple acoustical paneling on the floor, walls, and ceiling. The casual study lounge is defined by teal banquettes like the seating in the vestibule.

You’ve learned something about study postures, too.
Yes. We provide various options—banquettes, tables, and workstations. Individuals transition from relaxed postures, while reading or watching material for the first time, to more active postures, while processing material and producing original work.

What were the unusual conditions at your U. Penn library?
This branch of the school’s main library is actually in a stadium built in the 1920’s. We were presented with a renovated area beneath the bleachers—complete with glazing between the arches. Because the library overall is half the length of a football field, the reading room is huge. We put an enormous banquette, upholstered in sky blue, against one long wall. At the rear, which is narrower, we built 10 study rooms.

Tell us about the lounge at the U.Va. architecture school.
Karen Van Lengen, who’d been the dean there, collaborated with us to refresh a double-height space for just $170,000. We spent some of that money on “sound showers,” 13-foot-tall cones suspended from the ceiling and fitted with speakers to create media microclimates. Sitting under a cone, students can share their iPhone play lists or tap into real-time lectures and events on the Internet, thus integrating new media to promote social interaction.

What about the NYU academic resource center, which is for undergraduate tutoring and counseling?
Tutoring and counseling can be intimidating. To make them welcoming, we added a café with a street entry—at the heart of the campus—as well as interstitial lounges with Internet access on the two levels above.

Back at Yale, how did you activate a staid museum lobby?
We transformed what had been one open space into a multipurpose student destination. There’s an information desk, which also handles book sales, before you get to the seating area. Everything is unified by a “black ribbon” of ebonized oak.

Do students at the various universities ever give you their opinion on a renovation in progress?
Yes. They’re usually part of the focus groups we hold. One of the most challenging aspects of university projects is to build consensus among the stakeholders, students included.

Would you like a do-over as a student?
Absolutely! But I must confess I was a chain-smoker at Columbia. I wouldn’t be a happy camper now.