The Un-Hamptons: A Low-Key Westhampton House

Francis D’Haene and Vincent Herbert have come a long way together, both geographically and profes­sionally. They met as sixth-graders in Belgium and now live in New York, where D’Haene, an interior architect, heads up D’Apostrophe Design, and Herbert is the CEO of the Pain Quotidien chain-let, beloved for its organic breads and rustic-modern cafés—of which his childhood pal has designed two. D’Haene is also responsible for the loft Herbert shares with his wife, Laurence Verbeke, and their three children. The latest chapter in this history of friendship and collaboration is a weekend house in Remsenburg, a sleepy hamlet near the village of Westhampton, New York. 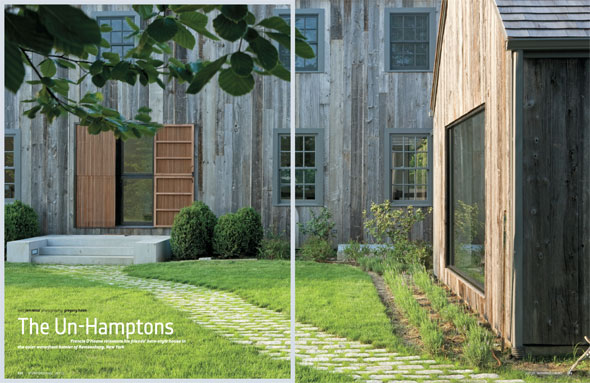 “Before renovating, Vincent and Laurence spent lots of time thinking about how to live in the space and organize it,” D’Haene says. He describes the ensuing—and ongoing—conversation as both casual and challenging: “They intelligently questioned everything, like the shape of the staircase or where to place the pool. They were interested in ex­ploring numerous possibilities.” In return, Verbeke credits D’Haene with being “open to all our ideas and demands.” Those included a strong connection to nature, an open floor plan, a dramatic central staircase, and a spareness verging on monastic. “I’m a big fan of John Pawson and Tadao Ando,” she continues. A farmhouse that she and Herbert once spied in southwestern France provided additional fodder, what D’Haene describes as “a minimalist vocabulary as well as a dialogue between old and new.”

In Remsenburg, that dialogue starts from the outside in. To lend patina to the 1980’s faux barn, D’Haene replaced sections of ordinary cedar siding with planks salvaged from an actual barn 200 years old. The original cedar remains on a small structure that connects to the expanded garage, which now houses a combined yoga studio and media room in front and two parking spaces in back. This division of functions is reflected on the facade: half cedar and half concrete patterned with horizontal formwork that simultaneously reflects and contrasts with the barn’s silvery verticals. (D’Haene used the same concrete treatment for the new pool house.) On all but the front facade and one side of the connector, he replaced original mullioned windows with plain glass and, he says, “the simplest aluminum frames we could find.” The intention was to unite the interior with the gar­den. “We played up the views instead of hanging a lot of art,” he explains. Indeed, the living area’s series of abstract acrylics are the sole paintings in the public spaces.

While the exterior balances old with new, D’Haene treated the 5,300-square-foot interior to a more radical overhaul. He demolished walls to establish a loftlike sweep culminating in a double-height living area, where a staircase with balustrades folded like origami ascends to three bedrooms. The balustrades’ white-painted drywall angles back sharply at the bottom, exposing the lower two steps’ open-sided treads and risers of Douglas fir, also used for the 1-foot-wide floor planks. In addition to serving as a statement piece, the stair visually separates the white-lacquered kitchen from a dining area enlivened by a Tom Dixon pendant fixture’s playful trio of different brass shades.

Sobriety returns uninterrupted in the airy living area, a study in minimalism. To one side, the only upholstered seating, a white sectional by Piero Lissoni, faces a planar fireplace of blackened steel. The other side is empty except for a pair of 1950’s chairs in steel and cord and a matching table with a cord top. “We asked Francis to put the emphasis on spare volumes instead of furniture. With the beautiful stairs, the focus is on the architecture,” Verbeke explains. A baseboard reveal makes the walls appear to float. The detail serves a practical purpose as well, allowing D’Haene to sink electrical outlets out of view. He likewise hid the air-conditioning ducts above floating ceiling panels. Between them pass original beams that he considered too skimpy as is. To bulk them up, he sourced antique oak barn siding 1 inch thick and applied it like veneer on three sides. Fixtures installed on top of the beams wash the ceiling with a halogen glow.

The calm continues in other parts of the house. Carrara marble floor tile stays cool when yoga is in session in the expanded garage, and built-in shelving corrals clutter, allowing the rest of the space to breathe. In the bathing area of the open-plan master suite, flooring is the quietest of inside jokes. It’s bluestone from D’Haene, Herbert, and Verbeke’s native Belgium.