The Word on the Street: A New Breed of Lobbies is Reinventing New York Real Estate

The boutique lobby, a new subspecies, has invaded. Fitted or retrofitted into predominantly midsize, midblock buildings, it is changing the game and the New York cityscape. 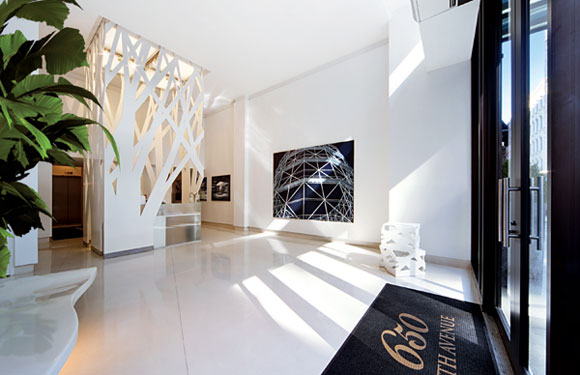 Through lobbies, the entire history of office and apartment buildings can be told. That history has been continuously written as architectural style moves on, but the speed of change has accelerated under the twin demands for improved technology and increased security. Also forcing change, a decade of front-page spectacles, such as the Guggenheim Museum Bilbao, has trickled down to raise expectations everywhere.

What has occurred is the advent of lobbies as environmental art—meticulously detailed, conceptually complex works conceived to be original, individual, and unexpected rather than safely corporate. Microcosms within a building and within the design field, they represent big experimentation on a small canvas. They are cool.

Take the small lobby in a Ladies’ Mile commercial building that Eran Chen converted into condominiums when he was a principal at Perkins Eastman. (He now heads his own firm, ODA-Architecture.) Around the concierge desk, he built a box from huge panels of white Corian cut out by water jet to produce “tree branches,” their shadows projected onto the plain white walls by a simulated skylight. The branch motif repeats as carvings in the elevators.”Converting old buildings, I’m intrigued by showing the layering over the years,” Chen says. “The idea was to create an extreme expression of the new inside the old, a contemporary white box inside a box of beautifully articulated 1906 masonry. The lobby is not an art piece per se, but it’s definitely conceptual.” 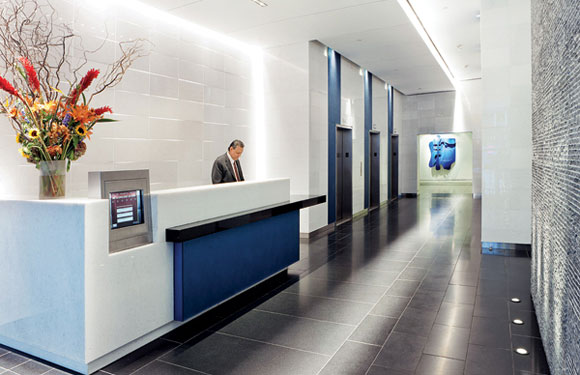 Many boutique lobbies feature actual art, like their bigger brethrendo, but the newcomers are not passive, like a gallery. Instead, they occupy a middle ground between art and architecture. At a glass tower built by Kohn Pedersen Fox Associates, artist James Turrell dissolved the lobby into a cavern of light, a mystic installation in the thick of the Manhattan hubbub. “The walls are just gyp,” KPF principal Douglas Hocking says. “You can get so much done now with so little, just a core idea and a few materials. I’ve noticed a tendency toward less ostentation and more refinement, a reaction to ornate work.”

Having long relied on acres of marble and granite to produce Karnak-esque moments of entry, designers are deploying light as a primary material. And they usually hide the source, so visitors occupy the glow and the color without seeing the bulb-miniaturization has advanced the cause. Many designers have also adopted Turrell’s technique for walls: They taper to a thin edge, dematerializing them as shiding the cove. Matter cedes to luminescence.

LB Architects relied on light in redesigning a 1989 office building, Tower 45. On the side plaza, which acts as a pocket park, and in the lobby, senior designer Eric Lukenich suspended monumental illuminated rectangles at odd, jostling angles. These light trays animate both of the spaces. 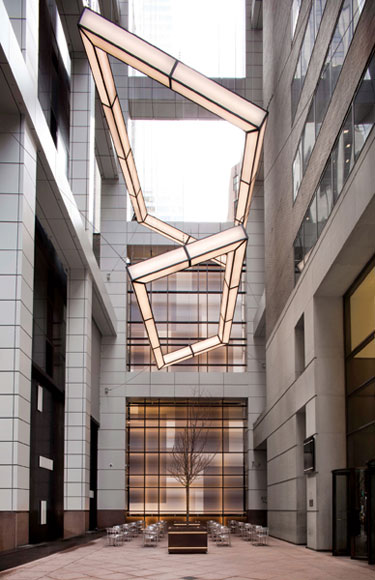 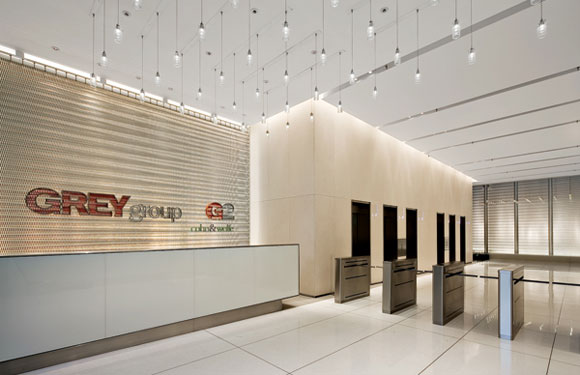 Rather than treating lights as chandelier objects in the lobby of a1959 office building, Lukenich tucked fixtures into coves and pockets to showcase an array of features, including a wall of stacked textured marble. He composed his interior from shifting, asymmetrical blocks. Classic simplicity has given way to material and geometric complexity.” We created a continuity from outside to inside, a procession that celebrates the entry into the building,” project manager Elizabeth Dull says. “In such a small space, detailing was key-the transition between materials, how each should meet another.”

In boutique lobbies, the attitude is liberating, the results are expressive, and the rules are few. Still, it’s important to respect the bones of the spaces and to facilitate functionality without foregrounding its mechanics. What matters is invention at the service of beauty and effect, making the private more public and offering a visual gift to the street. From the front doors to the elevators, a total environment delivers an intensified experience. Unlike modernist forerunners, boutique lobbies are conceived not as prototypes but as a site-specific new reality. 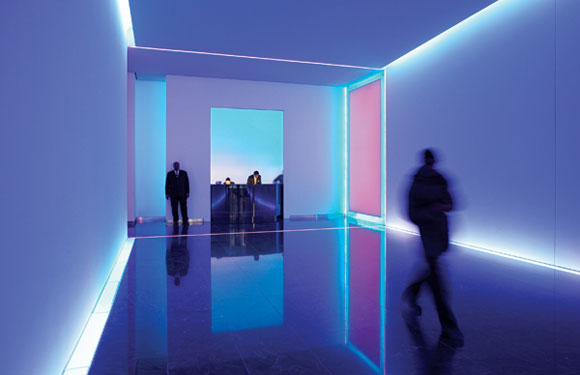