Though it’s approaching the end of its year-long 50th anniversary celebrations, New York’s Solomon R. Guggenheim Museum isn’t through with the festivities yet: December 11 saw the grand opening of its newest restaurant, The Wright. 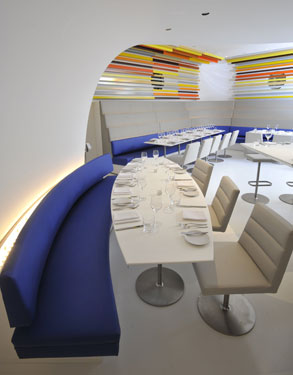 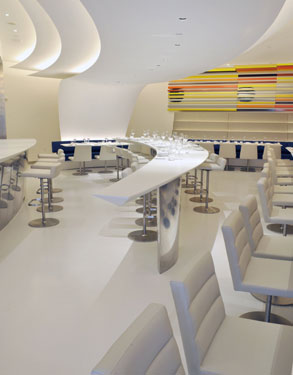 “It was both an incredible honor and an exhilarating challenge to work within Wright’s iconic building,” said Kikoski. “Every time we visit, we see a new subtlety in it that deepens our appreciation of its sophistication. We sought to create a work that is both contemporary and complementary.”

“Inspired by and created within an institution renowned for its art, architecture and innovation, The Wright will extend that experience to its food and service,” adds the restaurant’s director, Aaron Breitman. “The Wright will appeal to neighbors seeking stylish and sophisticated dining as well as visitors who want to experience the thrill of New York in one of the city’s greatest cultural treasures.” 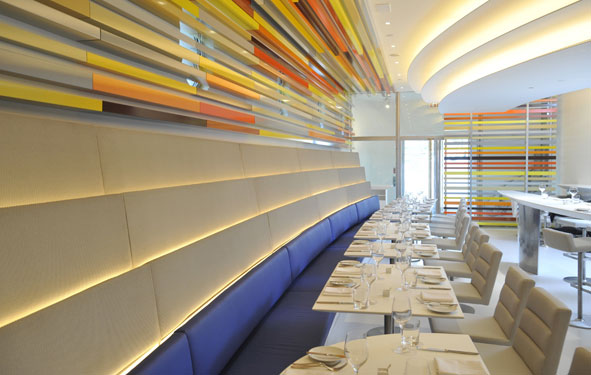 Centered on a communal table, Kikoski’s channeled Lloyd Wright’s iconic spiraling white design from 1959 in the nearly all-white 1,600-square-foot-space. Standouts include a curvilinear walnut wall layered with illuminated fiber-optics offsets a bar topped in seamless white Corian and clad in a shimmering skin of custom metalwork. A sweeping banquette is glammed up with vivid blue leather seating backed by illuminated planes of woven gray fabric underneath a layered ceiling canopy of taut white fabric.

The ceiling is also home to the restaurant’s signature artwork, a colorful site-specific sculpture of horizontal powder-coated aluminum planks by British artist Liam Gillick that marks the entrance and descends from overhead to cover the Wright’s walls—just like in the museum’s galleries.

Images courtesy of The Wright.