This may not have been the year of in-person office unveilings—but the environments of yesteryear are quickly adapting to herald in the workplaces of the future. Here are the top 10 offices waiting patiently for its occupants to return. 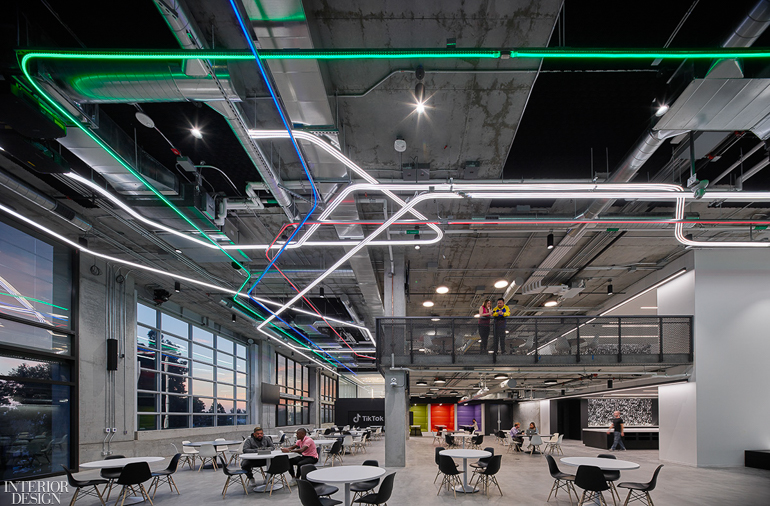 It started out as a Chinese video dance app. Then kids picked it up for their 15-second bursts. Adults, of course, followed suit, and now TikTok is a global phenomenon. Gensler’s vibrant design of the company’s first American headquarters is housed in a building in the Culver City sector of Los Angeles. TikTok comes stateside on three floors that incorporate two additional mezzanines to total 120,000 square feet. Naturally, a sense of movement, intrinsic to TikTok’s culture, pervades. 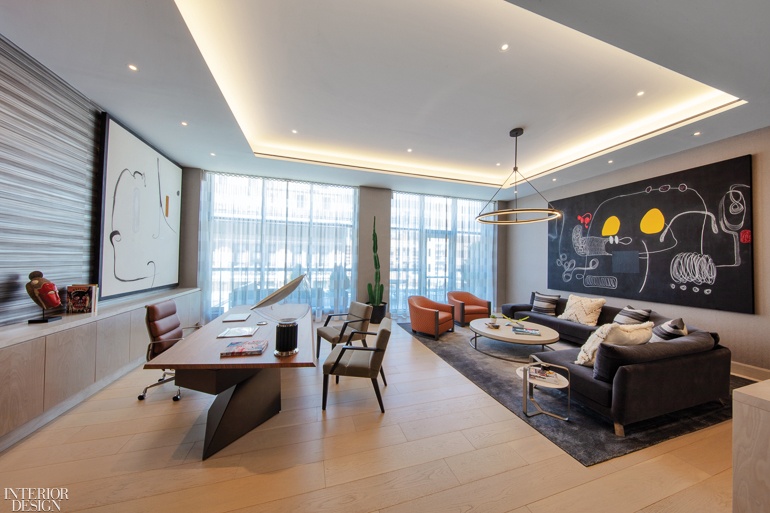 Roc Nation CEO and co-founder Desiree Perez goes back with Jay-Z to 1996, when she booked him to perform at a club she was managing. Now, overseeing a staff of 450, 52 percent of whom are minorities, she leads development and growth across Roc Nation. That includes the New York office’s move from the Garment District to Chelsea, where Perez handed over the mic to Jeffrey Beers International.

3. HOK Designs HQ that Celebrates the Senses for Shiseido Americas 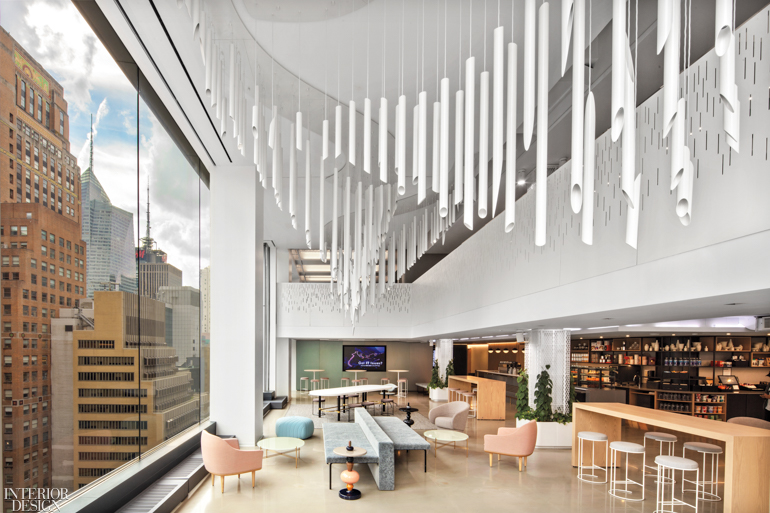 Transformation is key to what Shiseido is. When CEO Marc Rey began the search for new headquarters, he had a seemingly simple goal: cohesion. “He requested a place of community where beauty and leadership could shine,” begins Bill Bouchey, principal and director of design and interiors at HOK, which won the bid to design the Shiseido Americas workplace in New York. 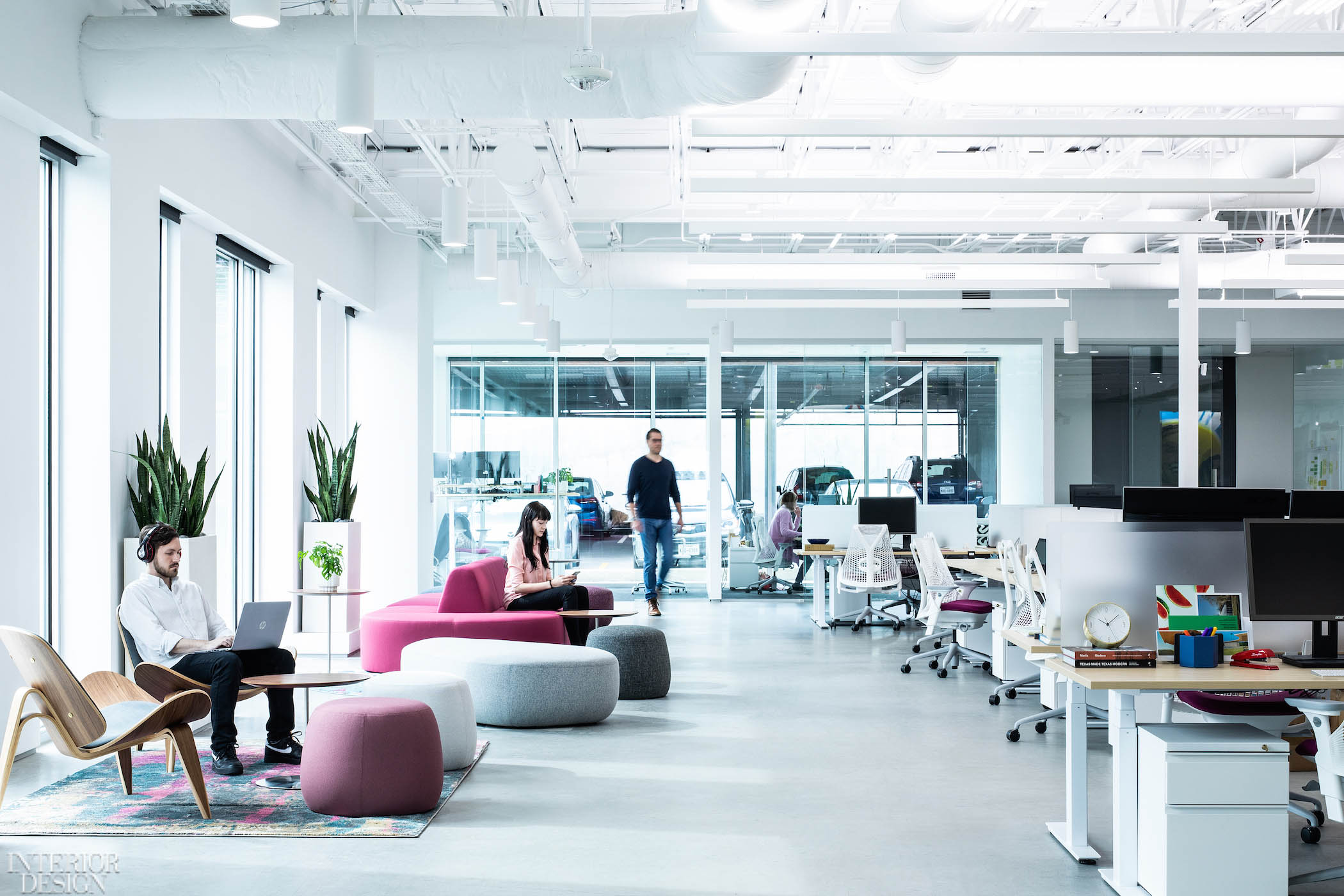 Ten years after flipping on its first light switch, LED lighting manufacturer Ketra outfitted a bright and airy space of its own in Austin, Texas, working closely with parent company Lutron Electronics. The brand’s new headquarters is reflective of its evolving business, featuring smart lighting systems from its updated product portfolio. 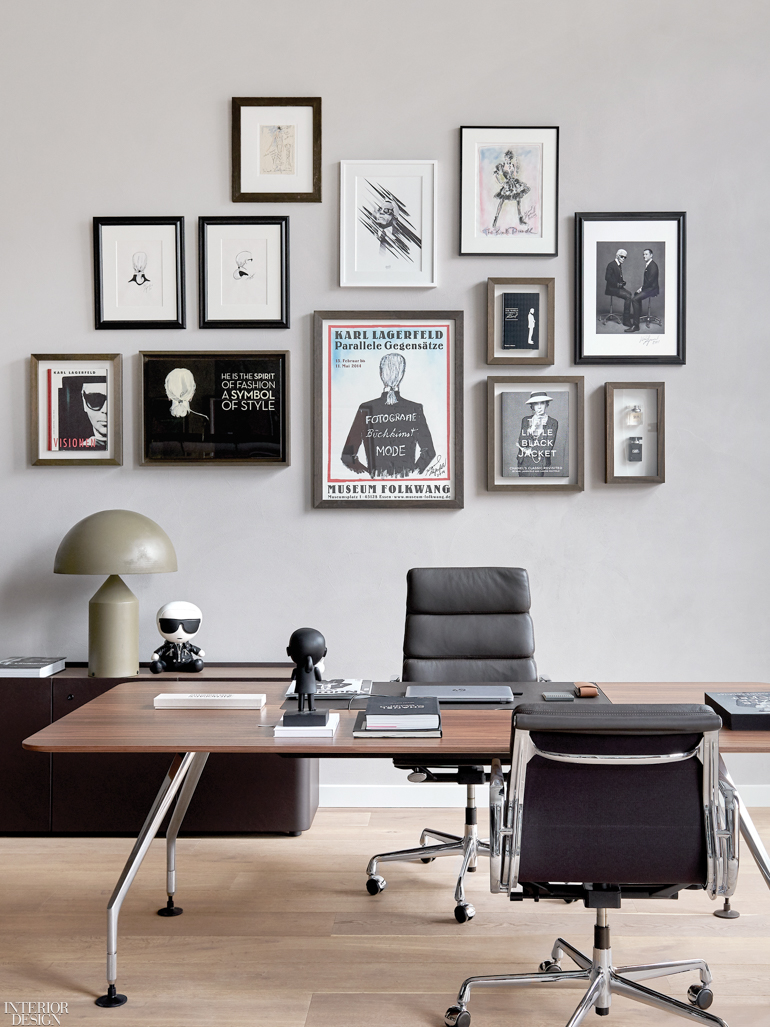 “When we chose this place with Karl, we were inspired by its beautiful Louis XVI–style architecture,” Karl Lagerfeld CEO and president Pier Paolo Righi says of the fashion brand’s new global headquarters in Amsterdam. Even thought creative visionary Karl Lagerfeld never set foot in the completed headquarters, he remains ever-present there. His image is everywhere: in self-portraits, photographs, caricatures, dolls, models, and displays of clothing he designed. 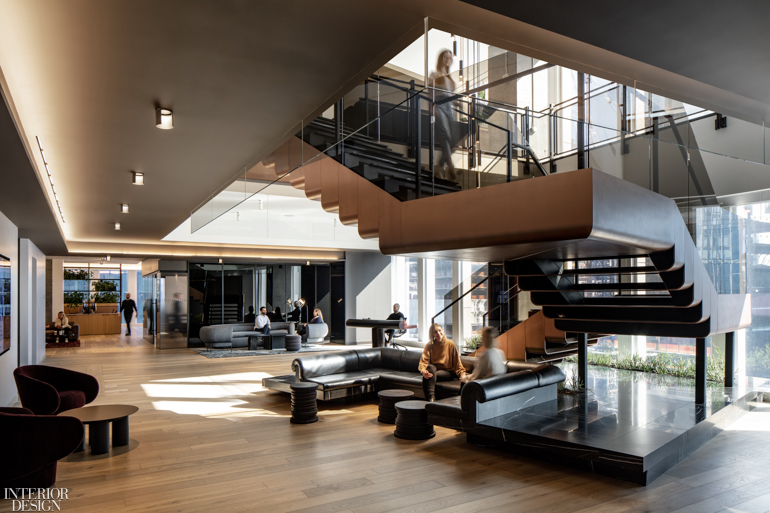 When Equinox opted to locate its new headquarters in Hudson Yards, the company turned to architecture, strategy, and experience design firm Architecture +Information. The plan? To create a high-performance HQ that would reflect its evolving identity as a premier, luxury lifestyle brand. The workspace is designed to increase creativity and innovation by bringing people together—featuring open floor plans and interconnected levels with comfortable corners carved out for private conversations and relaxing breaks. 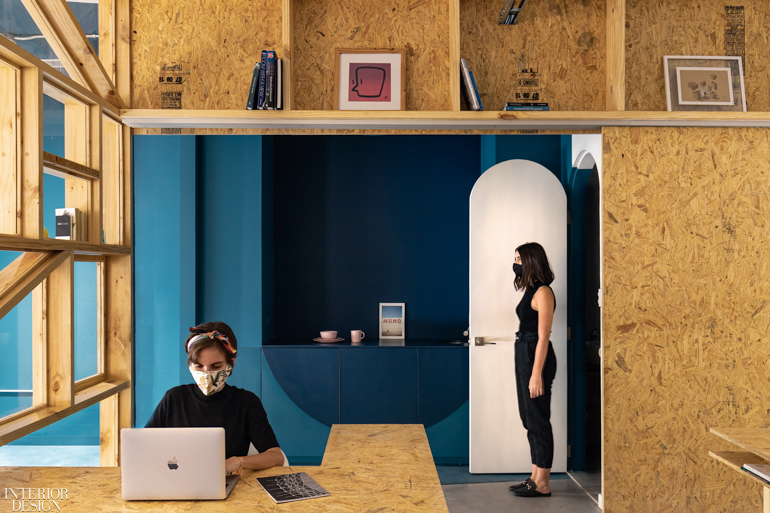 While “business as usual” hardly exists right now, there is at least business. And as companies adapt to new routines, there continues to be changing needs for client-employee dynamics. For technology services company Mendotel, located in Guayaquil, Ecuador, those needs included a new space with flexibility and privacy. Designers Juan Alberto Andrade and María José Vascones took up the challenge, creating what Alberto Andrade deems “a reconfiguration of completely sealed spaces.” 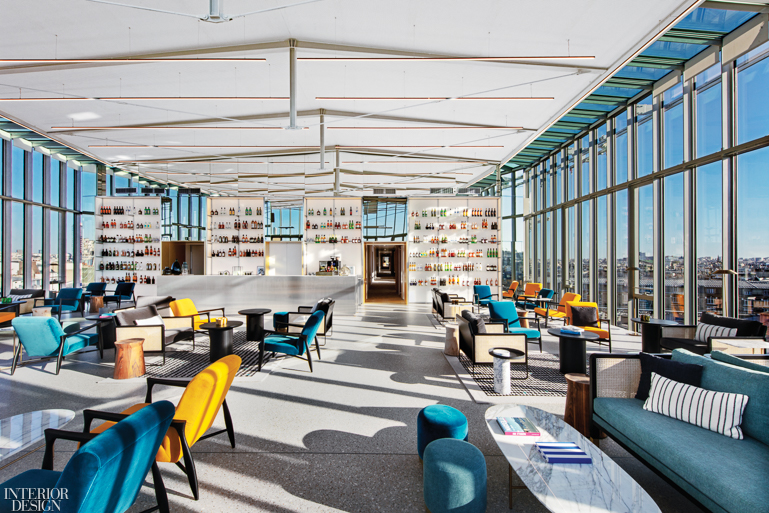 Olivier Saguez is far from convinced that the office is dead. “I don’t think you work best from home,” the Saguez & Partners founder asserts. “You don’t come into contact with others. So, you stay stuck with the same ideas. Working today is a collaborative experience and you need a place that creates connections.” The firm’s latest project—new Parisian headquarters for the Pernod Ricard wine and spirits group—is designed to do exactly that. 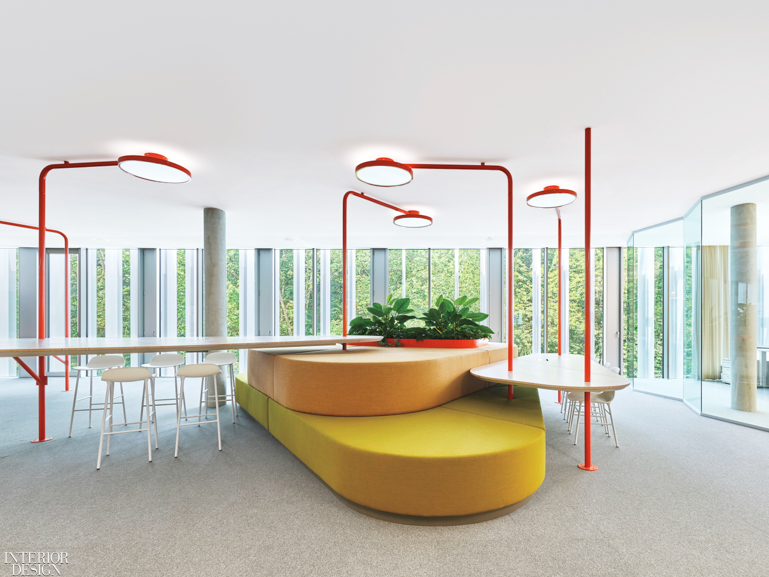 Board members sharing an office? Not likely. Yet at their own insistence, the four that work at Robert Bosch Automotive Steering headquarters in Schwäbisch Gmünd, Germany, do just that. That’s thanks to an innovative shared desking system by Studio Alexander Fehre, which designed the 110,000-square-foot office. 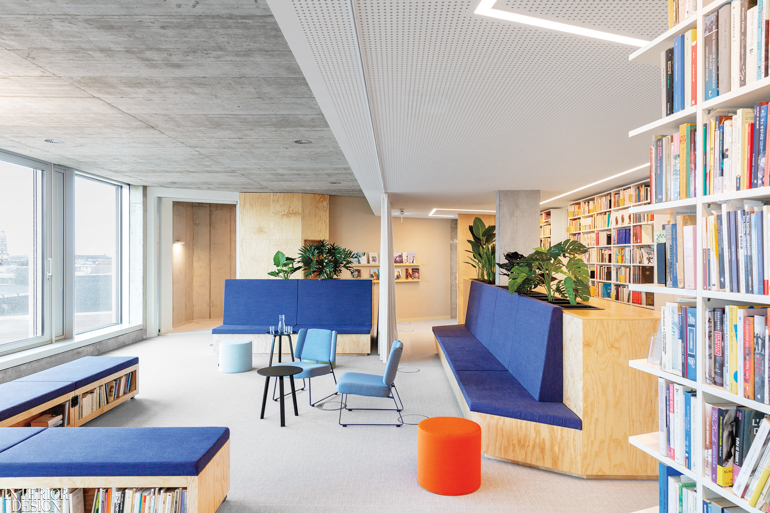 Leading European book publisher Suhrkamp Verlag found a permanent home in a six-story ground-up building by Bundschuh Architekten. At 35,000 square feet, the office is smaller than previous locations, but thanks to ingenious interventions by Kinzo, it not only accommodates the 135 employees but also displays thousands of the imprint’s titles in a way that’s both functional and decorative.