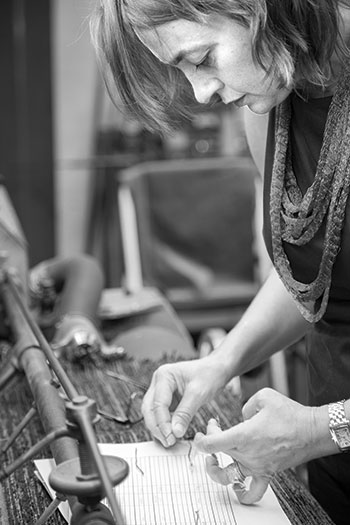 Born in South Africa, interior and textile designer Toyine Sellers lives in Stockholm and operates an atelier in Saint Marcellin, France, that creates extraordinary fabrics, rugs, and tapestries for a who’s-who of industry insiders, Fox Nahem, Drake/Anderson, and Brian J. McCarthy among them. Her work graces Chanel salons and the Hôtel de Crillon in Paris. She became one of the design and fashion world’s most in-demand artisans after being exposed to textile-making while working at Peter Marino Architect. Sellers just finished renovating and decorating a Japanese-Swedish fusion weekend house for her family in Värmdö, filling it with pieces by creators she loves—and, of course, a few of her own voluptuous textiles.

Interior Design: Did you always want to become a textile designer?

Toyine Sellers: No. I trained as an interior designer at Parsons in New York and Paris, and went on to study architecture. I designed interiors throughout the U.S., the U.K., and South Africa for nearly 20 years, eventually moving back to the States because I had landed a job with Peter Marino—and he was a big shot!

ID: How did that influence your sensibility?

TS: My creativity there was mainly put to use developing materials for clients. We collaborated with many fashion brands: Dior, Fendi, Donna Karan. My projects were mainly Chanel, a label that strongly influences my textiles—the use of metallic threads, for instance. Peter opened up a lot of doors for me, and he’s been a great supporter of artisans.

ID: How did you end up producing your own textiles?

TS: The crème de la crème of the artisanal world paraded through Peter’s studio. They seemed so glamorous, so independent, and had all these fancy materials. It was the opposite of my job: sitting at a desk, doing the same thing every day! I thought, Wow, I should become one of those!

Right when I left Peter’s, one of my favorite artisans passed away. His wife contacted me to help keep alive his legacy, and I got involved in his business. Later, I happened upon an opportunity to purchase an atelier that was about to close. Although it looked glamorous to run such a business, I discovered it’s quite challenging financially.

ID: Did learning more about the process change your approach?

TS: Most textile designers learn the craft from the ground up, from the warp and weaving structures. I just picked it up as I went along, which at first was all very confusing. But it was actually an advantage not to know what was “correct” and what the limits were, since I never wanted to be constrained by the rules of weaving.

ID: How did you start creating rugs?

TS: I landed a commission to make five rugs, but had never woven anything on a handloom. So, I pulled out all my yarns and started to play with the pedals, making tons of “mistakes.” I wasn’t worried about the samples lasting; I just wanted them to look good. A weaver would have been in shock—the mess I was making! But I tried to maximize texture because I love richness and thickness and juiciness and all those sorts of yummy, gushy things.

ID: Do you think that’s what people respond to?

TS: I suspect they’re surprised
by what they see: It’s not conventional. I don’t regard my fabrics as fabric; I’m creating little pieces of art.

ID: You use very old looms.

TS: We have six: Three hand looms, three mechanical,
including two of the first
mechanical looms ever produced. The advantage is that they’re rudimentary, cavemanlike. They don’t weave very fast, but I can use leather and crazier yarns with less trouble on them.

ID: And what about new fabrics?

TS: Last year, I was so inspired I created six fabric designs. And then I wanted to produce them in all colors! I did 20 colorways of one fabric, 14 of another, and 11 of another. We are now weaving all the samples. I have to control myself at some point; on average, we make 200 to 300 samples a year.

TS: It’s our weekend/holiday home, in the Stockholm Archipelago. I did all the plans and drawings, which took me back to my architecture days. There are hardly any walls—just lots of windows. The house disappears into nature.

ID: Is the interior covered in your fabrics?

TS: My house is covered with some of my mistakes! Plus, I used things no one has ever ordered but that are my favorites, such as the silk-linen fabric on my living room sofa.

ID: Tell me about that amazing tapestry hanging in the bedroom.

TS: It’s the first rug I designed for myself. A mix of lamb leather, cow leather, fur, wool, and low-hair wool, it was fabricated in Sweden by a woman who weaves very traditional Svenska trasmatter rugs.

The linen rug at the foot of the bed is also one of my first, inspired by a fabric. Called The Spirit of Phinda Ré Three, it’s beautiful and very simple, in shades of ivory, cream, and blue-gray.

ID: Did you create other rugs specifically for the house?

TS: The previous owners had lots of things from Japan, including tatami mats in what’s now my office. When we renovated, there wasn’t room for them. But I felt we needed a rug in there. I used the idea of the tatami mat, but with a big black border, in a mix of wools and gray and beige leather.

ID: Where did that unique dining table come from?

TS: It’s by Danish landscape designer Tage Andersen. We saw an amazing piece of his in a gallery—and it became our first purchase for the house.

ID: And those marvelous ceramic plates?

TS: They’re by Gertrud Båge. She had a little atelier around the corner. I went in every day when I was renovating the house and fell in love with her color combinations. I became her biggest client, and probably went overboard: I have about 40 of her plates on the walls. It’s a good thing she retired; otherwise, it would have been the end of me.

ID: What are you working on now?

TS: Now that I’ve finished my house I can concentrate on the atelier. I’m a creative person, so I find it rather challenging to run a company. I’d far rather do all the fun stuff like creating the colors. I’m trying to organize myself, to be a better communicator, to be better with time. I’m improving myself to improve the function of my team, my atelier, and my creations. I’m under the gun!