No need to convince Jim Olson of the merits of institutional design, museums in particular. The studio now known as Olson Kundig Architects, recipient of the AIA’s 2009 Architecture Firm Award, has long been deeply immersed in the arts. “Working with artists, craftspeople, and collectors is our specialty,” Olson says. “Museums are like big art-filled homes that you can visit. They allow us to share our work with everybody—otherwise, so much of it is private.” Even before his firm won its own museum commissions, he and his partners collaborated with others, notably Venturi Scott-Brown and Antoine Predock Architects. There were also three independent renovations, notably Seattle’s Frye Art Museum and Wing Luke Asian Museum. 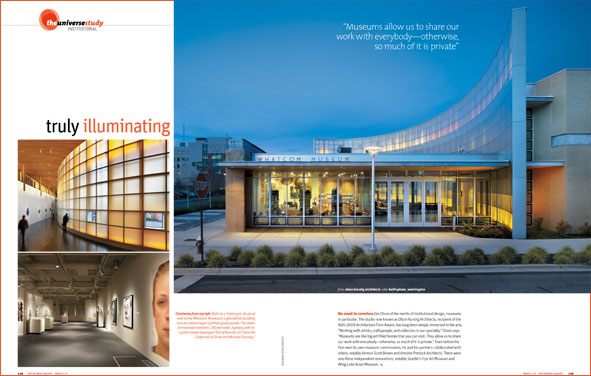 The Lightcatcher building, a satellite location for the Whatcom Museum, is not only Olson’s first ground-up museum but also the first to go for LEED Silver certification in Washington state. “Since sunlight is scarce in the Seattle area, we captured as much as we could,” he explains. He did this with the help of a huge, curved curtain wall sited facing southwest to follow the sun’s arc. The wall comprises two layers of translucent glass 20 inches apart, supported by a steel frame. On interior panels, amber-colored fritting warms the light as it enters the circulation spaces behind, even on cloudy days. Galleries are spread over both levels, while offices and classrooms are upstairs only. Part of the 42,000-square-foot building, a tilt-up concrete construction, is topped by a green roof.

Other institutional projects on tap? The Bill & Melinda Gates Foundation visitor center and an expansion of the Gethsemane Lutheran Church, both in Seattle, as well as the Sun Valley Center for the Arts in Idaho.