IT’S NICE THAT AND STEWDIO
A verbal roller coaster by the creative collective It’s Nice That and the digital design firm Stewdio was Selfridges’s first window to have a takeout element, namely fortunes. The 14-foot-high wooden “ride” dispensed 30,000 plastic balls, each containing a card bearing a message for 2012 made unique by a single adjective. “It was colorful and playful and dynamic, something to stop people in their tracks,” It’s Nice That online editor Rob Alderson says. Judging by the long line of fortune seekers, the headache of generating enough non-repeating, royalty-free adjectives was worth it. Stewdio founder Stewart Smith eventually accomplished the task with an in-browser JavaScript hack of Wiktionary. “The only issue­ was that, by the very nature of the project, you didn’t know which adjective was going to come out,” Alderson says. “That led to some awkward situations if you were with your parents, your partner, or a client.” The machine seemed to have a mischievous glint in its eye. 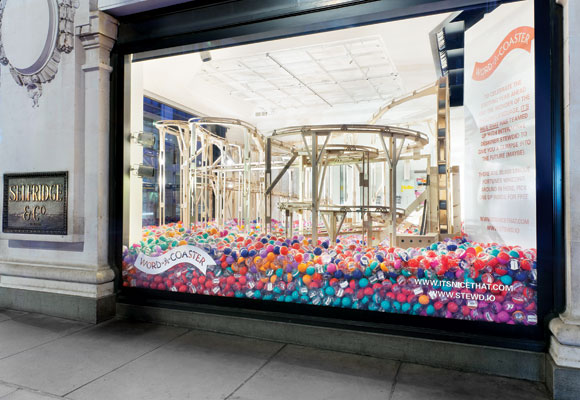 OLIVER RUUGER
A famous 1948 photograph by Philippe Halsman captured Salvador Dalí airborne-in the company of three flying cats doused with water­ thrown from a bucket. “I love that photograph,” buzz-generating accessories designer Oliver Ruuger says. “I approached the window display in a similar manner, conveying movement and adding a surreal story for viewers to discover.” 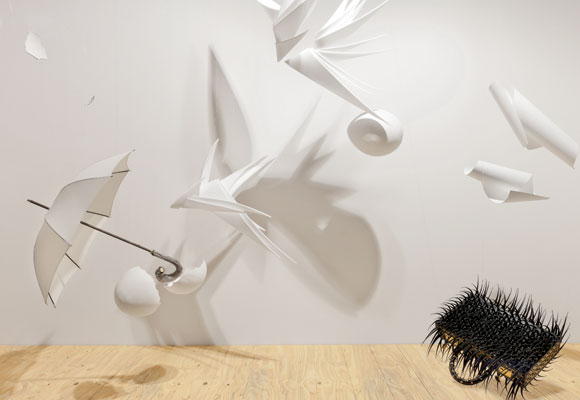 Instead of cats and water, Ruuger’s briefcase in hand-stitched English bridle leather with brass studs and rapid-prototyped mechanical “hairs” was offset by an unfurled umbrella, a giant eggshell, and origami birds. “I believe that contemporary luxury objects should have an element of playful mystery about them,” he says. McCullough describes the composition as “minimalist but really polished.” And she’s not even a Dalí fan. 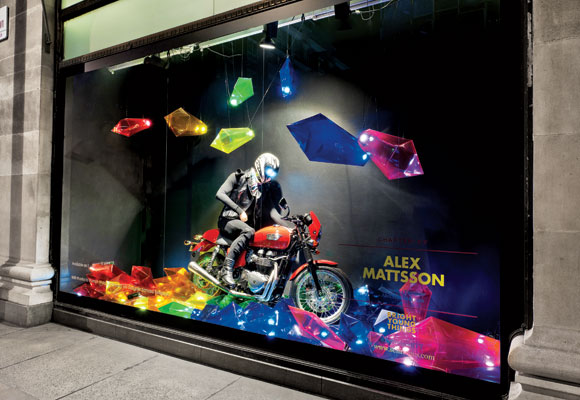 ALEX MATTSON
“Every time I opened a newspaper or a magazine while the windows were up, Alex was featured,” McCullough says, laughing. One can certainly see how a motorbike driving through giant rainbow crystals might enrapture the press. But what led there? “Psychedelic and otherworldly ideas are a foundation of my work, and I was researching a lot about the power of crystals at that moment,” the menswear designer explains. “There’s something enchanting about these perfectly geometric rocks that exist in nature. Add my obsession with the full color spectrum and my preferred mode of transport, and you have a mad window display.” In a moment of sanity, he realized he’d need to rope in a set-designer friend, Samara Tompsett. She and Mattsson spent three weeks making the crystals out of cut acrylic sheets, adhesive, and LEDs.

MAARTEN VAN DER HORST
When someone calls his own signature garment a “drag-ified” Hawaiian shirt, as women’s wear designer Maarten van der Horst does, you would expect a certain exuberance from his displays. And you would not be disappointed by his window’s exploding limbs in floral fabric.

“I was really curious about how things work behind the scenes at Selfridges, what happens to the old mannequins,” he says. “I went to the mannequin graveyard, took home a lot of body parts, and painted them mint green or lilac.” After two nights spent assembling the parts with duct tape and superglue, the desired effect­ was achieved.

“The shapes and colors were odd but still sightly fem­inine. My work is about fun,” he says. Fun for every­one but the security guards. They were grumpy when he managed to step in a pan of mint-green paint and leave a telltale footprint in Selfridges’s in-house Hermès boutique.