10 Questions with… Aaron Richter of Equinox 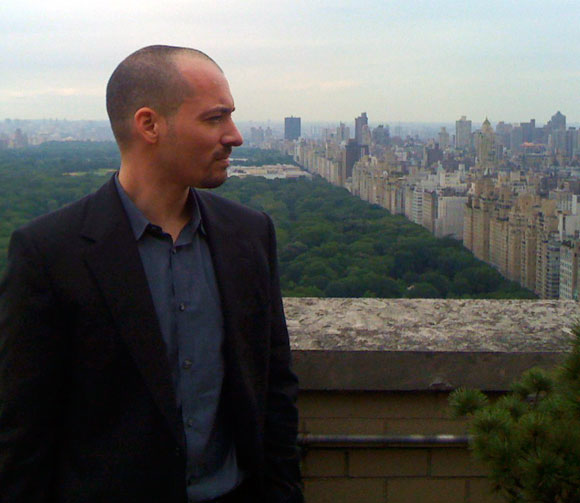 . For vice president of design Aaron Richter, that balance is a puzzle that grows more satisfying with every season. Richter—who cut his post-graduate teeth as an environmental designer at

before taking design positions at

—has brought a big vision and big personality to Equinox since 2008. As several new locations roll out their awnings, he talks aspiration, motivation, and the voyeuristic side of working out.


Interior Design: How crucial is design ingenuity as Equinox expands to new sites and cities?

Aaron Richter: We try to stay true to a modern, industrial aesthetic, though that can mean a lot of different things… Where it’s about hand-cut block wood and big sheets of metal in Greenwich, Connecticut, in Downtown LA it’s more of a sculptural approach.

Before we start any project, we get to know the neighborhood and what we feel is the right tone to strike with the locals. We also have a lot of travelers who come to different clubs expecting to have new experiences. Luckily, since the buildings we come into are so radically different, that’s what we’ll inevitably be creating.


ID: When conceiving new clubs for Equinox, how much room is there for interpretation?

AR: We’re pretty good at knowing which elements we’re putting into any club—a basic strength suite, a cycling studio, a yoga studio, usually a Pilates studio, cardio areas. The pieces that ebb and flow depend on the market. In SoHo, for example, we have stretch tables right in the middle of the floor. That wouldn’t necessarily work in other locations, but for there it works and is totally appropriate.

There may be a kids club if there’s a demand, or a boxing studio… Sometimes there will be a pool, other times a TRX [suspension training] studio. While our typical box is 30,000 square feet, it’s on one floor in one building, on four floors in another. In some spaces, there’s lots of natural light. Other times, no light. We have to remain really adaptable.

An Equinox club in New York.


ID: How do you get the ball rolling among your design team?

AR: We’ll have a boots-on-the-ground team look at each space during development deals, helping to craft the deal. We’re focused on programming and layout. Once we settle on the financial implications, we’ll do some “test fits.” We’ll go through and say, “There’s an opportunity to put in a skylight,” or “We can build in a mezzanine that overlooks a lower floor.” We ask questions about how members get from the front door, to the locker room to the fitness floor, and back out. Architecture can be very hierarchical, but everyone I work with—in all of the creative departments—works together at every phase and tries to talk in the same voice. That makes for a much stronger product.


ID: What are some of the newest Equinox clubs going to feature?

AR: Our new Marina Del Rey location [in California] was an existing fitness facility done in the early eighties, featuring three massive skylights that were disregarded. We took down the mezzanines blocking most of that light, and now it’s like working out at the beach. Our Summit, New Jersey, location is actually a revitalization of an old trolley car station from the twenties. We’re having a great time embracing and celebrating the structure we’ve found there.


ID: You’re also finally opening up outside of the U.S., correct?

AR: Our first international property opens in London this October, and we’re also developing a space in Toronto, set to open in the first quarter of 2013. The London club is in the old Rainbow Room… where the Stones played, where Twiggy was famously photographed. It was home to the Biba design movement, and is almost temple-like. It’s very inspiring.


ID: What are the trickiest puzzle pieces for you when building a fitness club? Plumbing, air quality, layout, lighting, sound insulation?

AR: There’s a lot of talk internally about that energy, and how to encourage people to use all of a club. We try to avoid creating dead ends, and to make a lot of spaces that overlook other areas. Gyms are social incubators, and a little voyeuristic, so we like our members to see and be seen. 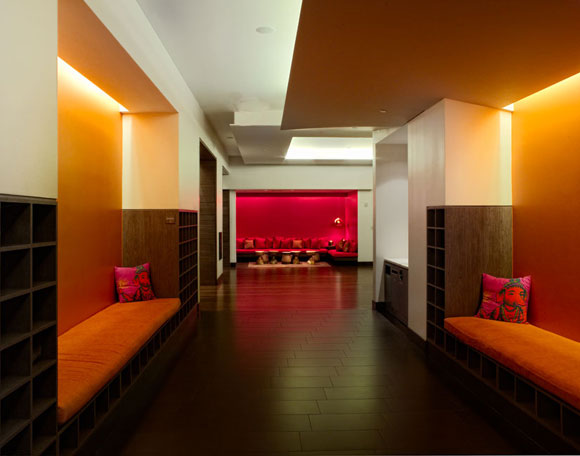 
ID: How do you combat the “wear and tear” factor that must happen to materials within a gym?

AR: Like a hotel, our clubs get beat to hell. Things need to essentially be bulletproof. Despite that, we try to make the experience human-scaled, and feel like someone’s intelligent modern home. Lighting is critical, so people aren’t walking into a big field of fluorescent light. I like to make sure there are intimate moments built into any space, so people don’t always feel like they’re in the middle of six hundred other people.


ID: What kind of an emotional response do people have to their fitness club?

AR: It’s all aspirational, at the end of the day. Our clubs aren’t cheap to join; members are spending $130 to $140 a month to work out with us. Our design is a stage on which to celebrate the activity going on. When people take care of themselves, in this space we provide, that says a lot about what they want to do with their lives.


ID: What are some of spaces that have always visually inspired you, and continue to stand out for you today?

AR: I traveled a lot when I was working with Starwood Hotels, and my time in Asia—Hong Kong, in particular—made a real impression. Anytime you have a city where space is such a premium, creativity is in on grand display.

Meanwhile, I’d say the Phillips Exeter Library by Louis Khan is one of the most successful buildings I’ve seen. And I’m always blown away by the work of James Turrell, the artist-sculptor behind the Roden Crater. I recently saw a piece of his in the permanent collection at [New York’s] PS1, and he just always manages to create a sense of awe.


ID: In terms of your own creative work, are you good at moving on once a project is through, or do things stay with you a while?

AR: [Laughs] I had done a hotel in the Maldives, and that’s where my wife and I went for our honeymoon. So, here we are, newlyweds in paradise, and I was lying there obsessing about the choice of door handle I’d made. My wife just turned and said to me, “We really should have stayed somewhere else…” I suppose I’m my harshest critic.