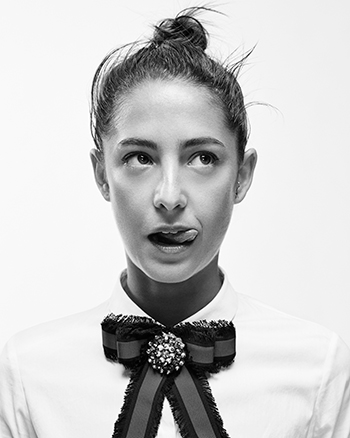 When it comes to navigating artistic mediums, few designers rival Anna Karlin’s enthusiasm and “can do” mentality. The London native, a Glasgow School of Art alum, relocated to New York in 2010 to establish an art direction practice after experimenting in graphics and set design. The breadth of her practice has since expanded considerably, functioning as both a veritable showcase of her multidisciplinary approach and an avenue for her to realize projects large and small, whether in response to a client’s brief or her own creative instincts. Following the latter has yielded highly sought-after furniture, lighting, and jewelry, such as the unapologetically bold Chess series of sculptural furnishings that riffs on the classic board game. (She recently collaborated with designer Fernando Mastrangelo to create Chunk, a limited-edition series of Chess cast in his signature materials of sand, silica, cement, quartz, and salt.)

Karlin’s oeuvre can be experienced in her recently opened Lower East Side showroom, where everything is designed down to scent and flatware. Smaller-scale material experiments commingle with artfully arranged vignettes that feature her Moon Cabinets and Curved Chaise alongside objects Karlin collected while traveling and antique chairs by nearby gallery Dienst + Dotter Antikviteter. A traditional English country kitchen and Shaker-inspired cabinetry add warm domestic touches that belie the property’s history as a former burned-out print shop. In fact, Karlin researched and recovered archival documents depicting the original storefront, restoring it to its original state over a period of six months. She weighs in on this process below.

Interior Design: Your career began in art direction—what galvanized your move into design?

Anna Karlin: I always worked across mediums, from graphics to set design and digital. The need to make work that was from my heart—and not always in answer to a brief—became very clear to me. I love both, and as humans both is a beautiful balance. I am very open to other people’s energies and for that reason I love the collaborative effort of client work whereas the furniture / sculpture / lighting / jewelry is about looking inwards.

ID: The opening reception for your new showroom had quite the turnout. Tell me about the space and how it came together.

AK: It was around the corner from my old studio. Joe from my team saw the door open one day and a “for rent” sign and walked in and chatted with the landlord. Two months of negotiation and six months of construction later, here we are!

ID: What were the most challenging and rewarding parts of this process?

AK: The hardest part was the loss of head space. We did so much construction and interior work and of course I’m very particular about all the details so it requires a lot of planning, decision making, time, and real focus. That in and of itself is a full time job, so it was hard to suddenly have your head pulled into something so deep while trying to keep on top of everything else. Thank God for the best team in the world! The most rewarding is coming in everyday, loving what we’ve created, and seeing it begin its journey. I see it as a person—a whole being that will grow and evolve with me, a co-conspirator.

ID: How do you stay inspired in the studio?

AK: If your eyes are up and your mind is open, there is never any shortage of inspiration. To feel uninspired is to be depressed—something would have to be fundamentally wrong in my heart. Of course, we all have those days, but for now I count all my blessings and those moments thus far are fleeting. My grandmother had a good expression: ‘a bird may fly overhead but you must not let it nest in your hair.’

ID: What have you learned about running a business that you didn’t know when you started?

AK: Running a small business is no joke! You’ve got to really want it. But mainly it has concretized my resolve that everything is possible.

AK: My very first furniture launch. Looking back, I’m not quite sure how it all came together, but I had a huge party in what is now the Beekman Hotel when it was still derelict. Krug sponsored and I was able to build a beautiful set, design wonderful food, music, lighting, the works. It was the start of a great adventure that I’m still very much on.

ID: You recently joined forces with Fernando Mastrangelo to create Chunk, which sees your iconic Chess series cast in his signature materials. What did you learn from this collaboration?

AK: That we should all be doing more of them.

AK: London. It influenced me hugely. Growing up around all the Georgian and Victorian architecture has a big impact on your eye for proportion, balance, and context, three of the most fundamental design considerations.

ID: What are your favorite materials to work with, and why?

AK: Very truthfully all of them. To choose would be the same as asking a painter to take out a primary color.

ID: What’s the best thing about your job?