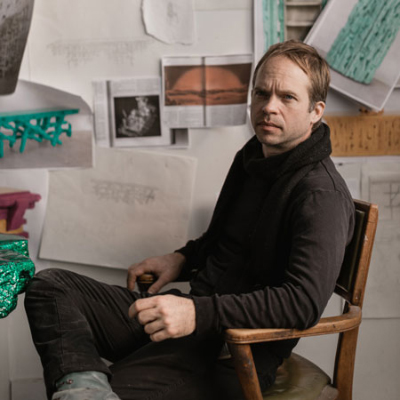 He’s created pieces for Interior Design Hall of Famers Bill Sofield and Peter Marino. But for all the works debuting in “Chris Schanck: Unhomely,” opening at NYC’s Friedman Benda March 1, he was his own client. Schanck grew up in Pittsburgh and Dallas, before earning his BFA in sculpture from SVA. He switched to furniture while earning his master’s in design from Cranbrook, and then set up his studio in Detroit in 2011, first working out of his home, and now in a 3,200-square-foot commercial space nearby. His signature series is called Alufoil, in which he welds scrap steel into furniture shapes, covers them in industrial foam and aluminum foil, then layers vibrant tints and dyes into multiple resin coatings. He tells us more.

Chris Schanck: As a kid, my family moved 25 times. Each time, I was given total freedom to decorate my room—and a chance to reinvent my taste. I thought that when I grew up, I wanted to explore lost worlds, like Jacques Cousteau, or work on film effects or set design building my own world.

ID: What experiences then got you to where you are now artistically?

CS: My first lessons in process and material came from visits to and, when I was old enough, summers working in the aluminum factory where my father worked.

At home, there was little traditional art and design exposure, so I turned to comic books and science fiction to feed my imagination. But late one Christmas Eve, when I was sick with the chicken pox, my mother, an artist at heart, allowed me to see the presents under the tree. She had worked all night in secret to wrap each present in aluminum foil. They were the most magical thing I’d ever seen. What was inside those boxes didn’t matter, it was the vision of the reflective landscape that I’ve always remembered.

ID: How did your Alufoil series come about?

CS: I made the first piece for my graduate show at Cranbrook, after I’d pivoted from sculpture to sculptures you could touch, realizing that design could open up a new territory and history to me. I’d been intuitively sculpting furniture out of wood and foam, but then I thought to skin and unify them in the most compelling surface I could.

ID: Is color integral to your work?

CS: It is. I’m currently working on a figurative table of a kneeling man holding a tray. The man is sculpted from sticks and wood from around the neighborhood, but the form is covered in a gold-colored foil. The humility of his pose connects to the humble beginning of the core materials, but the gold transforms him into something of awe and luxury, as though he was touched by King Midas.

ID: What’s it like living and working in Detroit?

CS: After Cranbrook, Detroit was the nearest city to me, plus its energy was unique. There is pain and calamity almost everywhere here, but that can drive a necessity to create new realities. There’s a vibrant community of people here who are humbly thriving and incredibly generous. A friend and fellow alum sold me my house in exchange for making him furniture. Where else does that happen?!

When I started the studio in my house, people came in from across the street out of curiosity, and I slowly began to hire some of them as assistants. I recently moved my studio to a commercial building a mile away. 25 people work with me, and about half of them are Bangladeshi women from my neighborhood, one of whom had managed quality control for a leather factory before moving to the U.S. Not everyone is an expert like her—amateurs and young students work side-by-side with seasoned assistants learning as they go. Because the studio began in the context of my home, there’s a lot of trust in and respect for all our individual roles. Detroit made me fall in love with art and artists all over again.

ID: How did Bill Sofield and Peter Marino discover you?

CS: In a New York gallery a few years ago. I first worked with Bill, on the Tom Ford Madison Avenue flagship, a dream project! With Peter, we started off doing one Dior store on Long Island. But it expanded to 12 more in cities like Paris to Mexico City.

ID: Other than your phone, what’s an item you couldn’t live without?

ID: Do you collect anything?

ID: What is the first app checked in the morning, and the last you downloaded?

CS: Dark Sky—prepping for the weather is half the battle in Detroit—and Let Go.

ID: What is your design process?

CS: I always begin with sketching. The first step is to find the spirit of the piece—quick, iterative drawings allow me to explore form and idea without worrying too much about practical constraints. Next, I’ll make maquettes in paper, wood, or any quick and dirty materials, and then a full-scale mock-up before building the permanent bones of a piece. I never know exactly what the final form will take.