10 Questions with… Dan Kaplan of FXFOWLE

This year marks Dan Kaplan’s 29th at FXFOWLE Architects, an architecture firm with offices in New York City and Washington, D.C. Now a senior partner, he’s designed numerous skyscrapers and buildings that have come to define the New York City skyline and beyond. Most recently he finished work on Allianz Tower, a 40-story building in Istanbul, Turkey, that earned the country its first LEED platinum designation for an office tower, and is currently working on a number of residential and commercial projects closer to home in NYC. Over the years he’s won numerous awards for his work from the American Institute of Architects (AIA) and World Architecture News, and is a visiting lecturer at Cornell University’s College of Architecture, Art, and Planning, his alma mater.

Here, Kaplan discusses the sustainability of skyscrapers, his notion of what he calls the “generic iconic,” and how his mother’s work as an interior designer inspired him to pursue a career in architecture. 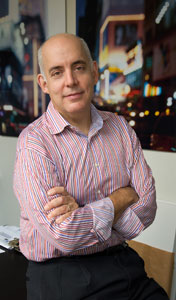 Interior Design: Sustainability seems to be a common thread with your projects. Why is that?

Dan Kaplan: We think of sustainability too narrowly within the design community. It’s not only about energy efficiency, fresh air, or daylight. Sustainability in its larger sense is the understanding that what we do—the way we build buildings and make spaces—is intrinsically linked to the larger rhythms of the world. I think the difference of perception of what we do relates to a larger whole, and is really a fundamental difference from where we were as a culture, even 50 years ago at the peak of modernism, to where we are now being more in tune with the larger rhythms and flows of the earth. I think the most important thing that we can do as designers and architects is to transform the way we think about cities, buildings, and spaces to really support that. One of the great things from a carbon-impact point of view is that making a better city is a great thing, because the more people who live in cities the better. But with that also comes increased density, so we need to introduce more greenery and daylight. It’s a common thread to see that every project contributes both to the larger urban context and also to the larger natural context.

ID: You’ve worked on projects in locales as far away as Istanbul and Azerbaijan. Do you find that these places take the idea of sustainability as seriously as we do in the United States?

DK: In some regards, more so. I finished the Allianz Tower [in Istanbul] and it’s Turkey’s first LEED platinum office tower. In places where there hasn’t been a continual construction of state-of-the-art buildings, and there have been pauses over the past 20 or 40 years, you see almost a leapfrogging effect. In Istanbul they wanted it to be a world-class, standard-setting building that could compete on the global stage and stand up against properties in New York City, San Francisco, Singapore, or Melbourne. For example, sometimes in developing countries their cell-phone service is so far superior because they were never saddled with landline technology [like in the United States]. It’s the same idea. They’re using this as a way to leapfrog and catch up. They don’t want to start in the middle of the line, they want to start at the front. These types of projects are setting the standard for other countries.

ID: You’re currently working on a 66-story tower in NYC called 3 Hudson Boulevard. Are there any challenges to applying your sustainable philosophy to this and other skyscrapers you’ve worked on?

DK: I think skyscrapers and high rises in general are some of the most sustainable building types because with a minimal land footprint you can create the highest amount of habitable space. It also sits on top of the new 7-train subway station at Hudson Yards. For a 1.7 million square-foot building, there are only about 50 parking spaces. People get to the building using mass transit, so this is a great example of a dense city using a sustainable approach. Now, having said that, the best thing to do is to make the spaces and experiences inside as connected to the natural world as possible. We crafted the building to be more about daylight, sometimes we call it a “daylight machine.” The building sits in Hudson River Park, so you arrive through the park, come into a light-filled space, take the escalators to the lobby, and see back out onto the Hudson River.

It’s very important to me that we designed the building so that it doesn’t get darker the deeper you get, but instead you see daylight and greenery as soon as possible. The tower contains numerous terraces and balconies. Also, we used oversize glass and [each floor has] 360-degree exposures, so the idea is to give ample light and views while having the ability to be on the 30th floor, go outside, and take a breath of fresh air—it’s a great thing.

ID: I’ve noticed that skyscrapers are getting skinnier than ever. Do you think this is just a passing fad or something that is here to stay?

DK: What you’re seeing are generally residential towers, and it’s a relatively new phenomenon. [In Manhattan] it has to do with zoning and municipal control, and was conceived around the idea of large floor-plan commercial buildings. What’s happened over the past 10 years is that people are realizing the value of heightened residential buildings in certain markets justifies the expense of building tall and thin. Some of these needle towers have floor plans that are about 5,000 square feet. FXFOWLE did Sky House and the floor plan was about 4,000 square feet, whereas a typical tower is maybe three times that much. I think in dense places like Manhattan, Brooklyn, and San Francisco, where land value is high, the idea of building tall and thin is catching on. Another trend you’re going to see is building tall and big, because we do have limited land resources in these cities and we want them to be dense, and it’s generally more effective to build more floor area on a given site.

ID: You’re also working on The Chamberlain, a luxury residential building also in NYC, that’s replacing a parking garage. What was one of the challenges of this project?

DK: What is cool and interesting about this project is that we really believe in place and what gives a specific street or neighborhood its unique character. One of my concerns with the globalization of design is that—I call it the “generic iconic”—everyone wants an iconic structure, but it could be located anywhere. What we strive to do is make each project a character to its specific neighborhood. The Chamberlain is an essay on how to do a modern version of the classic Upper West Side Art Deco-style building. Some good examples are The Majestic on Central Park West and many of the buildings on Riverside Drive and West End Avenue. We wanted to take a very strong tradition and context, and be part of the conversation, but we didn’t want to copy directly. We wanted to reflect the heritage of these Art Deco apartment houses and also the current times. So we took the basics of this play of vertical and horizontal—vertical piers that sore into the sky and horizontal brick and glass that reach out into the cityscape—and create a weave of that. We used the motif of vertical windows—you see this on a smaller scale in Art Deco towers—but transformed them and jumped the scale so that they’re larger, more modern, and more powerful in their proportions.

ID: Are you selective about the clients you work with?

DK: The marriage of an architect and client is one of the most important parts about getting a successful design. A client’s aspirations, goals, and desires for the project have to have resonance with the architect, and the architect’s predispositions and design interests have to have resonance with the client. The more those are in alignment, the better the end product will be. When we win a job, and there is an alignment, it feels right, but when we lose a job and there isn’t an alignment, it’s maybe for the better.

ID: Where do you go to seek inspiration?

DK: There are three places. The first is the city around us, in my case New York City. It’s so varied and so rich and it’s the ultimate inspiration to walk home and look up. The second is the natural world. We have a vertical pinup board at the office called “Totem,” and it’s amazing the percentage of photos of boulders, landscapes, and mountains pinned on it. I’m very interested in the geological formations—you can see that a little bit in Allianz Tower and The Chamberlain—and how they relate to building forms. The third area would be my colleagues. We have a very dynamic, collaborative environment here in the studio. It’s inspiring to come in the morning and look at a design problem and have three different people look at it in three different ways and we come to the best solutions that way.

ID: What’s the first thing you do when starting a new project?

DK: I want to understand the context and the neighborhood and what it’s all about. I want to create a narrative of what this building wants to say about a particular place.

ID: When did you first know that you wanted a career in architecture?

DK: True confession: I grew up reading Interior Design. My mother was an interior designer, in fact she was one of the first female industrial design students at the Art Institute of Chicago. She was really into Frank Lloyd Wright, Eames, and Breuer, and I grew up in a house of mid-century modernism, so design was always around us. I think that I got it through osmosis. At one point my mom designed a family vacation house for us in Canada. I was 15 and my brothers and I helped built it, so I think that sealed the deal.

ID: Is there a project you’re currently working on that you’re particularly excited about?

DK: There’s a project called Circa Central Park [in Harlem] that forms one-quarter of a traffic circle on the northwest corner of the park. I love it because it’s a remarkable site. You hardly ever get to have a curved site in NYC, and it has such a direct relationship to Central Park. The building is a series of terraces that arc off of the curve and slowly peel away from the form, giving way to a series of penthouses overlooking the park. We were able to meld our preoccupations of sustainability and great views of park, but because of the curve we had all of this westward-facing glass, so we created a series of fins that optimize the views to the park but also block out the western glare and heat. Then we took the fins and made a colorful expression. On the park side they’re green and from the city side they’re a burnt orange color. We really tried to give honor to this very important spot in the city.