has helmed his eponymous firm since 1990 and challenged the conceptual confines of city life all the while. The son of film actor Dan O’Herlihy (who was, himself, trained as an architect) and the youngest of five children, he began university at 16 (California Polytechnic University, and later at the UK’s Architectural Association). Before striking out on his own, he worked on the Metropolitan Museum of Art while with

, the Louvre while with I.M. Pei, and the acclaimed Hybrid Building in Seaside, Florida, as an associate at

. Today, he is a sought-after lecturer and an adjunct professor at USC’s School of Architecture. An abstract painter and sculptor, O’Herlihy uses his artwork to continually refine his eye as well as his instincts, and takes great inspiration from these complementary disciplines. Here, he shares his thoughts on the challenges and opportunities of building in Los Angeles, incremental urbanism, and his credo of ruthless optimism.

Interior Design: Lorcan, you’re extremely passionate about your home city, Los Angeles. What are its greatest attributes and most significant challenges?


Lorcan O’Herlihy: Well, LA is really a metropolis of smaller cities, and as an architect it’s required that we deal with multiple stakeholders for any substantive work. Then there’s always been an issue in LA of how the city addresses its public space. This is a major challenge—there is approximately four-percent public green or open space within the city, versus a city like New York where there is seventeen percent. LA is a privatized city?—some of my architecture work has been done with private developers. I do see opportunities to work within this existing condition, particularly concerning city incentives tied into a private development that creates areas of public open space. 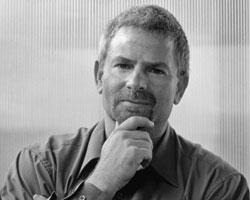 ID: Your project Formosa 1140 is seen as a great success in terms of that concept. How did you make it happen?


LO: Formosa 1140 is the red and orange building I did in West Hollywood, and it was my attempt to rethink the convention of courtyard housing typology. Courtyard housing has always been a prominent approach to housing projects in LA, and it was a major goal of mine to reconsider it, to push the volume or density on the building to one edge, then create a public open space for the community. There were logistical hurdles at first. We had to address questions like, if you have a public park on private land and someone breaks their leg, who’s liable? We also managed to get the proper amount of parking underneath the park and put three feet of earth above the parking in order to plant a proper park. The city provided incentives. In the end, it turned out to be an enormously successful project, and it is frequently used within the city as an example of what is possible. In fact, it was a site on a recent mayoral tour?—an initiative by the National Endowment of the Arts—?in which eight mayors from other cities came to see what we’ve done, as well as to learn the great potential of public-private partnerships.

ID: And what do you imagine


LO: Over time, it’s very possible that this concept will be replicated incrementally, with secondary or tertiary swaths of open green space popping up within the city, in between streets. It can allow a whole new way of experiencing the city. I believe that strong change happens in cities this way, by what I call “incremental urbanism.” I envision a scenario in which a developer creates another “pocket park” next to a pocket park I’ve done. The opportunity for engagement and interaction has doubled. It’s an idea that can become a catalyst.

ID: What are other ways you see Los Angeles shifting its focus to allow for more public engagement and opportunity?


LO: I recently attended a panel discussion at Frank Gehry’s Walt Disney Concert Hall about the development of downtown LA. A point was later made about the Bunker Hill area, and how there seems to be a disconnect between the very large developments and sites there and the community that existed there before the Disney Hall and the Grand Avenue Project. It was suggested that rather than build these incredibly large developments, the neighborhood would be better served by three or four small developments, with different architects involved. It would allow for more incremental growth.

ID: Your work seems to be deeply influenced by anthropological concerns. How does this perspective surface within your construction?


LO: I’m always looking at our urban projects?—which comprised ninety percent of our work?—through the lens of its place within its contemporary city, within society. I don’t see the structure as separate from the city, and I’m not interested in doing autonomous objects in a city. A building has to have a relationship with the sidewalk and the street. It has to be relevant within the context of broader issues. I have the conviction that architecture can enliven a community. It’s what I always refer to as “ruthless optimism.”

ID: How do you communicate this “ruthless optimism” to your clients?


LO: When we sit down with a client, we ask, “What are your aspirations?” If, as we converse, they understand the significance of being collaborative and iterative and want to do an important project that solves their problem but also fits into the city, I know that’s a good client. Of course, we’re always going to be dedicated to the creation of spaces that are economical and functional?—yet at the same time it’s extremely important to look at the broader idea.

ID: What projects are currently on your plate that are allowing this sort of broad thinking?


LO: By seeing through the process of Formosa 1140 and developing our take on the “hybrid building,” we’ve been tapped to take on three projects in the arts district of downtown LA. This is a really exciting time to be working there. There are many “centers” of LA, of course?—one could argue Long Beach, another Santa Monica—?but downtown is becoming all the more prominent as we speak. People are continuing to leave the suburbs, and look to move to areas like downtown as they want restaurants, retail, commerce, and infrastructure—?a complete life in downtown LA. It’s particularly exciting, since it’s traditionally been a manufacturing area, not zoned for housing, so our projects are actually going to be utilized to create new zoning criteria. Expect it to become known for inventiveness—?LA’s equivalent of New York City’s Meatpacking District.

ID: How do you keep your firm on point, and moving along with your vision?


LO: We have about twenty-three people currently—?two directors, project architects, and otherwise a layering of key people, all of whom play a big role. I tend to give the seed of an idea, and then we develop it in collaboration. For us, form and function are discussed in tandem?—neither following the other. Ultimately, my role is to determine what the main issues are to address.

ID: And meanwhile, you’ve always been very involved in education?to this day. Why is this important for you?


LO: Teaching always played a big role for me; I’ve always balanced my practice and academia. Two to three times a week, I get to go into a studio and engage grad students and discuss ideas, then come back into my practice and bring that optimism. My employees appreciate it, I think, since it has resulted in an office culture that is in so many ways like a studio.

ID: All the while, you’re a major proponent of passive design practices and materials. How does this dedication to sustainability work within your creative process?


LO: We’ve always taken a holistic approach towards design, and in my opinion strong architecture is always sustainable. Ecological considerations are crucial from day one of planning, not just add-ons to a disconnected structure. I believe that parameters are helpful, and that pragmatism can inspire great creativity. When you have to be resourceful and find ways to improvise, you’re able to inflect a structure of logic. Poetics and pragmatics can coexist very harmoniously.