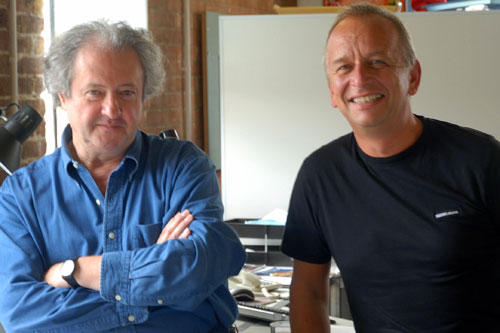 When it comes to the big business of luxury hotel travel, few firms boast a resume as influential as UK-based ReardonSmith Architects. With world-class clients such as Le Meridien, Fairmont, and Hilton—not to mention the award-winning revamp of London’s legendary Savoy—Patrick Reardon and Conrad Smith lead a team of all-stars who anticipate the current and future desires of discriminating travelers.

Here, the intrepid duo shares their perspective on the ever-changing hospitality industry, not to mention the secrets of their successes.

INTERIOR DESIGN: What are the most exciting projects you are currently working on at the moment?

It’s a large portfolio and there are many answers to that question. We’re as excited about our budget hotels as we have been about the Savoy.

We have some wonderful things going on in Eastern Europe… many new builds. PR: For some reason we’re very big in Azerbidjan, and have lots of work in Russia.

ID: Is there a moment in the process that really fulfills you?

We get excited when we deploy our expertise and expose clients to potential they didn’t recognize for themselves. It’s great when you’re in a meeting and are able to say, “Have you thought of doing this?”

We were refurbishing a hotel in Mayfair in London and found a way to build an extra hundred guest rooms on site. The benefit of that sort of thinking can be incredibly lucrative. PR: We found well over $200 million in assets that the client didn’t realize he had.

ID: In the highly competitive hotel market, what are clients asking for to set them apart?

If you look back to hotel design since the end of World War II, the hotel industry used to be all about international expansion of major chains, such as Hilton.  This has many fine attributes: If you went to a strange part of the world you could be in a safe environment with clean sheets and clean water. In recent years, however, that level of standardization has become a liability. Clients are looking for individuality and idiosyncratic design.

ID: So would you say the “boutique hotel” concept has permanently ratcheted up the pressure on the big chains?

The moment that people like Ian Schrager stepped out into the forefront of the industry was very refreshing. He used design as a tool. We also strive for that, to present something out of the ordinary. A client may say, “We can’t do that, we’ve never done it before,” yet our colleagues always push us to do things that haven’t been done.

ID: What is your opinion of the word “sustainability?”

Our take on true sustainability is longevity. Think of design that lasts, like the Four Seasons in the Seagram’s Building in New York. It hasn’t been changed… perhaps refreshed, but the basic animal is as good now as it was at its beginning. The greenest building is one you can convert.

When over the course of the year you fly ten thousand people through airports you can’t really call it sustainable. Sustainable travel means you go by ship, go by foot, bike, or horse, though modern customers are preconditioned to demand speed.

ID: When refurbishing an iconic destination, what’s the negotiation process like between innovation and staying true to the original?

In terms of the journey we had in reinterpreting the Savoy, we had the chance to revive one of the best—if not the best—hotels in the world that had an amazing international following, with celebrities, politicians, film stars, and so forth counting themselves as regular guests. When we were invited to look at it, quite frankly the building was in a state that did not justify its reputation. The old lady was under the weather, and the underpinnings were in dire condition, particularly areas like plumbing. The other problem was that the hotel had undergone a series of Band-Aid refurbishments over the years, which were not well planned or recorded. It took us months to understand. Often it wasn’t until we were on site that the only thing holding up certain walls was wallpaper.

Has reaction to the Savoy’s refurbishment been a high point for you?

We had this wonderful opportunity with the Savoy. We put in a new steel frame, lowered it down and added forty extra square feet per floor. It looks as if those suites had been there since 1911, because we saved the moldings and restored everything to how they’d been done originally… the marble fireplaces and parquet floor. For all intents and purposes, it was elementally the same place. One day in fact, two ladies were walking by us in reception and we heard them say, “Isn’t it wonderful that they haven’t changed a thing?”

That was the biggest compliment that we could receive. We spent five years on it, had an office on site, and it was worth it. We won the “Hotel of the Year” award.

ID: And how much importance do you place on things such as awards?

Our company has been in existence for twenty-two years now, yet it wasn’t until last year that we decided to enter our properties for awards.  We thought about it very hard and decided to enter several entries because our staff benefits from that. If one of our projects won an award, the people who would gain the most are those who work for us.

ID: And how is the synergy between you and your design team?

ID: And do you have a particular creative philosophy?

We design hotels from the inside out, and each member of our team is committed to creating properties that fit respectfully within their environments.

Commercially, we have an understanding of how these places make money. We create ways to get the best return for the investment, and have been known to respectfully turn down projects.

ID: What is the bottom line when it comes to taking on a new project?

At the end of the day, we’re in business to make money. That’s not the ultimate object, and we could make more by taking more commercial projects. For us, it is about projects we can be proud of… and to have fun.

I want to be able to come to work on a rainy day, sit in a big studio where everyone can listen to us on the phone, do great work, and be glad I am there.