The Four Seasons Hotel George V, Paris. The Peninsula Shanghai. The Ritz-Carlton, Tianjin. Besides being the ultimate in five-star luxury, what else do these three properties have in common? Their designer: Pierre-Yves Rochon. Born in the tranquil French region of Brittany and educated at École Nationale Supérieure des Beaux-Arts, Rochon employs a staff of 70 in offices in Paris and Chicago. The latter location has helped increase his stateside projects, including the Jade Signature, a residential tower in Miami, and the just-opened Waldorf Astoria Beverly Hills, his first L.A. project in more than a decade. Monsieur Rochon tells us more. 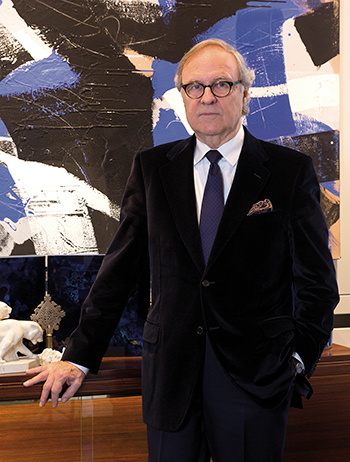 Interior Design: Did you always want to be a designer?

Pierre-Yves Rochon: Once upon a time, I wanted to be a movie director. But being an interior designer is like being a director, since we essentially create scenes down to their furniture and lighting.

ID: Who were early design influences?

ID: Why French and American offices?

PYR: Brittany, my home, was quiet, subtle, not trendy, like my work in a way. I live in Paris, which is the opposite of those characteristics, because it’s the only way to do business. The result is that my work is a mix of Gallic culture and American organization. That’s what makes success. Every project is different, and I can do all types.

ID: What are some favorite hotels?

PYR: I have many. The George V and the Four Seasons Hotel Firenze, and not because I did them. Also, the Hotel Bel-Air. I remember the very first time I was there, seeing the swan on the lake, smelling the wood smoke of the fireplace, the light blue of a couch.

ID: Tell us about the Waldorf Astoria Beverly Hills, the 12-story ground-up hotel done in collaboration with Gensler and Perkins + Will.

PYR: When I was doing research, I found that the 1930’s and art deco had a strong influence in L.A., ergo the black, white, and gold palette and some of the forms in the lobby. The 170 guest rooms are large, starting at 600 square feet, and always with a residential quality. There’s also a roof-top pool with cabanas, a La Prairie spa, a Jean-Georges Beverly Hills restaurant, a ballroom with event spaces, and soupçons of landscaping.

ID: What is an item you couldn’t live without?

PYR: Pencil and pen, but I love playing with the computer. I work in different ways.

PYR: Versailles. If one takes the time to thoroughly explore it, it’s extraordinary.

PYR: I’m working on it: the Waldorf Astoria New York. I stayed there many times. And, when I did, I’d always think to myself, maybe one day I will do this.