Having spent the majority of his 24 years at Christian Lacroix behind the scenes, designer Sacha Walckhoff stepped out of the shadows in 2010 when he was named the Maison’s Creative Director, responsible for pushing the brand in a new direction. Six years later, Walckhoff is enjoying much success with a rapidly expanding ‘Lifestyle’ department, which now produces tableware, stationery and scented candles. In addition, he has spearheaded licensed collaborations with a number of international brands including an exuberant fabric and wallpaper collection with Designers Guild, psychedelic carpets with Dutch brand Moooi and most recently, an elegant range of furniture with French brand Roche Bobois. We caught up with Walckhoff to talk about his new lifestyle launches for 2016 and how he maintains a clear brand vision across everything from fashion to furniture. 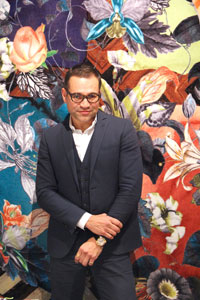 Interior Design: What was your inspiration behind your new carpet collection for Moooi?

Sacha Walckhoff: After the launch of our successful ‘Jewels Garden‘ carpet with Moooi last year, this year they asked us for a bit more. So we’ve created one round carpet in four different colorways and two broadloom carpets.

We began designing this new collection at the beginning of last year (January 2015) when it was a really terrible moment in Paris. It was just a few days after the Charlie Hebdo attacks and I must say it was really difficult to go into a new collection in such an ambience. But I went to a march after the attacks, which was really amazing because it gave us a lot of strength. The people of Paris were all together so it was a very strong experience.

I went back to the studio and I tried to find a way to make something positive. I said “let’s go back to history” and thought about the last time we had such a crisis in France, and I thought of the French revolution. So I began to dig in that moment to see how people reacted at the time. I started researching the Les Incroyables et Merveilleuses, who were a band of young people, who wanted to have fun after the revolution. The girls were half naked and wearing crazy outfits, the guys also had amazing exaggerated outfits with big collars, big stripes; everyone was wearing a little red string around the neck. It was bold, people were really reacting with all of their guts to what had happened. And it struck me that people like Joséphine de Beauharnais and Napoleon, they were very young. When Napoleon became a general he was only 26, so it was young people getting the power. They wanted very ‘bling’ things.

I thought “this is what we need; we need to react”. This really gave me energy and I tried to pass it on to my studio and so we began to work with colors from that moment in history. We found a book of antique textiles with amazing colors, almost fluorescent.

On top of that it was moment of reconstruction, so in the carpets you’ll see glimpses of architecture-a wall from the Palais Royal, the French parquet, and of course roses; roses were the flower that Joséphine de Beauharnais was crazy about-she had a beautiful rose garden with over 300 different varieties. Also you can see stripes which I’ve layered with the roses-by themselves some of these designs could be a bit kitsch but as soon as they have stripes on them then suddenly they have strength that they had not before.

SW: I’ve got my in-house studio but I also work with freelancers, some that I have worked with for a long time and some new that will change depending on the season and how we go together.

Technology of course now helps you to do any kind of colourways but those aquarelle layers-you need to do those by hand, then you can photograph it and create a digital version. It’s very important to me to still work like we did in the 20th century. I have worked with one artist in particular for many years. I give her the concept and she gets the idea. She comes back into the studio with all of her paintings and it’s quite overwhelming. We then rework them, cut them, collage them, it’s really a very tactile process. I need to touch the material, I am absolutely not working with computers at all. For the pieces I do on my own I’m designing by hand. There are less and less people actually using a pencil these days. It’s so funny to see that the new generation has been educated with machines and so now they use them for everything.

ID: Tell us about your relationship with Marcel Wanders, creative director of Moooi.

SW: At the beginning it was a friendship. From that friendship we began working on the first carpet last year and now we are expanding the collection. I think we have the same way of looking at things even if we are then making a translation which is different. Marcel has 100 ideas a minute and it’s exhausting. One day with Marcel and I have to sleep for two days after! I’m exhausted but it’s a wonderful exhaustion.

He gave me total free reign with the collections. He’s very easy to work with if you’re giving him something of quality, He’s been through so many ideas in 25 years that you cannot bullshit him at all. He’s a very creative guy but he’s also an amazing businessman.

ID: How do you ensure that you maintain a strong brand identity when working with so many different types of product-from fashion to furniture?

SW: At Lacroix we love to talk about the process but what is important is the result. It’s fun to talk about the inspiration and history but you don’t really need to know about it in order to enjoy the design.

I’ve been at Lacroix (as Creative Director) for 6 years now. I’ve been working many, many years with Christian and what I’m trying to do at Lacroix is to keep the ‘joie de vivre’, creating the unexpected; combining things that you would not normally mix together, all those things. But I’m not looking at the archives anymore because although I think they are amazing, I think that we need to produce for our own time-especially since things have been changing so quickly in the last 10-15 years. The fashion world I knew is not there anymore. So I need to express those same worlds with different graphics. It’s what I’ve been trying to do since working in this lifestyle department and I hope we succeed.

SW: Our furniture was launched in June and so now we have a big lifestyle collection. It’s great because five years ago we had nothing at Lacroix as far as lifestyle was concerned and now we have a whole department. I’m really enjoying it, it’s something I wanted to do for a long time so it’s great to be able to do it.

I designed everything for Roche Bobois in January. I did 18 pieces in 2 months and when they told me in January that the whole collection would be ready for April I laughed, because in my head I was imagining a 2017 launch. And they told me “No, we are able to do that.” I went to see their amazing factory in Portugal and I really got on with the boss of the factory, I could see he loved what he was doing. They’ve done an incredible job. I couldn’t imagine it would have been possible to produce it so quickly because there are a lot of different finishes and bespoke components; two rugs and 16 pieces of furniture including upholstery, wood furniture and so on. When they presented the collection to me in the factory it was very emotional moment because they had worked so hard, they were very proud. It was the same proud feeling you get when creating couture, because it’s a small team and you all care a lot. It’s a fashion furniture line, which is a very special kind of market, but I wanted to do something timeless, elegant and chic. It was one of the most difficult things I’ve done in my life.